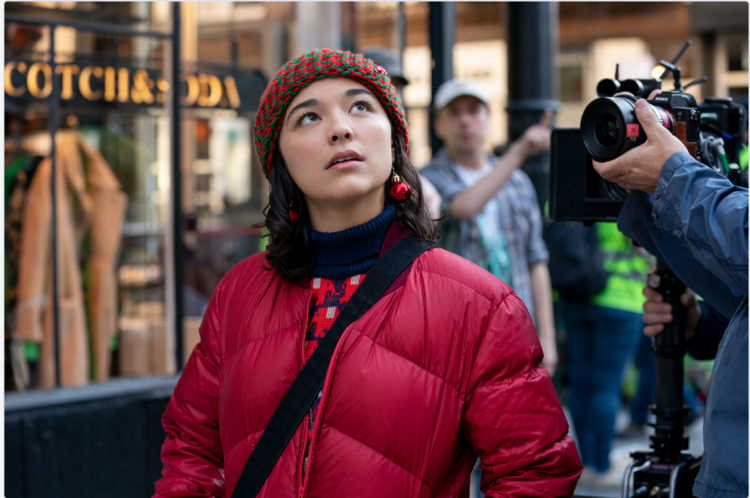 It is a rare thing when a piece of new holiday media comes out and it actually manages to make you feel like you’re snuggled under a warm blanket, sipping a mug of hot cocoa and hanging out with friends you have known your whole life. It may be a cliché to call it “the show that we need right now” but Netflix’s “Dash & Lily” is close to the perfect balm for a world in which the holidays just don’t feel like the holidays.

The names of the two title characters, Dash and Lily, allude to Dashiell Hammett and Lillian Hellman, a pair of mid-20th century novelists who fell deeply in love. Indeed, the show is obsessed with literature, with references to writers like J. D. Sallinger and characters like Cyrano de Bergerac. The Strand, perhaps New York City’s most iconic bookstore, even serves as a central location in the show, and is where this story starts.

“Dash & Lily” is close to the perfect balm for a world in which the holidays just don’t feel like the holidays.

When cheerful, optimistic Lily slips a mysterious red notebook onto a bookshelf in the Strand, the brooding loner Dash finds it and gets swept up into an adventure as Lily teaches him to fall in love with Christmas. Through most of the show, the pair do not meet in person, instead using the red notebook to trade dares, in exchange for which they begin to learn more and more about each other. It’s sort of a “You’ve Got Mail” for Generation Z.

That “You’ve Got Mail” comparison is an appropriate one. Nora Ephron’s classic 1998 romantic comedy starring Meg Ryan and Tom Hanks may not be the the film everyone thinks of when they think of Ephron’s filmography (see “When Harry Met Sally” or “Sleepless in Seattle”), but it is the clearest influence on “Dash & Lily.” Quite a few elements from “You’ve Got Mail” make their way into this show: the magical New York setting, star-crossed lovers who do not know what the other looks like. One of the leads even cites “You’ve Got Mail” (which itself was inspired by the 1940 film “The Shop Around the Corner”) by name.

It’s sort of a “You’ve Got Mail” for Generation Z.

“Dash & Lily” wears its influences on its sleeve, and you will find smatterings of other rom-coms in its DNA, from “Love, Actually” to “Notting Hill.” It is these obvious allusions that allow “Dash & Lily” to succeed where other Netflix romantic comedies tend to fail. “Dash & Lily” clearly loves the material it’s working from, while other films might be too caught up in attempting to replicate their sources’ constituent elements to understand why they work in the first place.

It helps that the sincerity of “Dash & Lily” extends far beyond its rom-com influences. It holds a deep, reverent love for New York. The show encompasses the whole city, taking the viewer everywhere from bookstores in Union Square to Christmas shows at Macy’s to cheese pie restaurants in Bay Ridge and nutcracker houses in Dyker Heights, both in Brooklyn. It’s a teenage fantasia, one in which young New Yorkers regularly go to mochi-making classes taught by Japanese grandmothers and Jewish punk concerts guarded by drag queens.

It is almost painfully evocative of the New York that has gone missing because of the pandemic. “Dash & Lily,” with its multiracial cast and city landmarks packed to the gills with holiday revelers, reminds us of the way New York is meant to be. The city we have lost is the one that “Dash & Lily” offers up as a pick-me-up, no matter how much of a fantasy it may be.

Dash & Lily is a New York teenage fantasia, with a reverent love for the city it celebrates.

This is not to say that “Dash & Lily” is quality television simply because it hits you at the right time. It is genuinely affecting, and the leads carry their roles admirably well. Austin Abrams’s Dash, with his sulky demeanor, sells you on his self-imposed isolation, but he also delivers a tingle of mischievous earnestness to the role that reveals there is more to this guy than meets the eye.

Midori Francis is a revelation as the quirky Lily, a character who might feel trite and stereotypical if handled less delicately. Ms. Francis imbues her with a humanity and an emotional generosity that feel all too real.

The cast is supported by career character actors like Jodi Long, as Lily’s eccentric godmother, and Broadway alums like Michael Park of “Dear Evan Hansen,” who plays Dash’s father.

Fred Savage, best known for acting roles in “The Wonder Years” and “The Princess Bride,” flexes his directorial muscles on this show, while “Casper” director Brad Silberling and the relative newcomer Pamela Romanowski round out this trio of directors. They all do great work. There are some very impressive displays of cinematic technique in this show: fusing two separate shots into one, flashback perspective flips, color grading manipulation and more. These repeated moments of filmmaking skill seem to exist to remind viewers that they are, in fact, watching something special.

“Dash & Lily” is a holiday series that believes in the magic of Christmas with a genuineness that is difficult to find in most other cookie-cutter Netflix releases. Because this one has that magic in spades, it manages to turn what might otherwise be a disposable rom-com into a genuine Christmas classic.