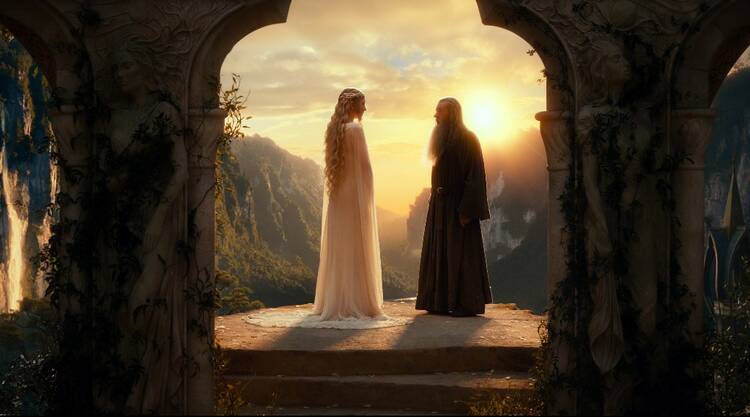 I turned the 1,781 pages of the works of J. R. R. Tolkien with some pangs of guilt. I felt that we all had more pressing things to do than slip away from the world of our daily experience—turning our backs on the inner city to tramp over and under the Misty Mountains with hobbits, ores, trolls, elves and deep-throated singing dwarves.

Hobbits, as everyone now knows, are little people—between two and four feet tall—with lackadaisical ways and furry feet. They eat six meals a day, smoke pipes and live in holes. They pop from the lore of J. R. R. Tolkien, British philologist, author of The Hobbit and the trilogy The Lord of the Rings, the in-cult best-selling paperbacks in America today. Tolkien enthusiasts scrawl the name of their hero-hobbit on subway walls: FRODO LIVES. They memorize genealogies of dwarf kings and decipher the language of the elfin song: "Ai! laurie lante lassie surimenl" Why?

For one thing, they like the story. Long ago, in the Third Age of Middle-earth, a resourceful hobbit gained possession of (stole) the One Ring of Power that had been forged in Mount Doom by Sauron, Dark Lord of the Dark Tower of Mordor. The ring makes its wearer invisible, heightens his sensory perception, and somehow gives him power over the rings of the other lords and kings. But, like all power, the power of the ring sooner or later devours its possessor. At the Council of Elrond, the Free People of the World—hobbits, elves, dwarves and men—decide the ring must be destroyed. They designate young Frodo to lead the Fellowship, carry the ring back to its source, throw it into the fires of Doom. In the course of the journey into the bowels of Mordor, the Fellowship is broken up by
defection and the Great War. Frodo carries on. Gandalf the wizard plummets to death in battle with a fiery balrog and comes to life one volume later. Frodo seems to perish in the clutches of the monstrous female Shelob. At the climax of volume three, The Return of the King, an invisible Frodo grapples with the evil Gollum on the edge of Doom's volcanic abyss. Gollum bites off Frodo's finger to get the ring, then topples with his prize into the depths. The Quest is over. The World—for the time being—is saved. Whew!

The over-all theme offers primitive, though deceptive, reassurance, especially to the young. Sin carries with it its own punishment. The individual with a mission, who strikes out on his own, will succeed. These books are loaded with Arthurian, biblical and apocalyptic imagery; yet Tolkien denies his romantic tale has any allegorical significance. He intends no reference to the atomic bomb, the arms race, the United Nations or World War II—or World War III. Rather, Tolkien glories in his irrelevancy. He has created a nether world, complete with language, Urhistory and elaborate maps, which is its own excuse for being. Plus 135 pages of appendices—a treasure of trivia for pseudo-scholarly digging and sterile cultish chatter. Yet Tolkien's poetic and narrative gifts are so compelling that many readers move anxiously through the magnificently described events half-convinced they are having an esoteric, as well as pleasurable, experience.

To some critics, Middle-earth is anti-feminine, antitechnological and anti-human. A trip there is a conservative retreat to a simplistic view of reality where the lines between good and evil are clearly drawn and the irresponsible reader is freed from personal involvement or choice. To others, the excursion is more like a spiritual retreat. In the hobbit shire and in the journey down the Great River, we recoup our psychological resources by rediscovering, for once, a world over which we have at least some imaginative control. Then we bounce back, like Frodo, and muddle through life with our ordinary talents to cataclysmic victory.

I found The Lord of the Rings too long, too cluttered, too much. Still, to me, the value of Tolkien is not the very dubious value of psychological escape; but a reinvitation to myth: a symbolic representation in story form of a present reality, drawing our attention to a hitherto unnoticed dimension of our common existence. Myth reveals truth, just as a smile or a gesture reveals love. These books make it more exciting to walk in the woods.

The Lord of the Rings reveals in a unique way man's affinity with the most elemental forces of his environment. At the same time that it points to the cosmic and timeless character of private greed, it invites man to witness with new eyes the secrets of the earth. Meanwhile the fate of the ring-bearer warns us against spiritual idolatry—making power the object of our ultimate concern.