Review: ‘The Glorias’ portrays a feminist icon in four ways (and with few flaws) 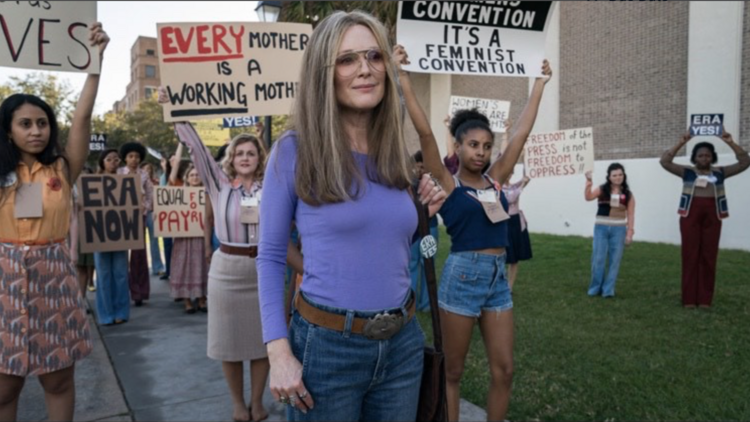 “The greatest thing of all is a sense of injustice,” Bella Abzug says to Gloria Steinem in “The Glorias.” “You have it, and I think it’s fantastic.”

In the wake of Ruth Bader Ginsburg’s death, and looking toward a possibly bitter battle surrounding a Supreme Court nomination that could mean the end of Roe v. Wade, a biopic about Gloria Steinem feels eerily timely. Based on Ms. Steinem’s 2015 memoir My Life on the Road, “The Glorias” chronicles a long and full life that exemplifies just how far that famous sense of injustice can go.

Ms. Steinem is played by different actresses at four different ages throughout the film. As a young child, she is played by Ryan Kira Armstrong. Lulu Wilson plays a teenage Gloria attempting to navigate challenging family dynamics. Academy Award winners Alicia Vikander and Julianne Moore tackle the challenges of portraying her adult years from her 20s to 40s and beyond. Scenes weave between telling Gloria’s life story and showing the four versions of her self riding a bus together. The characters sometimes enter into dialogue and attempt to make sense of the important moments in their life.

"You have a sense of injustice, and I think it's fantastic."

By showing Steinem at different ages and stages of life, the film portrays a multifaceted woman. In the couple of hours we spend with her, we meet Gloria the journalist, world-traveler, daughter, friend and reluctant spokeswoman of the feminist movement. Gloria was co-founder of Ms. Magazine, which coined “Ms.” as a title women could use regardless of their marital status. She became a household name thanks to her work in the women’s movement, fiercely advocating for reproductive rights (another term she coined) and women’s liberation.

Fascinatingly, we see that hers is a story of tremendous personal growth over time; the young Gloria we meet is far from the confident, outspoken, unapologetic advocate that the world knows today. The different “Glorias” throughout the story allow women of all stages in life to find themselves, setting Ms. Steinem up as an everywoman who truly contains multitudes.

The film introduces us to many other women who, though not quite the cultural icons Steinem became, made significant contributions to women’s rights and other social issues. Among them are congressional representative Bella Abzug, labor leader Dolores Huerta, the first female principal chief of the Cherokee Nation Wilma Mankiller, child welfare and civil rights activist Dorothy Pitman Hughes and lawyer Florynce Kennedy, a fiery educator who articulated the connections between different social issues, such as racism and sexism. The film avoids overcrowding by defining each of these women clearly and casting actresses who make them distinct, passionate and memorable. Bette Midler as Bella Abzug and Lorraine Touissant as Florynce Kennedy give standout performances.

The young Gloria we meet is far from the confident, outspoken, unapologetic advocate that the world knows today.

The collaboration of director Julie Taymor and Sarah Ruhl on the film’s screenplay employs theatrical techniques that bring the story to dynamic life. The central image of the bus trip, with its gray-tinged cinematography and its position outside of the chronological narrative structure, allows for a type of creative communication between characters that might be found on a theater stage. Other scenes take on a surrealist feel in the middle of narrative storytelling. When those work, they really work. When they don’t, they really don’t. An interlude where Gloria embodies the sexual fantasies of an interviewer who objectifies her is particularly bizarre. But the unapologetic nature of the scene makes it memorable and thought-provoking.

For some reason, you spend a lot of this movie waiting for Gloria to do something bad. Perhaps that is because of her decades as a controversial public figure; or maybe it is because other depictions of her in popular culture reveal character flaws, whether they are true-to-life or made for TV. But this Gloria is, throughout, exceedingly kind, smart, determined and selfless.

For some reason, you spend a lot of this movie waiting for Gloria to do something bad.

She sometimes comes off as so unproblematic that you become suspicious of how she is being portrayed. It leaves the viewer wondering if all of the controversial debates Ms. Steinem has courageously engaged in received a full, nuanced treatment in the film. In this depiction, Gloria is an inclusive feminist without blemish. She is portrayed as constantly sensitive to her standing as a middle-class elite white woman in the movement. This awareness propels her to amplify the voices of Black women, Native American women, poor women—women all over the world.

One of the most surprising and powerful scenes in the film is a conversation between Dolores Huerta and Gloria. Dolores Huerta fought alongside César Chávez as co-founder of the National Farmworkers Association, and she first appears in a scene where Gloria and Dorothy Pitman Hughes are supporting her labor rights work. Later, though, they stand at odds when Dolores attends Phyllis Schlafly’s counter-conference to the 1977 National Women’s Conference. The women’s conference organized by Gloria-and-crew controversially voiced its support for abortion.

Gloria concedes to Dolores that, in her view, no one sees abortion as a pleasant thing.

Dolores and Gloria have a heart-to-heart about their respective stances. Dolores, a devout Catholic and Latina mother of 10, played touchingly by Monica Sanchez, is clearly disturbed by the rhetoric surrounding abortion. As an anti-abortion advocate and champion of economic justice for workers, though, she struggles to find a home at either conference. She confesses to Gloria that the people surrounding her at the counter-gathering, raising their voices in opposition to abortion are, in many cases, the same right-wing advocates that abhor and discredit her work for farmworkers’ rights. She also brings up important questions about the expansiveness (or lack thereof) of the pro-life activism she is engaging with: “What are they doing, and what’s the church doing, to help raise children once they’re born?”

Gloria’s response, too, is surprising. Julianne Moore’s performance portrays her as an attentive, respectful listener who sees why Dolores is coming up against a moral roadblock. Gloria concedes to Dolores that, in her view, no one sees abortion as a pleasant thing. The exchange between them displays a kind of connectedness and respect for differences that we don’t see anymore in contemporary political discourse.

Steinem is shown giving a sermon at a Catholic parish, an event which really happened.

A later scene shows Gloria giving a homily, to the shock of many parishioners, at a Catholic church (an event which really took place). She critiques the church’s patriarchal history while highlighting the ways in which sanctity can be seen in women and nature and the power of a movement for justice. (Not long after, we see a headline announcing the pope has banned homilies by laypeople.)

Perhaps the most effective (and infuriating) scenes in the film are those in which powerful men underestimate the capabilities and depth of Ms. Steinem and her comrades. In her first job at a magazine as a young college graduate, she is assigned to a fashion story she has no interest in. Viewers cannot help but feel frustrated when Gloria’s academic qualifications, gifts for storytelling and international travel experiences are dismissed outright—and she is relegated to duties like ladieswear journalism. (“You’re nothing like our lady readers, but you’re female, so try to put yourself in their shoes for this next assignment.”)

How can we get beyond the battle of the sexes?
Simcha Fisher

Even as she comes to be respected in her workplace and the world of journalism, men continue to pepper her with exasperating compliments like, “You write so well… almost like a man!” By the film’s end, as male TV anchors and politicians are still saying things like, “I just wish Gloria would find a nice chap and relax,” the viewer will have no difficulty understanding her frustration as righteous indignation.

The ending reveals the destination of the bus ride for the four Glorias, which is worth keeping a surprise. All that needs to be said: their impact on generations of women to come (and their ability to organize and advocate for themselves) becomes very clear. As the credits roll, the faces of the many women Gloria connected with throughout the film flash across the screen, reminding us of her words: “A movement is lots and lots of people moving, not one person being photographed.”

While the film depicts one woman’s extraordinary life, it leaves you with a reminder of the power and contribution of women everywhere.