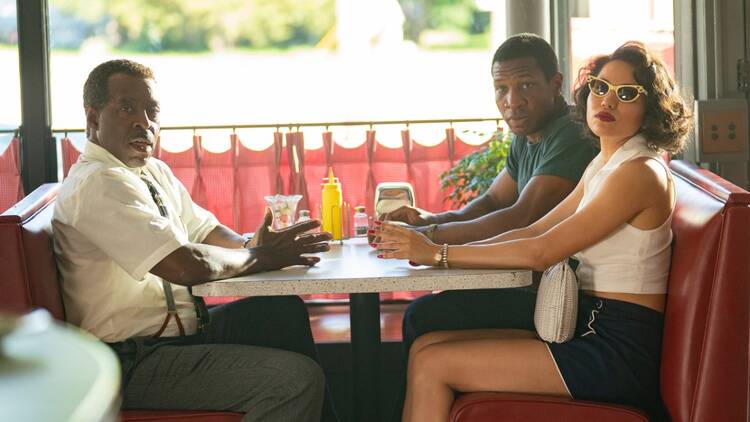 Earlier this month, at its annual celebration of science fiction writing and editing, the Hugo Awards created an uproar. The organization gave posthumous awards to the horror writer H. P. Lovecraft and the longtime editor of Astounding Science Fiction magazine, John W. Campbell, both major figures in 20th-century science fiction whose work was at times deeply racist, xenophobic, anti-Semitic and terrible to women.

During the awards, host George R. R. Martin and other older white men rambled endlessly in praise of the two without remarking on their problematic histories. Martin also had trouble pronouncing the names of other award recipients who were people of color.

It was, in its own toxic way, a perfect introduction for HBO’s new 1950s sci-fi/horror series, “Lovecraft Country.” The pilot, which debuted last Sunday, is built around a dream and an awakening. Atticus Freeman, a Black Korean War veteran, dreams he is in a war zone whose forces are being pummeled by various monsters of science fiction—the spider-legged aliens from “War of the Worlds,” little-green-men-style flying saucers, a giant flying squid known as Cthulhu.

It is the definition of weird. And yet we soon discover that the series also captures the experience of being Black in America during this period. As Atticus travels across the country with his friend Leticia and Uncle George (who writes a “Green Book”-esque travel guide used by Black people to know where it is safe to dine, stay, get gas), they face a series of escalating threats from white people, culminating in finding themselves in a “sundown county,” a place from which Black people must leave before sundown or else find themselves arrested, assaulted or killed.

There were in fact many such “sundown towns” in 20th-century America, and not just in the South. Illinois alone had 150. Half of the counties along Route 66 were sundown communities. Much like the Tulsa Massacre opening of HBO’s recent mini-series “Watchmen,” or the experiences of modern-day Black people depicted in Jordan Peele’s 2017 film “Get Out,” “Lovecraft” argues you don’t need to look beyond reality to uncover a tale of horrors. “This is a story of a boy and his dream,” a narrator tells us at the beginning. “But more than that, this is the story of an American boy and a dream that is truly American.”

At the pilot’s end, our characters find themselves, along with the racist cops who were about to murder them, being hunted by a pack of actual monsters.

But alongside laying bare the truth of this “American nightmare” (which tragically continues today), “Lovecraft” is also very much about waking up. Soon after meeting Atticus we turn to his Uncle George, who we find in bed with his wife Hippolyta. Their introduction is in every way the opposite of Atticus’s—ordinary, domestic. And yet there is something striking about the moment, too. When was the last time you saw two middle-aged characters intimate in bed together in a TV series, let alone two middle-aged people of color? It just doesn’t happen.

The scene defies other Hollywood conventions. George has no shirt on, and has the weight on him of a normal middle-aged man. When he and his wife kiss, rather than the standard Lip Lock for the Ages, it is a little bit messy. The whole scene has the kind of familiarity and easy sexuality that many long-married couples know and yet Hollywood very rarely depicts.

At the pilot’s end, our characters find themselves, along with the racist cops who were about to murder them, being hunted by a pack of actual monsters. The sequence has a very “Jurassic Park” vibe, pulpy and over the top in comparison with the incisive social history that has come before.

“Lovecraft Country” promises to be a hard-hitting story about race in America. But it is also very clearly a story about American stories.

But there is no moment in any of the “Jurassic Park” films where three Black characters together do anything, let alone stand at the center of the story and save the day. (In fact there have only been five Black characters in the first five “Jurassic” films, as well as a handful of other people of color.) The longer they battle on, the more we are made to see how absolutely and shockingly white the canon of science fiction and fantasy movies is.

Placing three Black characters at the center of the story also yields fresh, unexpected turns. From the moment we meet George in bed with his wife, it seems abundantly clear he is going to die. “What’s come over you?” his wife says as he starts kissing her. “You’re only going to be gone a few days.” He might as well have the Grim Reaper walking three paces behind him.

As the story plays out, we see that he is too trusting, too slow. When the monsters arrive, he can’t keep up with his friends. The mandate of the narrative is clear.

But the pilot refuses to follow it. Atticus and Laetitia will not leave George behind. And it turns out his experience in the woods gives them the key to their survival.

“Lovecraft Country” promises to be a hard-hitting story about race in America. But it is also very clearly a story about American stories. In their opening sequence George tells his wife, “I can’t remember the last time we made love in the light of day. I want to see my wife.”

His words express exactly the aspirations of this show: to allow people of color to be seen in genres and ways American conventions have denied them, and to allow those genres to be transformed by the experience.