In ‘Boys State,’ politics is not child’s play 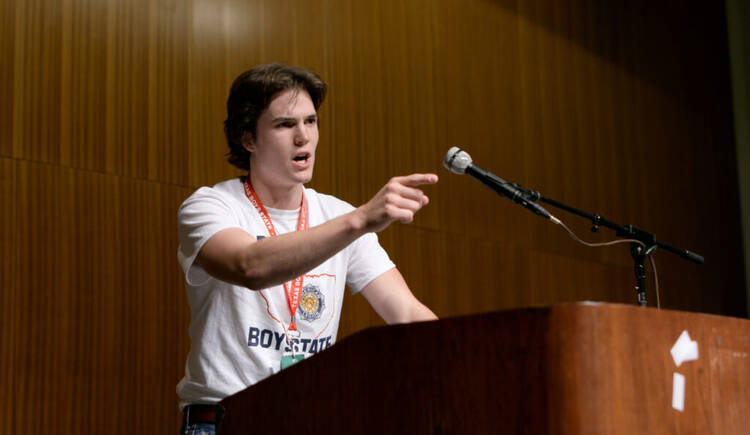 What makes a successful politician? This is an important question both in our current election cycle and for the 1,100 young participants of Texas Boys State, an annual exercise in democracy and government-building sponsored by the American Legion. Democracy is fraught with conflict, and as filmmakers Jesse Moss and Amanda McBaine reveal in their award-winning documentary “Boys State,” politics is a competitive sport.

For over eight decades, the Legion has offered high school-age students the opportunity to form party platforms and engage in mock elections in what is effectively a weeklong political summer camp. Participants are randomly assigned to one of two faux political parties, the Federalists or the Nationalists, and are tasked with electing their leaders and drawing up policy positions.

In a new award-winning documentary about Texas Boys State, democracy is fraught with conflict.

With an emphasis on civility and education, the Legion presents its boys’ and girls’ programs as a balm to the kind of banal, pugnacious crosstalk that has become a hallmark of cable news television and the wider American political discourse. Alumni of the program include President Bill Clinton and Supreme Court Justice Samuel A. Alito Jr.

Mr. Moss and Ms. McBaine told America that they aimed to focus on individual participants to create a more intimate and dramatic tale. Filming was an arduous process, with the filmmakers amassing a vast amount of footage and then finding the story through the editing process. “We want to be uncomfortable, we want to be kind of off-balance, because I think that’s where the interesting stuff happens,” said Ms. McBaine.

Armed with numerous camera operators, they set out to focus on the most “ambitious, politically sophisticated kids.” Ben Feinstein, Steven Garza, Robert MacDougall, René Otero and Eddy Proietti Conti emerged as five of the most engaging characters. Mr. Feinstein—a bilateral amputee with aspirations to join the F.B.I., the C.I.A. or perhaps the Department of Defense—is a skilled politician, studying footage of Ronald Reagan and making passionate speeches to his peers. His efforts culminate in his election as Federalist Party chairman.

Appeals to the Reagan Era and “red-blooded” Americanism is a successful strategy to woo the overwhelmingly white, mostly conservative participants of Texas Boys State. Mr. MacDougall, the charismatic Nationalist leader and a former U.S. Senate page for the Republican Party, makes strong support for gun rights a major issue of his campaign. Eddy Proietti Conti, a Federalist candidate, is compared by several people to conservative radio host Ben Shapiro, while another boy describes himself as “a right-wing libertarian and big-time capitalist.”

Mr. Garza and Mr. Otero, however, are exceptions to the conservative bloc. The Hispanic son of an immigrant mother, the usually reserved Mr. Garza calls himself “a progressive person” and earns the Nationalist nomination for governor due in part to a rousing speech. He was a supporter of Senator Bernie Sanders for president, and he admires Napoleon Bonaparte for his “ambition.” Mr. Otero, a Black student from Chicago who becomes Nationalist chairman, makes repeated attempts toward bipartisanship. He also addresses the racial disparity here: “I’ve never seen so many white people, ever.”

“You put people in a position of power and they’re going to act accordingly.”

This political lesson and social experiment begins innocuously enough. The boys practice politics by making ridiculous proposals, like allocating $15 billion for defense against space aliens and changing the pronunciation of the letter “W” to “Dubya” in Texas. But it doesn’t take long until the film transforms into an examination of what American politics is really all about: power. “Boys State” becomes a game of sly political maneuvers, catchy slogans, meme wars, posturing, racist rhetoric and talk of impeachment. If your opinion on a particular issue is unpopular, find another one. Win, win and win.

The Federalist faction uses Mr. Garza’s prior involvement with the March for Our Lives to paint him as anti-Second Amendment. Like a budding Lee Atwater, Mr. Feinstein begins an aggressive campaign stoking divisions and conducting ad hominem attacks. These “shock and awe” tactics, as he calls them, prevail and the Federalists win the governorship.

Speaking with America, Mr. Otero compared Boys State to the 1971 Stanford Prison Experiment: “You put people in a position of power and they’re going to act accordingly.” He said Boys State helped to “contextualize why I don’t want to do politics.” Mr. Feinstein described the experience as like being in a “perpetual crisis” that required constant motion.

But Mr. MacDougall finds some areas of positivity. “It’s my hope that most people take away a message of optimism and hope from this film,” he said to America. “[It shows] that 1,100 young men can have intelligent, informed and civil conversations with each other…. They can come to agreements and move forward.”

Released in the context of a chaotic, vitriolic political season, “Boys State” is both a riveting look at the more vulgar machinations of the political process and a portrait of conscientious young men attracted to public service for varying reasons. It is through this complexity that the film becomes a rich tapestry of intersecting lives and ideals.

Said Ms. McBaine: “Government is not an easy story to tell.”

Ryan Di Corpo is a former Joseph A. O'Hare Fellow at America.