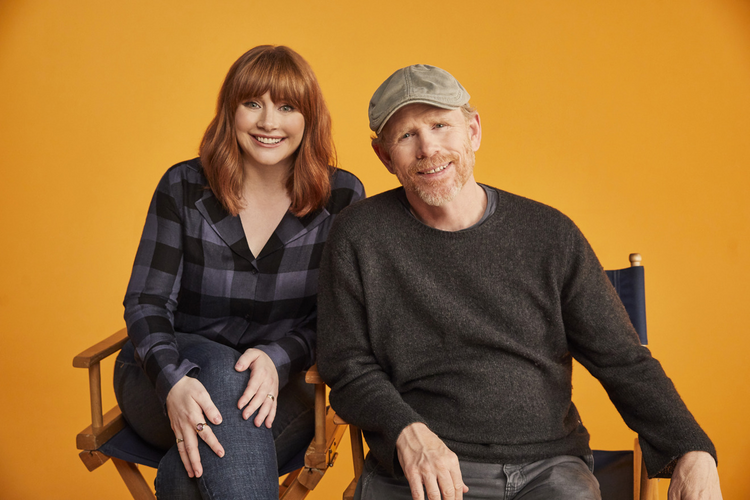 Bryce Dallas Howard with her father, producer Ron Howard, on the set of the documentary "Dads." (Courtesy of Apple TV+)

How do we define the role of a father? This is the central question of “Dads,” the heartwarming directorial debut of Golden Globe nominated actress Bryce Dallas Howard. Ahead of her film’s release June 19 on Apple TV+, Ms. Howard, known for her roles in “The Help” and “Jurassic World,” spoke to America about what inspired her latest project and the continually shifting role of a father in contemporary society.

Ms. Howard (the daughter of director Ron Howard) begins the documentary by asking her numerous participants a short but complicated question: What is a father to you? I asked her the same question. “A father is a caregiver, otherwise he’s not a father, he’s a man,” said Ms. Howard.

Beyond the professionally filmed panoply of celebrity fathers interviewed for this project (including Jimmy Fallon, Neil Patrick Harris, Patton Oswalt and Kenan Thompson), the majority of the documentary utilizes iPhone video and archival footage—including scenes from Ms. Howard’s own birth—that fathers filmed of their daily lives.

“I was really interested in the daddy blogger community, because that’s new. These are guys who are fathers, but they’re also storytellers and they’re filmmakers, because they’re capturing their stories and finding ways to share them,” she said.

Dad blogs—such as Fatherly, All the Young Dads and No Idea What I’m Doing: A Daddy Blog—have become more popular in recent years. The 2015 HuffPost article, “10 Must-Read Blogs for New (and Experienced) Dads,” provides a sampling of fathers documenting their struggles and triumphs for a public audience. The advent of new technologies like iPhone cameras and the increasing popularity of vlogs made a documentary like this possible.

A major strength of “Dads” is its commitment to tell more than one type of story, profiling fathers from different countries, ethnic backgrounds and sexual orientations.

“Ten years ago, I don’t think this movie even could’ve existed. It would’ve been totally different,” she said. “[It’s] remarkable that folks are shooting feature-film quality documentary footage just totally on their own, without a crew, without oversight. And it’s exquisite. It’s beautiful.”

A major strength of “Dads” is its commitment to tell more than one type of story, profiling fathers from different countries, ethnic backgrounds and sexual orientations. Subjects include vlogger Glen Henry from San Francisco, Calif., Robert Selby from Triangle, Va., and Shuichi Sakuma from Tokyo, Japan.

“I definitely wanted [‘Dads’] to have an international aspect, so we could see what it’s like to [be a] father in this situation, in this circumstance, in this part of the world. So there was that variety and that diversity of experience,” explained Ms. Howard. Part of this concept, Ms. Howard says, was inspired by the 2010 documentary “Babies,” which profiled infants from the U.S., Mongolia, Japan and Namibia.

“Dads” also discusses how the role of the father, especially in American society, has changed over the past several decades. According to 2018 data from the Pew Research Center, there has been a “modest increase” in stay-at-home fathers since 1989, from 4 percent to 7 percent. But a 2019 report from Unicef listed the United States as the least generous country for paternity leave, offering fathers zero weeks of paid leave as opposed to Canada, which offers five to eight weeks. Leave provided by the Family and Medical Leave Act is unpaid.

Conan O’Brien, in talking about how if he saw his father at school it meant “somebody died or [he] was in incredible trouble,” refers to the change in father’s parenting styles as “a pendulum swing.” Ms. Howard agrees, specifically describing a generational change in how fathers are depicted.

According to 2018 data from the Pew Research Center, there has been a “modest increase” in stay-at-home fathers since 1989, from 4 percent to 7 percent.

“When my dad did ‘The Andy Griffith Show,’ such a huge part of that show was the relationship between Andy and Opie. If Opie’s mother was alive, would they have had the same dynamic? It’s not that Andy would be less present as a father, or less caring as father...but the way in which that relationship would’ve been portrayed in the media would’ve been different,” she said.

“Society is changing and acknowledging how important it is to support our fathers.”

Ms. Howard says she hopes to direct more documentaries in the future and she is currently preparing one inspired by her mother, Cheryl. But “Dads,” which arrives just in time for Father’s Day, is an impressive debut and timely portrait of fatherhood in flux.