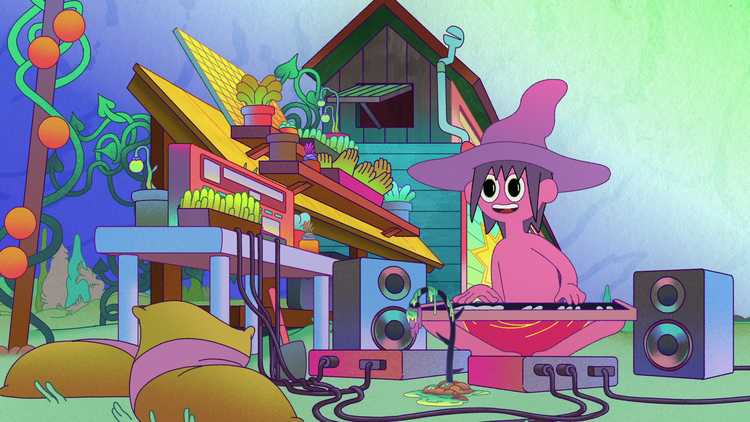 When I first decided to watch “The Midnight Gospel,” a colorful, adult-oriented sci-fi voyage into the multiverse co-created by Pendleton Ward of “Adventure Time,” I strapped myself in for a goofy, bingeable Netflix comedy. My expectations were met, but I was caught off guard by the show’s artistic experimentation, nuanced spiritual message and deeply moving season finale.

At first glance, the show seems like just another psychedelic adventure show that you might find on Adult Swim. The show follows Clancy, a podcaster who owns a virtual reality machine with thousands of simulated worlds that he visits to interview simulated beings.

I was caught off guard by the show’s artistic experimentation, nuanced spiritual message and deeply moving season finale.

In the first episode, not long after Clancy sets up his camera drones to interview a simulated president of the United States—during that world’s zombie apocalypse—I realized something was different about the show. The conversation felt too fluid to be scripted, and not all parts of the conversation were coherent with the world within the show. It was strange that Clancy and the president could have a relaxed conversation about drug use while fighting hordes of zombies, but I was quickly sold on this experimental style of storytelling.

Halfway through the episode, I had to Google exactly what was going on, and my suspicions were confirmed. “The Midnight Gospel” takes audio from a real podcast: “The Duncan Trussell Family Hour,” with Trussell as the host and voice of Clancy. The audio is edited, animated and supplemented by new dialogue from Trussell and his guests to fit the conversation into an adventure in Clancy’s simulated multiverse. The guests are not voice actors but real-life doctors, spiritual advisors, writers and other experts. They all play their roles seamlessly and help sell the world Trussell and Ward have built.

The result is a new TV experience that can be enjoyed as both a podcast and an animated adventure. It brims with silliness and seriousness, depth and superficiality, all magically coherent thanks to its disciplined pacing and free-associative style.

At first glance, the show seems like just another psychedelic adventure show that you might find on Adult Swim.

Trussell selected clips from his podcast that cover a range of topics, from drug use and magic to spirituality and death. But all of these topics seem to be organized around different ways to manage or even transcend suffering.

Clancy, a proxy for Trussell or at least an aspect of his personality, seems to be in the business of simulation for this very reason. He finds refuge in this immaterial world from the suffering he experiences in the material world—to the detriment of his real life, as he ignores both calls from his sister about money he owes her and the glitches in his computer.

Besides using drugs and virtual reality, Clancy takes on the spiritual practice of meditation as a kind of escape, both from his suffering and from his worldly obligations. At one point, Clancy emerges from one of his adventures and kicks back, proclaiming, “I’m enlightened now!” after a mere five-minute discussion with a spiritual mentor. He tells his computer to “call me Clancy, the Enlightened One.”

Clancy takes on the spiritual practice of meditation as a kind of escape, both from his suffering and from his worldly obligations.

This moment is genuinely funny because of Clancy’s complete lack of self-awareness. Clancy thinks of “enlightenment” as an instant fix: no more work, no more need for self-improvement, no need for help from spiritual leaders, community or a higher power. For Clancy, the important thing is that he can say he’s enlightened.

This self-delusion quickly backfires. Reassured that he has done all the work he needs to do, Clancy fails to address his underlying problems. His bad habits worsen, his relationship with his sister deteriorates, and his escapism deepens. He discovers that spiritual enlightenment is not a one-and-done, “Eureka!”moment. Human beings are not perfect—there is always more work to be done.

A recent episode of the Vox podcast “Future Perfect” uses a term that diagnoses Clancy’s very problem: “spiritual materialism.” The show’s host, Sigal Samuel, explains: “If all one is after is a temporary refuge from suffering, there is a term for that trap: spiritual materialism, where you’re just getting into meditation because you want some temporary material benefit or attainment.” This term, coined by Chögyam Trungpa Rinpoche, a major transmitter of Buddhism to the West in the late 20th century, was meant to apply to Buddhist spirituality (a recurring focus on “The Midnight Gospel”), but it seems applicable to other spiritual disciplines as well.

The final episode of “The Midnight Gospel” moved me in a way I was not prepared for, pushing this new medium to its emotional limits.

This is precisely how Clancy uses virtual reality, drugs and meditation. He can ignore his sister’s calls and his computer’s problems since he retreats from the material world for most of his waking hours. Paradoxically, Clancy’s hunt for immaterial transcendence becomes a kind of materialism, since it is grounded in his dissatisfaction with reality.

Clancy acts this way in spite of the advice from the guests he interviews. In Episode 5, an avian psychopomp offers advice about trying to use spirituality for other purposes. “Any spiritual practice that’s…trying to get to something—‘I’m going to become more spiritual, I’m going to become more loving, and I’m gonna make some change, I’m getting points somehow’”—is comparable to “grinding in World of Warcraft…. You’re adding experience points to a character that doesn’t...exist.” (In video games, “grinding” is a term for meaningless, repetitive tasks.)

In other words, if we think that the purpose of spiritual practice is to improve our condition in this life, we are mistaken. In Buddhism, this is because the separation between the self and others is illusory. But the advice is relevant for Christians as well. Using spiritual practice merely to make our lives better now distracts us from the life to come.

‘I Lost My Body,’ up for best animated Oscar, is a moving meditation on grief
Mike Seay

The deep spirituality of ‘Avatar: The Last Airbender’
Maeve Orlowski-Scherer

The final episode of “The Midnight Gospel” moved me in a way I was not prepared for, pushing this new medium to its emotional limits. It features Trussell’s late mother, written and animated around audio from when she was a guest on “Family Hour.” Trussel and his mother age and transform in the course of the episode through a cycle of life, death and rebirth. This provides a deeply personal look into their real-life relationship and the ways they dealt with her terminal cancer. (Her advice for Clancy/Trussell on coping with her death: “You cry.”) By the end, it seems Clancy has made some progress away from spiritual materialism.

The crudeness of the show’s dialogue and animation may be difficult for some viewers to watch. But behind all the zombies, sentient pie monsters and parasitic robot clowns, there is a deeply relatable spiritual journey rooted in the hope of avoiding suffering. The show delivers a surprisingly mature message through its immature packaging, reflecting Clancy’s own path of growth.

True to its name, “The Midnight Gospel” is a show best watched at midnight, when your mind is more receptive to trippy animation and life advice from talking birds, hippo-sized deer-dogs and ground meat.

@sikemeaymseay@americamedia.org
Show Comments ()
Join the conversation: Login or create an account
Before you can comment, you need to update your profile to include your first and last name, as required in our comments policy. Then reload this page and you'll be set up for commenting. Update your profile