‘Joan of Arc’ is one weird work of hagiography 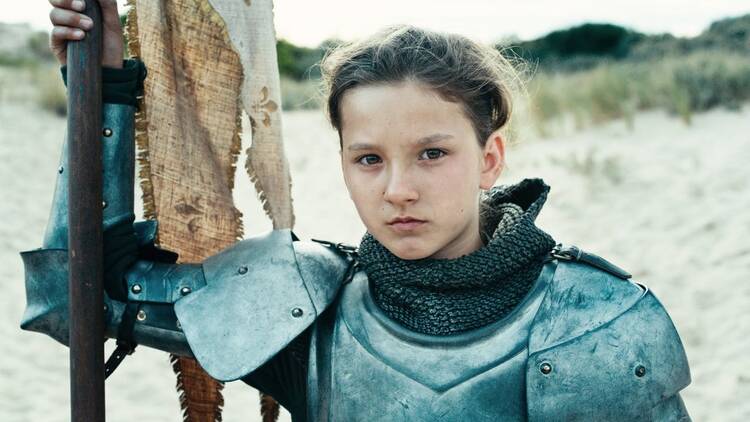 Bruno Dumont’s 2017 film “Jeanette: The Childhood of Joan of Arc” may be the weirdest hagiography ever filmed. Dumont’s film, which features nonprofessional actors from his native northern France, shows us a little child who (like so many little children) grapples with the thorniest theological questions: Why hasn’t God stopped the violence and injustice all around me? How can we be happy? If some are damned, how can I trust God?

Her visions are shown on screen—in the world of the film they are as real as the sheep. Dumont has said that movies can “look beyond the visible to explore something that reason can’t.” Jeanette’s visions are a complete overturning of expectations, as bizarre as the living God. In the film’s most memorable sequence a nun, played by twins, sings rapid-fire theology over a heavy-metal guitar riff and then headbangs alongside the Maid of Orleans.

The director Bruno Dumont has said that movies can “look beyond the visible to explore something that reason can’t.”

Now Dumont has released the second film in his diptych, “Joan of Arc.” Many of his previous techniques remain. Small countryside locales become the sites of epic struggle; detailed costuming combined with spare settings make the film feel at once theatrical and lived-in. Again we notice the shocking youth of Jeanne, the saint-to-be (Lise Leplat Prudhomme). Centered shots, exaggerated speaking styles, strange musical choices, human littleness in vast expanses—all of that is there. And yet, in “Joan,” these techniques are deployed to show not a vision-pierced world but a secular one. “Joan” is more psychological than hagiographic, and so I suspect it will be less revelatory than its predecessor, even for secular audiences.

The films are based on two works about St. Joan by the turn-of-the-century French poet Charles Péguy; between the two he became a practicing Catholic. Dumont himself has said he is not a believer, that “cinema is my religion.” In “Joan,” if God is there, he hides behind the sun; if he is anywhere, he is in our longing for him.

In “Joan,” if God is anywhere, he is in our longing for him.

“Joan” covers far more territory than the previous film, which may explain why it feels patchy, leaping from one thing to the next. The powerful opening episode, in which Jeanne begins to learn the true, horrifying character of her follower Gilles de Rais (a Manson-eyed Julien Manier), seems to be setting up a contrast between the purposes for which others wish to use Jeanne and the purpose for which God has sent her. Some follow her standard because they want land and glory for France; some want to curry favor with the king; some, like de Rais, lick their chops at the prospect of plunder and rape. But for Jeanne the only point is the command of God. (The historical de Rais did fight alongside Joan; he was later hanged for the serial rape and murder of children. He may be the origin of the folk tale “Bluebeard.”) After de Rais encourages her to feed the soldiers’ vilest instincts in order to get them to fight hard, she says she would rather lose than win that way.

And yet in later episodes this conflict disappears, and we never revisit either the involvement of de Rais or the choice among serving king, country or Christ. Instead we see unconventional battle scenes, in which a defeat is shown through the action of a single figure on a horse; a major clash is depicted as dressage, like a horse ballet. We see much of Jeanne’s trial, where she guards her secrets like a child, loses her temper like a child. This is psychologically powerful, since she is a tiny creature in a giant church (these scenes were filmed in Amiens Cathedral), surrounded by hostile men and menaced by the instruments of torture. Jeanne is a victim trapped in her bulky armor, forced to rely on merely natural strength.

Jeanne is alone. When we begin the film she is already an object of both protection and veneration among the women peasants; these women quickly disappear, and for the rest of the movie nobody but Jeanne and men will appear on screen.

With this new film, we have moved from a world where God might break in at any moment to one where prayer’s only answer is echo.

Nor is the loss of women’s community the only source of her isolation. “Joan” early on tells us that heavenly voices no longer guide her. In contrast to the first film, when she prays now, we hear not her own voice but the weary tones of an adult man. Later on, we will learn that this is simply the voice of every character’s prayer in the film. This is a strange choice, and therefore a welcome one, since it pushes us to reconsider the nature of Jeanne’s prayers. Why is the older, harrowed male voice of her inner longing so discordant with the girl we see on screen? Does this choice reflect Dumont’s own statement, “God alienates people from themselves”?

“Jeanette” often used its rural outdoor setting—the sheep-wandered fields, the towering sky—to show human weakness and incomprehension. But the cathedral scenes in “Joan” emphasize the characters’ littleness and loneliness more than any shot in “Jeanette”; now no voice comes, no help comes. Either showing Joan’s visions or showing her bereft of them would be powerful—after all, most of us are not guided by visions and have to make do with hope in the midst of a vast uncertainty. But with this new film, we have moved from a world where God might break in at any moment to one where prayer’s only answer is echo.

Joan of Arc has been a saint for 100 years. Her exploitation continues.
Mark Alpert

Even the decision to end the movie with Jeanne’s death isolates her. She is the only person on screen. She struggles alone, in the far distance, against the bonds that tie her to the stake. Smoke swirls and rises. And then blackness. “Joan” does not imagine its heroine’s afterlife on earth (the devotions, the miracles), let alone her life elsewhere.

It is hard to imagine that final black screen as a doorway opening onto something new. That isn’t exactly a criticism—I think this is more or less the film Dumont intended to make. He gives us a Maid of Orleans who is martyred, but uncrowned.

“Joan of Arc” can be rented for streaming at Film at Lincoln Center’s website.