The humiliation (and humility) of Hannah Gadsby 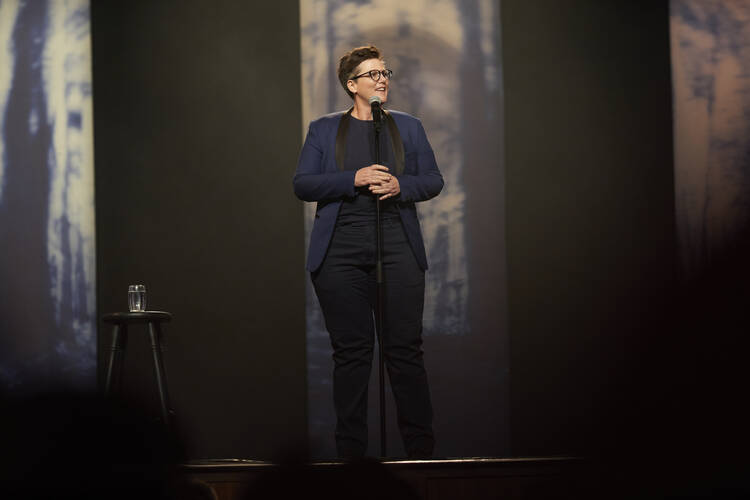 But after an overwhelmingly positive response to Gadsby’s Netflix stand-up special, “Nanette”— some called it “radical and transformative,” others “revolutionary”—she may not need to. Some critics are even saying “Nanette” will “go down as one of the greatest stand-up sets of our time.”

“It’s a bit much, isn’t it?” Gadsby told “The Tonight Show” host Jimmy Fallon last month, talking about the response. “It’s a quitting show; I thought I’d drop a bomb and leave. I really thought it would divide audiences, and it just hasn’t….The plans backfired.”

She opens her set talking about her childhood in the “Bible Belt” in the northwestern part of the Australian state of Tasmania, where homosexuality was outlawed until 1997.

“I loved growing up there. I felt right at home—but I had to leave as soon as I found out I was a little bit lesbian,” Gadsby jokes.

Satirical humor is mixed in with plenty of deeper moments, as Gadsby appeals to the crowd about the use of laughter as a way to release built-up tension. She reveals to the audience how she has experienced tension her whole life, feeling “incorrect” and “different” because of her sexuality.

Throughout her set, Gadsby talks about about growing up “a quiet soul.” She addresses her mother’s initial indifference to her sexuality and shares a harrowing story of being beaten up while waiting at a bus stop. She relives her trauma onstage in a powerful, raw moment of self-healing.

Gadsby’s own stories showcase the healing power of storytelling. She shares them not for audience laughs, but for her own empowerment. Viewers are riveted as she rediscovers herself and opens herself up.

Gadsby’s own stories showcase the healing power of storytelling. She shares them not for audience laughs, but for her own empowerment.

Lighthearted jokes take an emotional, realistic turn in the middle of her set when Gadsby talks about quitting comedy forever. “I built a career out of self-deprecating humor, and I don’t want to do that anymore,” she says, as the audience hushes. “Do you understand what self-deprecating means when it comes from somebody who already exists in the margins? It’s not humility. It’s humiliation.”

Gadsby, who studied art history, compares her experiences with the stories of Vincent Van Gogh, whose own art and struggles with mental health are often romanticized.

“Let’s make art great again, guys,” she says, taking a punchy jab at the #MeToo movement and pointing to controversial male artists from Pablo Picasso to Bill Cosby and film director Roman Polanski. Mocking “the patriarchy,” she brings up problems with misogyny and the obsession with maintaining men’s reputations in the “elitist” arts and entertainment world, as the women in the audience erupt into cheers.

“It’s not my place to be angry in a comedy stage,” she quips. “When I do it, I’m just a miserable lesbian ruining all the fun and the banter. When men do it, they are the heroes of free speech.”

Gadsby, who was raised without a religion, believes in hindsight and human resilience as a kind of superpower. “There is nothing stronger than a broken woman who has rebuilt herself,” she cries out.

In a recent interview with Build, Gadsby spoke about the struggles of female comics, who are always being compared with their male counterparts: “The difference between Louis C.K. and I is, we can both say we’re losers—when I say it, the world goes, ‘Yeah, you are a bit,’” she told host Lydia Polgreen. “And when Louis does it, they go, ‘You’re a genius.’ And that’s what pissed me off.”

With her appeal to emotion, Gadsby reminds audiences to see the vulnerable, resilient human being behind the humiliated stand-up comic.

At the end of her emotional comedy special, Gadsby is shown sitting at home surrounded by her dogs, a cup of tea in hand, a vase of fresh sunflowers on the table. Another day as Hannah Gadsby begins—and she is just getting started.

What a wonderful testimony to living the truth of who we are. It isn’t always easy, but it is the true call of Christ to be who God made us to be ... His unique word incarnate in each of us.

As a student, it’s not uncommon that you cannot find the monetary resources to get a prodigious assignment help in the UK. Although with the price packages offered by Essays Tigers, you have the opportunity to get expert writers to compose exceptional, strongly worded assignments. Furthermore, with our seasonal discount offers, you can save extra money!

I Have spent some time with this article. However, regardless of her “affiliation “ if you will I think the CHURCH should always be attuned to such an individual. The Church is all accepting as it ought and welcome her inclusion. We must all understand her plight. It’s a rough road to hoe. It’s upsetting that a person experiences such rejection and as Catholics we all must strive to accept because “it ain’t their fault.” And even then it’s not their issue. Not to be without feeling these persons should be respected.

I think the 'satisfaction with simplicity' is a thing of the past, if it ever existed. Consider the fact that Australians are building the biggest homes in the world! Essay Writing Service