Revisiting ‘Nothing Sacred’ : A show about gritty parish life we could use today 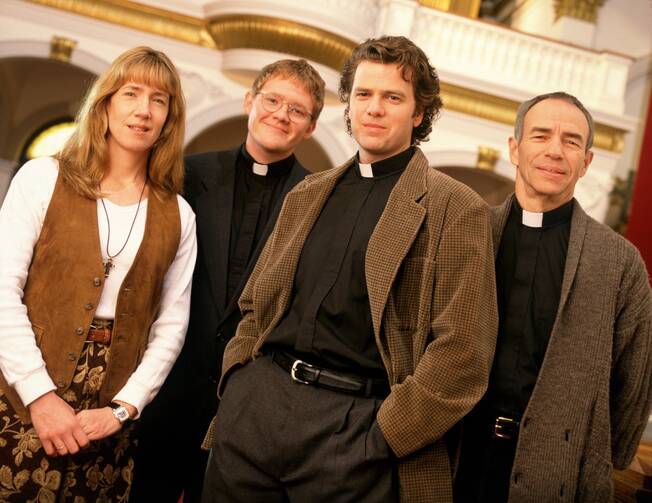 Members of the cast of ABC's 1997 show "Nothing Sacred." Photo: ABC

A priest—wracked with doubt, but lifted by faith—struggles to lead his urban parish. Decades-old abuse allegations surface against his beloved mentor. A woman religious longs to preach and celebrate Mass. A young priest is torn between tradition and a changing church. Locals bemoan the homeless who sleep on the church steps, waiting for the comfort of a meal at a soup kitchen and some time out of the cold. A pair of refugees flee immigration services by seeking shelter in the church. These stories would make for a great show in 2020; these stories already made for a great show in 1997.

“Nothing Sacred,” a series that ran for one season on ABC, was a gritty, generous vision of the daily life of an urban parish. Created by Bill Cain, a Jesuit priest who collaborated with longtime producer David Manson, the show was—and remains—groundbreaking.

The show was—and remains—groundbreaking. There has been nothing like it since.

I recently spoke with Father Cain about the show. He had just returned to New York City from Cape May, N.J., where he had gone for a reading of his play, “The Reds,” the story of lifeguards who experienced Hurricane Sandy in 2012. “We were showing people themselves,” Father Cain says of the reading, “and this is not a group that gets to see themselves very often.”

He might as well have been describing “Nothing Sacred”: priests and women religious, a parish secretary and an accountant, a director of religious education. Unless you read the fiction of J. F. Powers or Erin McGraw, you don’t often see these characters in stories, and you certainly don’t see them in television and film.

Father Cain treated these characters with respect because they deserve it. This was a world he understood, a world he inhabited. “When you watch the show,” says Father Cain, “you’re pretty much watching St. Francis Xavier [parish] on 16th Street” in New York City, where he lived for 20 years and where he regularly celebrated Mass. Manson, who had worked with Father Cain on other projects, said he wanted to pitch ABC a series. Father Cain offered three ideas, and Manson immediately jumped on the “urban parish idea.”

Father Cain treated these characters with respect because they deserve it

“We didn’t believe the network would make the pilot,” Father Cain says. “We didn’t believe they’d pick up the series.” Tough odds, but he is a deft writer with a graceful touch for sentiment. The cast included the celebrated stage actor Kevin Anderson as Father Ray, a priest who “tries his best” despite his own doubts; Ann Dowd—an Emmy award-winner for her performance in “The Handmaid’s Tale”—as Sister Maureen. Brad Sullivan played Father Leo, who was based on a “very traditional, but deeply humanist” Jesuit brother named Daniel Hoey, from Father Cain’s own parish. Bruce Altman plays Sidney, a Jewish accountant whose unbelief in dogma is contrasted with his devotion to the parish’s community mission; Tamara Mello is Rachel, a young church secretary who remains committed to the church despite her own struggles. And Scott Michael Campbell plays Father Eric, a new priest whose idealistic vision is tempered by the realities of church life.

Rolling Stone called “Nothing Sacred” the “best new show” of fall 1997. But the show had an enemy: the Catholic League, which began boycotting the series even before the first episode aired. The boycott managed to rattle ABC. Episodes deemed controversial were changed around, and some were ultimately never aired.

It was a misguided protest. “Nothing Sacred” was a well-written, engaging show about church life that aired on primetime network television. It juxtaposed the theological subtleties of Catholic faith with the literal needs of a parish staff. “Nothing Sacred” should have been embraced as a necessary representation of people of faith—the people who “don’t get to see themselves reflected that often.” Here was a profoundly Catholic show that laid bare the fault lines of the church while capturing the beauty of belief. It should have been celebrated.

Even its vilification was inaccurate. Father Leo was the show’s moral center. No matter the provocative storyline or searing conflict, Father Cain says, “we almost always landed firmly in a deep place of the tradition.” He thinks that “one thing that made the show distinctive” is that most episodes “ended with a ritual, whether it was a sacrament or a sacrament-like” event. Among cast and crew, both Catholic and not, he said, they felt “deep in the spirit of prayer.” After all, “when you do a ritual, suddenly you are invoking God.”

No matter the provocative storyline “we almost always landed firmly in a deep place of the tradition.”

The boycott derailed an essential episode that was originally meant to appear early in the series. The second episode was dedicated to a friend of Father Cain, a priest who died of AIDS. “We wrote it, and then we filmed it, and then ABC said they wouldn’t show it,” he says. That is a shame; it is an episode worth celebrating.

Early in the episode, we see a photo of Ray with his seminary class, with Xs drawn through some of their faces, marking those who had left the priesthood. In “Nothing Sacred,” being a priest is a tough but essential job. Father Ray tells that to Father Jesse, a friend who hasn’t been celebrating Mass at his own parish. Jesse has good reason: He has AIDS and is struggling with both illness and a feeling that he is unworthy. Father Cain writes snappy, dark, self-deprecating humor in the exchanges between Ray and Jesse, a powerful contrast with Jesse’s honesty toward the end of the episode, when he admits to a number of priests that he is gay.

"If you get back to basics, if the building goes away, if all of the other things go away, what do you finally have?”

In the final scene, Ray and Jesse sit together, knowing the end is near. Ray compares Jesse to Christ, a man who also knew he was going to die; how Jesus took bread, broke it and gave it to his friends and said—and here Jesse answers— “Remember me.” His voice’s hesitancy places his words somewhere between a statement and a question.

What a dramatic, powerful, Catholic scene. And the audience never saw it.

“Nothing Sacred” took real risks, but that is because Catholicism, in its most visceral, public form, is a radical affirmation of love, service and Christ. In the episode “Hodie Christus Natus Est,” Father Eric wants to celebrate an ordinary Midnight Mass, but his plan is upended when a refugee family from El Salvador seeks sanctuary in the church. One of the refugees tells the story of the El Mozote massacre, which Father Cain admits is “quite a thing to get on television.” The episode ends with three celebrations of Christmas. The priests break bread in jail after tussling with police and immigration officials; the refugees gather in the back of a restaurant, “having a eucharistic meal”; and then Sister Mo leads a prayer service at the church.

Father Cain's goal as a writer is “to show people the greatness that is hidden from them.”

Perhaps the episode closest to Father Cain’s heart is “Felix Culpa.” “We were told that we were being cancelled,” he says. “I was as tired as I could be, and we really wanted to say what the church is…. The idea being, if you get back to basics, if the building goes away, if all of the other things go away, what do you finally have?”

The church is set aflame by Father Eric’s faulty preparation for the Easter service (he uses too much lighter fluid when setting up the vigil fire) and nearly burns down. Haunted by his mistake, he can’t bring himself to give the homily at Easter Mass until Father Ray consoles him. “It’s hard being alive,” Father Eric finally begins the homily. “Believing enough, just to keep living.” He wonders if Jesus was happiest when he was dead, when he thought his suffering had ended. “God put his mouth to his son’s ear and said, ‘No. I choose you. My son, my beloved. Wake up. Come to me. I’m not done loving you yet.’” Father Cain tells me his goal as a writer is “to show people the greatness that is hidden from them.” That spirit sustains every episode of the series.

“Nothing Sacred” deserves a wider audience. (All episodes can be found on YouTube.) The series masterfully captures the melancholy and joy of parish life and shows the church is strong and elastic enough to survive its tensions. Here is the rare television series that shows there is room and hope enough for all of us.

Correction Feb 26: Due to an editing error, an earlier version of this article stated Annie Dowd won two Emmy's for her performance in The Handmaid's Tale.

Nick Ripatrazone has written for Rolling Stone, The Atlantic, The Paris Review and Esquire. His upcoming  book is Longing for an Absent God: Faith and Doubt in Great American Fiction (Fortress Press).

@nickripatrazone
Show Comments ()
Join the conversation: Login or create an account
Before you can comment, you need to update your profile to include your first and last name, as required in our comments policy. Then reload this page and you'll be set up for commenting. Update your profile
Show Comments ()
Comments are automatically closed two weeks after an article's initial publication. See our comments policy for more.