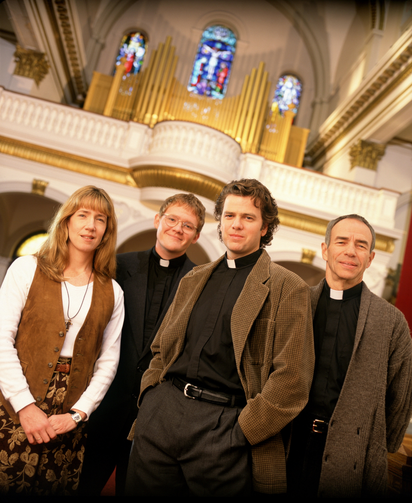 ABC's "Nothing Sacred," a show about life in an urban parish, ran for one season in 1997. Photo: ABC

This was originally published in the Sept. 13, 1997 issue of America.

DOUBTLESS you will be hearing a lot this month (and the next, and maybe the next) about a new television series centering around the life of priests, sisters and parishioners in a Catholic parish. Doubtless you will hear some voices protesting against supposed "anti-Catholicism." Doubtless, too, you will find the media nearly incapable of dealing with a show that treats priests, sisters and Catholics as intelligent, caring and human.

The show is Nothing Sacred (ABC, Thursdays, 8 P.M. ET), and if you let those voices and critiques prevent you from watching the show, you will have done yourself a signal disservice. For, judging by the pilot episode, "Nothing Sacred" looks like the best television series ever produced about the rich and often complicated lives of American Catholics.

Doubtless, you will find the media nearly incapable of dealing with a show that treats priests, sisters and Catholics as intelligent, caring and human.

In fact, it may take a few minutes of watching simply to get past the surprise that here is a show dealing with American Catholicism in an intelligent, adult manner. The pilot, for example, opens as the 40-ish Father F. X. ("Ray") Reynaux climbs groggily out of bed, staggers into the bathroom, performs his morning ablutions, slips on an alb and then slides into his church for morning Mass. His early-morning efforts are all for a congregation of precisely one parishioner—another rectory-dweller, Father Leo.

But declining Mass attendance is only one of Father Ray's problems. He has a grammar school of unruly children to oversee, a soup kitchen that's facing both financial difficulties and protests from the "yuppie scum" residents invading his urban neighborhood (they object to poor people loitering around the church), a young (and, we suspect, conservative) curate who's uncertain if parish life is for him, and for good measure, a waspishly intelligent woman religious (Sister Maureen) whose bête noire is sexist language in the liturgy. Provocative? Yes. Anti-Catholic? Well, if you think that any of these story-lines are beyond the pale, just recall one of your parish council's agendas or, better yet, check out some recent issues of AMERICA.

"Are you a good priest?" someone asks Father Ray in the pilot. "Depends who you ask," comes the response.

One of the most heartening aspects of this show is the portrayal of Father Ray, beautifully acted by Kevin Anderson (late of "Sleeping With the Enemy"). In his hands, Father Ray is a caring pastor, as well as a person with very human hopes and dreams and some very real flaws. "Are you a good priest?" someone asks him in the pilot. "Depends who you ask," comes the response. Besides celebrating Mass daily, he struggles to make financial ends meet for the parish, struggles to keep the rectory at peace, struggles when he finds out that someone is taping his responses in the confessional, struggles with the chancery and struggles with some painful personal problems. And in the pilot it appears that, in the midst of it all, he is facing a sort of vocation crisis. His belief in God seems to be slipping away (at least temporarily), a situation he tries desperately to stave off through repeated readings of St. Thomas Aquinas's five proofs for the existence of God. (Good luck, I wanted to say.)

More pressing are the challenges he faces living out his promise of celibacy. He takes his vow seriously, yet finds himself attracted to a former flame. (If you think raising that question is outlandish or somehow "anti-Catholic," just consult your nearest celibate.) But in all of these struggles, Father Ray comes across as both a decent person and a committed priest.

In all of his struggles, Father Ray comes across as both a decent person and a committed priest.

THE SHOW is obviously written by someone in the know, Catholic-wise. Incense and the rest are referred to by their proper Catholic slang ("smells and bells") and Father Eric, the young priest, complains of being a "sacramental vending machine." The writers are also intimately familiar with the spiritual life. When Father Eric, on retreat at a nearby monastery, tells the vocation director that he sincerely wants to be a monk, he is quite correctly asked, "But is that what God wants?" Eric walks through the aisles of the abbey church praying earnestly, "Please God, want this for me!"

Perhaps most astonishing of all, the sacraments are presented very effectively. There are, quite naturally, plenty of Masses. Funerals, too, which Father Ray says he prefers to weddings. "At least they stay dead," he says wryly. Of course, there are a few theological and canonical no-no's. Father Ray, for example, counsels a woman who is considering an abortion to follow her conscience (that's O.K.) but fails to inform her about the church's teaching on the issue (that's not). And in a rough cut of the pilot, a child is baptized without mention of the Father, Son and Holy Spirit (oops!). But for the most part there's a solid overview of the sacramental mysteries that lie at the heart of the life of a parish.

The show features the best portrayal of the sacrament of the sick I've ever seen—on television or in the movies.

In fact, sandwiched between Father Ray's celibacy problems and the soup kitchen meetings, comes the best portrayal of the sacrament of the sick I've ever seen—on television or in the movies. When people are anointed on TV, they're usually already dead—which misses the point about the healing effect of the sacrament. In a scene in "Nothing Sacred," though, a young boy who has attempted suicide is visited by Father Ray in the hospital. As the boy struggles against the restraints holding him in his bed, the priest takes out a vial of holy oil, leans over the boy, whispers a (theologically correct) description of the sacrament and anoints him. The boy becomes calm instantly. It's a lovely moment.

The writer of the series has told me that there will be some "provocative" dramas later in the season. Doubtless you'll hear voices raised in protest that there are too many problems being focused on and not enough positive things. But it's a drama, after all, and conflict and controversy are inherent to the genre. (Besides, viewers usually avoid completely positive treatments of a single topic—also known as commercials.)

ANY OTHER PROBLEMS with the show? Sure. It's a television drama after all, a sort of "Hill Street Blues" meets "The Mission," so there's bound to be a bit of confusion as viewers follow one story line to another. One also wonders what non-Catholics will make of all the talk about sacraments, liturgies, retreats and the like. (It can be pretty arcane talk, admit it.) But no matter; we didn't know what intubation was until "E.R." came along. And the "Carmina Bur- ana" music from "The Exorcist" played during a school soccer match? I half expected Linda Blair to be the goalie.

But these are minor cavils. "Nothing Sacred" is an effective drama about Catholicism in the United States penned by sensitive writers and acted by a marvelous cast.

Show Comments ()
Comments are automatically closed two weeks after an article's initial publication. See our comments policy for more.
Provide feedback on this article
Join the conversation: Login or create an account
Before you can comment, you need to update your profile to include your first and last name, as required in our comments policy. Then reload this page and you'll be set up for commenting. Update your profile
Advertisement
More: TV / Catholic Identity