Finding God in the mundane, in Polish television 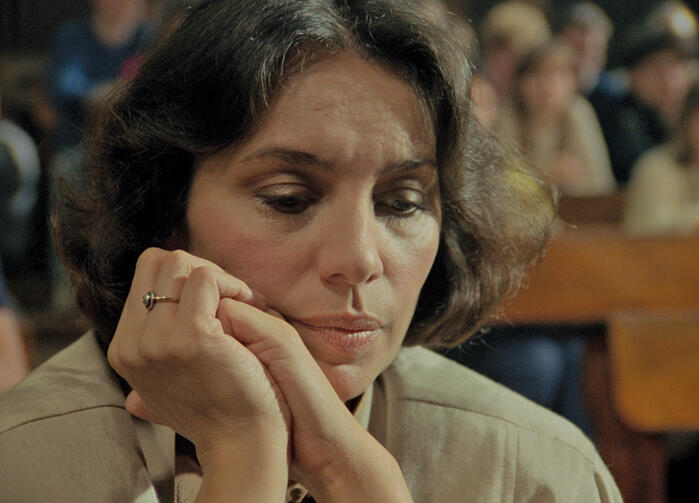 A Polish television crew is interviewing the head of a Warsaw elementary school, who boasts that yes, his children get free milk each day at recess.

But the milk is bad, the interviewer tells him: The students pour it down the toilet.

“Oh no,” he says. “We always lock the restrooms at recess.”

Krzysztof Kieslowski was hardly a comedian, but there was always a vein of black wit running through the late Polish filmmaker’s work, which included the acclaimed “Three Colors” trilogy—“Blue” (1993), “White” (1994) and “Red” (1994)—as well as “The Double Life of Veronique” (1991) and earlier works like “Blind Chance” and “Camera Buff” and the documentaries that established his career. The absurdities of life seemed to tickle him, even the absurdities of life under a Soviet-era regime. Given that he was regarded as a giant of cinema, he probably found some humor in the fact that his best work was made for television.

Dekalog, produced for Polish television in 1989 and 1990, was originally planned to be the work of 10 different directors, but Kieslowski did it all himself. (Well, sort of: The script is by the director and his longtime writing partner, Krzysztof Piesiewicz, who is now a member of the Polish Parliament; and the music is by Kieslowski’s regular composer, Zbigniew Preisner.) We live in an age of superbly executed television, thanks to an explosion of venues, a subscription-based business model and standards of so-called decency that are much looser but sometimes lead to more sophisticated entertainment. Kieslowski had none of that, plus Communism. Yet, it is hard to say that anything on the small screen has surpassed “Dekalog” since it first aired in 1989.

The good news for fans, and fans to be, is that Janus Films, marking the 20th year since Kieslowski’s death, will begin a national theatrical tour of the newly restored “Dekalog” on Sept. 2 in New York, followed by Los Angeles and 20 more cities. This tour will be followed by the release of the film by the Criterion Collection on Blu-ray/DVD on Sept. 27.

Each of the 10 episodes in “Dekalog” is based on one of the Ten Commandments; the fifth and sixth episodes were expanded and released theatrically as “A Short Film About Killing” and “A Short Film About Love,” respectively. In his adaptation of the Ten Commandments, Kieslowski, setting his stories in what was then contemporary Warsaw, and posing his parables against a gray apartment block and its inhabitants, took the distant, austere majesty of the Old Testament dictates and made them not just real but homely; not just immediate but intellectually disturbing. “Dekalog,” like much great art, makes audiences look at things differently, even God and God’s word.

Episode One tells the story of a beautiful boy of 12 named Paweł (Wojciech Klata) and his father Krzysztof (Henryk Baranowski), a university professor of linguistics. The whereabouts of the boy’s mother are unknown, though she seems to be far away (the boy has programmed their antediluvial P.C. to track her time zone). Paweł is cared for at times by his father’s sister, Irena (Maja Komorowska), who is as devout as her brother is not. The boy begins to ask existential questions, and his father tries to answer them rationally, substituting science for what the boy really yearns for, spiritual nourishment.

There is a beautiful scene in which Krzysztof and Paweł compete in a chess tournament in which a female grandmaster is engaged in a dozen matches at once; that they win their match is a result of both logic and trust (in each other). But when Paweł wants to try out his new ice skates and Krzysztof concludes that the ice is sound—because every measurement tells him so—his trust in facts, and lack of faith, is tested.

In Episode Two, Dorota Geller (Krystyna Janda) is a concert violinist who loves her seriously ill husband, Andrzej Geller (Olgierd Łukaszewicz), but is pregnant by a fellow musician whom she also loves. Dorota wants her husband’s doctor, played by Aleksander Bardini, to swear to a prognosis: If her husband is to die, she will not abort the baby. The doctor, a believer, swears to God. But gets it wrong.

Episode Two is particularly unsettling: Who is the sinner and where is the sin? For that matter, what is the relationship of the story to a corresponding commandment? Kieslowski admitted those connections were not always simple or direct. But the doctor certainly presumes, in swearing to God, about a fate God himself has yet to determine. The doctor has taken the Lord’s name in vain but with a twist worthy of O. Henry. In Episode One, the father’s “worship” of computers and technology substitutes for a reverence for God. In Episode Three, it is a mix of sins—a woman dupes her ex-lover into spending Christmas Eve with her, away from his wife and family, thus venturing into a kind of twofold violation—of the Sabbath, so to speak, and adultery.

Kieslowski used different cinematographers for each episode (except for Piotr Sobociński, who shot Episodes Three and Nine), and the look is a dour view of Warsaw and, by extension, human nature. At the same time, the visual asides provide poetic commentary on the narrative, and the camera is always alive and probing. The acting is superb, the cast largely a now-anonymous group of Polish performers who walk through each other’s episodes with the flair for comic coincidence that exercises the intellect and would later materialize in the mostly French-language “Three Colors” films (they were, in fact, French).

“These films dramatize their ideas with such dazzling skill,” Stanley Kubrick said of “Dekalog,” “that you never see the ideas coming and don't realize until much later how profoundly they have reached your heart.” Or your mind. Most of us have probably lived all our lives with an idea of the Ten Commandments that was, excuse us, etched in stone. Kieslowski was raised Roman Catholic and professed to those who interviewed him (including this writer) a “personal and private” relationship to God. The question of God always came up because his films both questioned belief and affirmed it. In “Dekalog,” he used the Ten Commandments to create tantalizing intellectual exercises that bordered on philosophical acrobatics. But the results were also prayers of thanks, for being able to find God in the often irrational details.