Review: In ‘The Traitor,’ the truth may not set you free 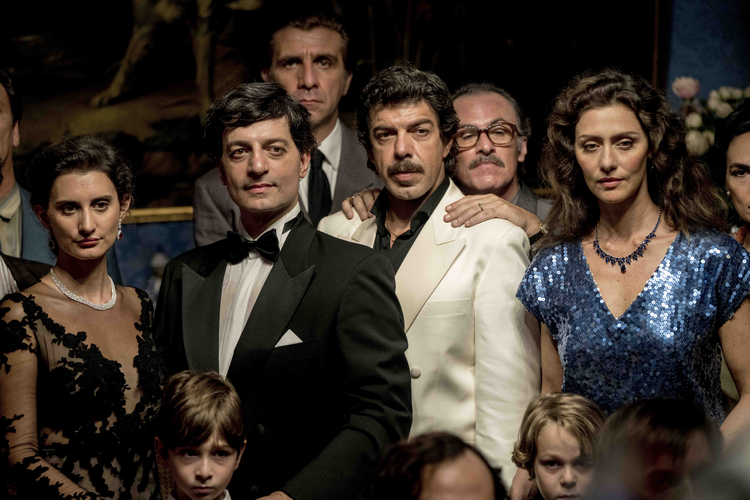 For nearly six years, from 1986 to 1992, the Sicilian capital of Palermo hosted a marathon trial of the Mafia, which concluded in the conviction of 338 members of La Cosa Nostra. Nineteen men received ergastolo, a life sentence. The largest trial in Mafia history, held in the aftermath of brutal slayings committed by the Corleonesi (a faction within the Corleone family of the Sicilian Mafia) in the early 1980s, it made informants (or “rats”) out of mafiosi and dealt a severe blow to organized crime in the region.

In his extensive collaboration with magistrate Giovanni Falcone, whose years of anti-Mafia efforts led to his assassination in 1992, the mobster-turned-pentito Tommaso Buscetta emerged as a star witness for the prosecution and a reviled figure among his former collaborators. Buscetta’s confessions led to the imprisonment of major Mafia players, including godfathers Michele “the Pope” Greco and Salvatore “the Beast” Riina.

Buscetta, with his thick mop of black hair and penchant for wearing sunglasses in the courtroom, is the titular turncoat in the new Italian-language film, “The Traitor” (“Il Traditore”). Director Marco Bellochio, an elder statesman of Italian cinema whose disturbing debut picture, “Fists in the Pocket,” stunned audiences in 1965, returns with an uncompromising look at the violence and cold cruelty of Mafia life.

Director Marco Bellochio, an elder statesman of Italian cinema, returns with an uncompromising look at the violence and cold cruelty of Mafia life.

In its flashy opening sequence and its frank depiction of on-screen violence (two young men are strangled, another is shot at point-blank range after his right arm is amputated), “The Traitor” appears to draw more inspiration from the gangsters of Brian De Palma’s “Scarface” than the romanticized, refined killers of Francis Ford Coppola’s “The Godfather.” Pierfrancesco Favino is brilliant as Buscetta, a man angered and bereaved by the murder of family members and friends.

Though his criticism of the Mafia and willingness to break the code of silence is unprecedented, Favino’s Buscetta has a complex relationship with the truth, specifically in regard to his drug trafficking conviction and connection to the 1963 Ciaculli massacre, in which a car bomb killed seven police and military officers. While Buscetta’s revolt against the Mafia is noble, even if performed in private to Falcone (Fausto Russo Alesi) and then under maximum security in the Ucciardone prison, where the trial occurred, both Favino and Bellochio resist the urge to canonize Buscetta.

As a lawyer in the film observes, Buscetta is a defendant in a court case, “not Padre Pio of Pietrelcina.”

Wrapped up in the moral questions the film poses is the relationship of organized crime to religion, specifically Roman Catholicism. Palermo, where Buscetta was born into poverty in 1928, is a Catholic city known for its Festino—an annual celebration of its patroness, Saint Rosalia. Redemption is a tricky subject in the film. While Buscetta publicly confesses wrongdoing and turns against his former life, unlike the tight-lipped character of Frank Sheeran in Martin Scorsese’s “The Irishman,” redemption does not come easy, if at all. There is no confession to a cardinal, à la “The Godfather Part III,” in this film.

After a woman, betrayed by Buscetta’s revelations, expresses her rage at a group of journalists gathered outside her door, a reporter asks her, “Ma’am, don’t you believe in Christian forgiveness?” The woman replies: “Yes, but first he has to kill himself and then I’ll forgive him.”

Even after Buscetta and his family move to Salem, N.H.—and then Fort Collins, Colo. and finally Miami, Fla., as part of the Witness Protection Program—he continues to discuss murdering two Mafia rivals with fellow trial informant Salvatore Contorno (Luigi Lo Cascio). As the aging Michael Corleone (Al Pacino), in “The Godfather Part III,” asks the fictional Cardinal Lamberto, “What is the point of confessing if I don’t repent?”

While Buscetta publicly confesses wrongdoing and turns against his former life, redemption does not come easy, if at all.

The film, which runs nearly two-and-a-half hours, interperses footage of the characters’ real-life counterparts at different moments, lending it a quasi-documentary feel. While the first part of the film, with its sudden outbursts of violence, feels uneven at times, “The Traitor” succeeds as a riveting courtroom drama in its latter half.

These loud, frenzied scenes showcase Favino’s talent for delivering fast-paced, cutting dialogue with a cool, almost detached exterior. His extended argument with Giuseppe “Pippo” Calò (Fabrizio Ferracane), a longtime associate who denies knowing Buscetta, is fraught with the threat of violent retribution. The obscene antics of the prisoners and exasperated calls to order of Presiding Judge Alfonso Giordano (an excellent, emphatic Bruno Cariello) make for some dark comic relief.

As did Martin Scorsese in “The Irishman,” Marco Bellochio poses challenging questions about guilt and the nature of truth in “The Traitor,” a film which does much to remove the glossy veneer of organized crime. But this is still a movie about the Mafia, a subject of enduring and morbid fascination, despite the costs, for American audiences.