Review: ‘Waves’ raises questions about storytelling in the black community 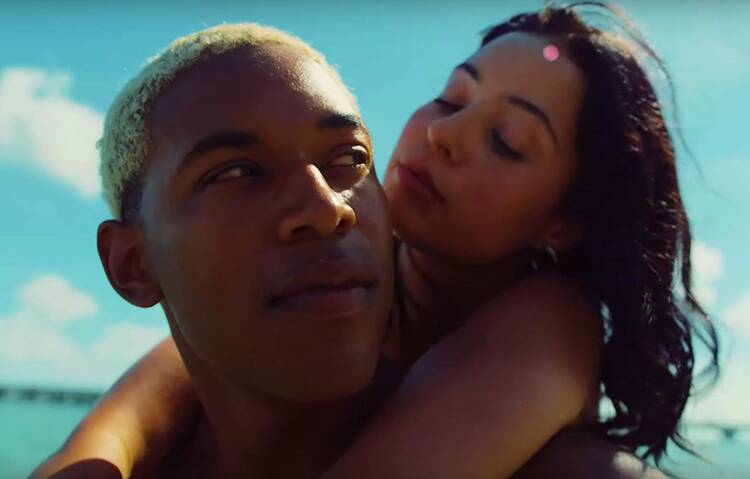 When waves roll in and crash down on the shore, they shatter before slowly receding back out into the seascape, only to return in a cyclical phenomenon. A new film written and directed by Trey Edward Shults, “Waves” follows this same trajectory; it is a family story told in two parts, divided directly down the middle with one major crash.

Tyler (Kelvin Harrison Jr.) is the oldest son of an upper middle class nuclear family in South Florida. He is popular in school, drives a pickup truck and has a gorgeous girlfriend (Alexa Demie, a breakout star from HBO’s “Euphoria”). A fierce competitor on the wrestling mat, Tyler works his way toward a college scholarship. He is weighed down by the pressures of masculinity, reminded by his father, Ronald (Sterling K. Brown), that as a black boy in America he has to work twice as hard as his peers. There is no room for error.

As hiccups happen and errors invariably occur, we see Tyler’s identity unwind. Shults arouses anxiety through speeding cars on freeways, animated dialogue and earnest performances. The tension is fine tuned like a thriller.

“Waves” is a family story told in two parts, divided directly down the middle with one major crash.

When the pressure does release, we are surprised by how early on in the film a climax is reached. For the second half of the film, our gaze shifts towards Tyler’s younger sister, Emily (Taylor Russell). The change in perspective allows us to see how a family responds to a violent, traumatic incident.

The second act is slower and disjointed in tone from the first. Reeling from the aftershocks of the climax, viewers might find this shift unsettling, but with a slower pace Shults creates an environment for us to reflect on the themes explored in his film. Emily works her way through a shattered world, wading through guilt, in search of grace, mercy and dignity. She finds unexpected love with her classmate, Luke (Lucas Hedges).

The soundtrack helps get us there. As Emily and her new boyfriend drive through South Florida, they listen to and discuss tracks like Dinah Washington’s “What a Difference a Day Makes” and Chance the Rapper’s gospel-infused “How Great.” They are vulnerable with each other, discussing loss, tragedy, family, grief and belief. The deteriorated family unit finds a way to slowly restore itself through Emily’s catharsis in the second half of this cinematic diptych.

Plot holes are forgivable, as nearly every movie has them, but these plot holes were married with production missteps.

The film is not without its faults. Numerous times while watching I caught myself asking questions to the point of distraction. How could Tyler’s parents be so ignorant? Why wouldn’t he be accompanied to an MRI? In 2018, wouldn’t you be more suspicious of your teenage son after noticing some of your painkillers were missing? Plot holes are forgivable, as nearly every movie has them, but these plot holes were married with production missteps.

In scene after scene dark-skinned actors are poorly lit, literally casting a shadow on their performances. Often backlit and silhouetted, their faces become hard to read projected in a dark theater. For all of the film’s bold cinematic choices (a brilliant color palette, lens flares and aspect ratio changes) Shults and cinematographer Drew Daniels fail at the most basic level of filming their subjects properly.

Diversity on screen is cheap without diversity at every level behind the scenes. I am left wondering if a black director or cinematographer would have more adequately captured these black actors on camera.

I wonder: can white filmmakers tell black stories? Should they?

It is hard to resist comparing “Waves” with “Moonlight,” another A24 film telling a black story set in South Florida. In “Moonlight” director Barry Jenkins tells the story of Chiron, a young, gay black man growing up in Miami. Throughout the intense character study we can see Chiron’s face. With proper lighting, there are fewer shadows that obscure our vision and distract from the performance. In Jenkin’s follow up “If Beale Street Could Talk” black flesh sparkles in light, glowing on film. The work done behind the scenes, in pre- and postproduction, creates a film in which black performances can shine and black stories are uplifted.

The technical failure in “Waves” opens up questions about storytelling and what it means for a white man to have written this story about a black family. What nuances about black family life may have been missed in that process? Could source material from a more specific perspective have led to even more authentic performances? In a world after the tragic deaths of Trayvon Martin and Michael Brown, after the controversy surrounding recent Best Picture winner “Green Book,” are we called to hold filmmakers up to a higher standard?

These questions gnaw at me as I process what is unquestionably a strong film with a moving story, dynamic themes, complex characters and powerful performances. My understanding of the film moves in and out, crashing each time like a wave on the shore as I wonder: can white filmmakers tell black stories? Should they?

Ciaran Freeman is a former O’Hare Fellow at America Media.