Broadway’s love affair with the mixtape 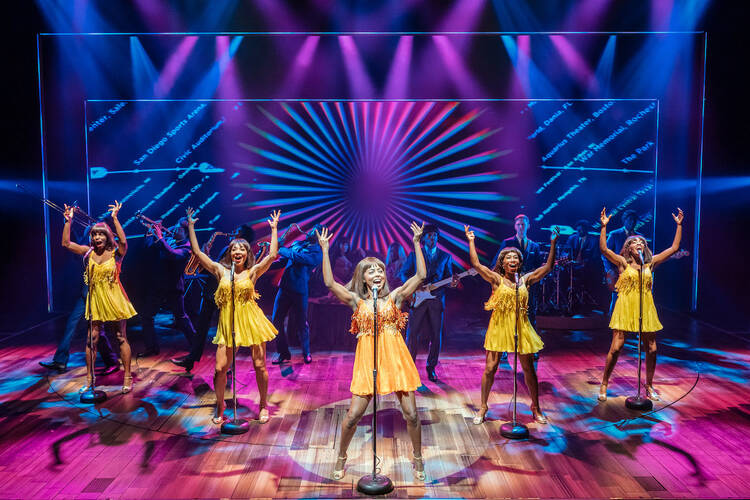 Adrienne Warren and the cast of “Tina” (photo: Manuel Harlan)

The sound of the Broadway musical has changed irrevocably in the half century since the showtunes of Rodgers and Hammerstein, and heirs such as Sondheim or Kander and Ebb, ruled the stage. But the sound is not all that has changed: Along with its embrace of rock, pop and hip-hop, the substance and shape of the American musical have been transformed. While the traditional narrative musical is not extinct—“Hamilton,” for instance, is more a culmination than a reinvention of the form—many shows that make it to Broadway these days are harder to classify. From “jukebox” musicals cashing in on yesterday’s hits to concept shows built around larger-than-life personalities or mythic narratives, what we mean when we say “musical” now often demands a further definition.

The fall season has given us three wildly different case studies in Broadway’s pop/rock hybrids, with all three representing new twists on longstanding trends. “American Utopia” is a glorified, and glorious, concert by David Byrne, the former frontman of the Talking Heads; “Tina: The Tina Turner Musical” combines the singer’s biography with a flashy greatest-hits compilation; and “Jagged Little Pill” grafts a contemporary story onto Alanis Morissette’s 1995 blockbuster album. All three shows are likely hits and awards magnets, though whether they are form-defining watersheds remains to be seen (and heard).

The fall season has given us three wildly different case studies in Broadway’s pop/rock hybrids.

Byrne has dipped his toes into theater before, most notably with his immersive Imelda Marcos musical “Here Lies Love,” a hit Off-Broadway. But “American Utopia” makes no pretense of narrative; instead it is a beautifully curated sampler of songs from both his Talking Heads and solo careers, with an emphasis on his more big-hearted, outward-looking material, as opposed to his more clipped, paranoid rants—more “This Must Be the Place” than “Psycho Killer.”

Appearing in a gray suit and bare feet, with an 11-member band similarly attired and roving the stage like a futuristic marching band, Byrne peppers the evening with slyly searching commentary about science, humanity and music, coming off a bit like Andy Warhol doing a TED talk as Mister Rogers. A spry 67, Byrne is in excellent voice, whether stretching it over big beats and sinuous guitars or joining his ensemble in gorgeous choral arrangements. Indeed, I don’t think I have ever heard a better-sounding show in any venue (the show is at the Hudson Theater in New York through Feb. 16).

David Byrne is in excellent voice in ‘American Utopia,’ whether stretching it over big beats or joining his ensemble in gorgeous choral arrangements.

“Tina” also has a big, brassy sound befitting its star, though in place of its actual subject (now 80 and living in Switzerland), Broadway is gifted with a powerhouse named Adrienne Warren, who plays Turner from her teenage years in 1950s-era Tennessee to her ascendance as a global pop phenomenon in the 1980s. Between those two points is the backstage drama made widely familiar by the film “What’s Love Got to Do With It”: her personal and professional partnership with band leader Ike Turner, who gave young Anna Mae Bullock her stage name and years of relentless abuse until she finally went her own way. Katori Hall, the show’s book writer, gives this material more than its melodramatic due, but the show is at its best when Warren is allowed to simply hold the stage, with the barest encumbrance of story, and enact her eerie, tireless channeling of Turner’s vivacious voice and presence. The director Phyllida Lloyd wisely gives Warren plenty of chances to do so, including with an embarrassment-of-riches encore that makes “Tina” the apotheosis of Broadway-as-Vegas-floor-show. If that’s your jam, “Tina” is the show for you.

“Tina” has a big, brassy sound befitting its star.

I am less sure which audience “Jagged Little Pill” is supposed to be for. Fans of Morissette’s record, mostly Generation Xers and millenials, may or may not relate to Diablo Cody’s somewhat generic original story about a well-off Connecticut family. It is narrated largely from the point of view of its perfectionist white mom, Mary Jane (Elizabeth Stanley), who is in denial about a host of problems, from an escalating addiction to opioids to her inability to relate to her adopted black daughter, Frankie (Celia Rose Gooding). Cody and director Diane Paulus deftly link the angsty dilemmas delineated by Morissette’s songs to both the show’s restless teen characters and its adrift adults. And there is an endearingly earnest guilelessness to some of the self-expression on display here. I can think of no Broadway writer, and few rock lyricists, who would come up with the lines, from the song “So Unsexy”: “Oh, these little rejections, how they add up quickly/ One small sideways look and I feel so ungood.”

I am less sure which audience “Jagged Little Pill” is supposed to be for.

The downside of such directness, though, is that it can shade into obviousness, even preachiness. The show’s activist teens, when they are not writhing to Sidi Larbi Cherkaoui’s splashy choreography, are often waving handmade placards in protest. Many of the show’s characters are so broadly drawn that they often feel like placards themselves. What life they have comes from the performers, in particular the heartbreaking Stanley, and Lauren Patten, as Frankie’s jilted young lover, Jo, who gets to deliver Morissette’s fierce breakup rant, “You Oughta Know.”

You could argue that the jolts of musical energy these shows provide are a kind of borrowed currency. Apart from a few fine new songs Morissette wrote expressly for her show, everything in these three new musicals was written and recorded, and in many cases widely cherished by fans, before it reached Broadway. But if their scores are not strictly original, these are all clearly original musicals of a sort—many intriguing sorts, in fact. For better or worse, today’s Broadway is more mixtape than magnum opus.