An epic new Broadway play on modern gay life asks: can we love ourselves? 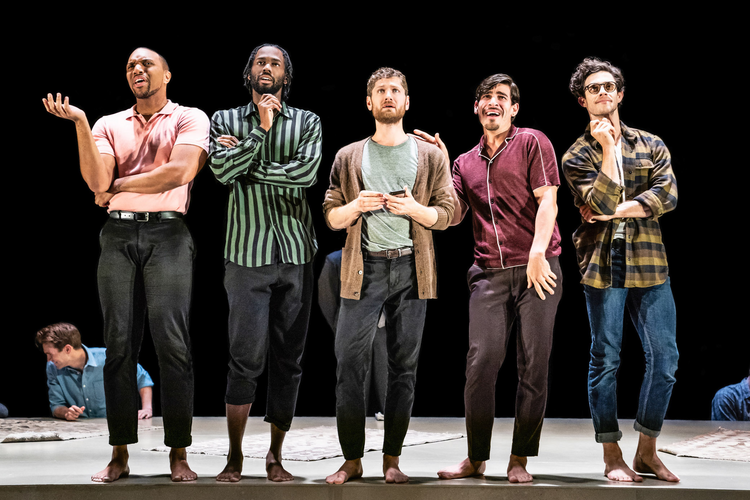 The central theme of plays about contemporary gay life—a literature that can be traced back half a century to 1968’s “The Boys in the Band”—has not been the trauma of coming out, the struggle for civil rights or the fight against H.I.V./AIDS. Threaded through that subject matter has been the urgent question of whether we can learn to love one another in spite of the way we too often treat each other and relatedly, whether we can love ourselves. This quandary is obviously as relevant to straight audiences as to gay ones, and it finds eloquent if over-indulgent new expression in “The Inheritance,” an epic two-part play now on Broadway.

On its most basic level, Matthew Lopez’s play is a portrait of millennial gay male life in New York City, and it is a picture both celebratory and cautionary. Some young men are happily settling down into marriage and child-rearing, while others chase careers and partners with roughly equal abandon. Poised on the cusp of these alternatives is the show’s central couple, sweet and soulful Eric (Kyle Soller) and high-flying Toby (Andrew Burnap). The former is a bookish culture vulture and natural host who works for a nameless nonprofit; the latter is a self-involved social butterfly whose relationship to literature centers chiefly on his own novel, which he is turning into a play.

Matthew Lopez’s play is a portrait of millennial gay male life in New York City, and it is a picture both celebratory and cautionary.

What binds them is the usual tangle of affinity and mutual need, as well as an impossibly posh Upper West Side apartment, which Eric has inherited thanks to rent control. What begins to tear them apart are outside sexual temptations, yes, but also a divergence in worldviews and ambitions: Eric is looking for a home, for roots, for meaning, while Toby is running from a squalid past toward an ostensibly glittering future.

Layered under and around this rather simple breakup melodrama, which would hardly justify the play’s almost-seven-hour running time, is an elegiac multi-generational saga that owes an open debt to E. M. Forster’s classic novel Howards End. Eric befriends Walter (Paul Hilton), a quiet, middle-aged gay man with matter-of-factly harrowing tales of the closet and the early plague years of AIDS. Meanwhile, Toby gets involved, in succession, with a pair of rootless young men, one rich and one poor (both played by Samuel H. Levine).

What begins to tear them apart are outside sexual temptations, yes, but also a divergence in worldviews and ambitions.

These stories track, with intriguing variation, the main plotlines of Forster’s novel, in which a pair of over-educated sisters become variously entwined with the landed gentry on the one hand and the working poor on the other, leading to an inevitably cataclysmic, cathartic clash. The unfolding of these disparate strands is handled deftly and staged fleetly by the director Stephen Daldry in a production that is unerringly theatrical and often blazingly clear-eyed.

Most stunningly moving is what Lopez has done with the house of Forster’s title. In the book, the country estate of Howards End is a site of contention over nothing less than the patrimony of England itself, with Forster clearly on the side of the workers, not the owners. In “The Inheritance,” the house is the upstate retreat of Walter and his longtime partner, Henry Wilcox (John Benjamin Hickey), a brisk real estate billionaire. It is the place where they first claimed a measure of private joy as a young couple, which Walter, feeling a responsibility beyond his own happiness, later turned into a sadly busy hospice during the height of the AIDS crisis. The play’s first half ends with a beautifully embodied evocation of that lost generation.

I hesitate to make the unavoidable comparison to Tony Kushner’s epochal “Angels in America.” “The Inheritance” fully deserves consideration on its own terms.

The sense of responsibility to a larger cause and to a grander narrative animates not only some of Lopez’s characters but the playwright himself. The show begins with the large cast of young men being led by Forster (also played by Hilton) to tell their contemporary stories. With diverting meta-theatrical flair, they step up to fill in the contours of a seemingly improvised narrative, though they occasionally resist the story’s darker turns, in particular, the fraught chapters that precede their relatively carefree era. (For one, Forster himself was a closeted gay man; his 1912 novel Maurice, about two men finding happiness together, was not published until after his death, in 1971.)

But as brilliantly as Lopez and Daldry pull off many of these effects, the self-consciousness of the gestures can be cloying. At one point, Eric invokes the culture-preserving, meaning-making power of the “Mahabharata” and the “Odyssey.” And a cherry tree on the property of the sacred upstate home doesn’t just have pig’s teeth in its bark, a nod to folk superstition conjured by Forster; it must also evoke in passing the tall tale of young George Washington and his ax.

Myth-making doesn’t need such asterisks and footnotes. I hesitate to make the unavoidable comparison to Tony Kushner’s epochal “Angels in America,” another two-part play on gay themes; “The Inheritance” fully deserves consideration on its own terms. But one thing you can say for Kushner: He put gay men at the center of the American narrative, fully and unapologetically. For all his brassy confidence as a dramatist, Lopez’s writing betrays a youthful insecurity that it won’t signify unless he spells out what it is signifying. And so we get stump speeches about the American body politic in the Trump era, about appropriation and social justice, about the resilience of HIV.

These are far less effective than a series of riveting monologues, particularly by older actors, about the past and its reverberations into the present. It is these and Eric’s devotion to hearing them out that link “The Inheritance” to a robust legacy of plays about what the gay experience can teach us all about the steep cost of love and the even steeper cost of the failure to love. I’m thinking of 1980s-era works like Larry Kramer’s “The Normal Heart,” Martin Sherman’s “Bent” and William Finn’s “Falsettos,” in which the battles are not only with the prejudices of the outside world but within the frightened, damaged hearts of characters who must learn the hard way how to heal and forgive. Their, and our, only hope would seem to lie in the desperate formulation of another closeted gay English author, W. H. Auden, who wrote at the outbreak of World War II, “We must love one another or die.” It is not quite Jesus’ Great Commandment, but it will do.