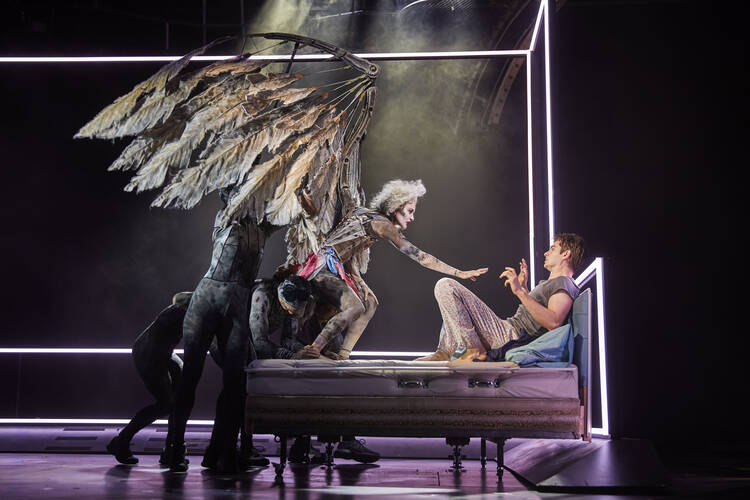 The two-part play “Angels in America” was conceived late in the Reagan administration, as AIDS was raging and the Cold War was beginning to thaw. It debuted on Broadway in 1993, less than a year after Bill Clinton’s inauguration. The Soviet Union and the Berlin Wall had been dismantled, and though H.I.V./AIDS remained a global pandemic, it was in its waning years as an immutable death sentence; antiretroviral treatments would render it largely manageable for many in the West by 1996.

This history may form the backdrop for a seven-plus-hour epic that its author, Tony Kushner, gave the subtitle “A Gay Fantasia on National Themes.” But on the evidence of a smashing new Broadway revival, “Angels in America” has flown blessedly free of its period to claim a place in the momentous, disorienting history unfolding before us now. It does not hurt that one of the play’s subjects is the moral rot of the Republican Party, a topic that could not be more topically relevant; or that the real-life lawyer Roy Cohn (portrayed brilliantly by Nathan Lane), who declares himself “the heart of modern conservatism” as AIDS ravages his body, represents a rapacious, zero-sum worldview clearly shared by his onetime client, Donald Trump.

A new revival of the Tony Kushner play feels both timely and timeless.

But these resonances hardly explain why “Angels” feels both timely and timeless, or why this revival soars so high and lands so hard. Part of the play’s enduring power is simple entertainment value: Its inimitable mix of camp, politics, science fiction and melodrama makes its nearly eight-hour run time glide by. Its subjects are dark and vast, but its sheer human vitality—with some superhuman assistance—shines so brightly it is almost blinding. And funny: You wouldn’t know it from the HBO movie version, or from a somber, miniaturized 2010 Off Broadway revival, but this play has more laughs than many ostensible stage comedies.

The laughs don’t come cheap, though, and many of them cut as deep as the dramatic turns. When Joe Pitt (Lee Pace), a closeted gay Mormon lawyer being mentored by Roy Cohn, fights with his Valium-addicted wife, Harper (Denise Gough), she strikes back with acid wit. “Maybe I’ll give birth to a pill,” she responds when Joe calls her bluff that she may be pregnant. “That would give a new meaning to pill-popping, huh?” The play’s two main magnetic poles are, I don’t think coincidentally, its two AIDS-afflicted characters: the aforementioned Cohn, a sputteringly vindictive viper to whom Lane lends full gravity without stepping on his jokes, and Prior Walter (Andrew Garfield), a young gay man as stocked with one-liners as eyeliner who becomes, miraculously, an oracle and a prophet of the impending millennium.

“Angels in America” has flown blessedly free of its period to claim a place in the momentous, disorienting history unfolding before us now.

If that sounds like a left turn, it is the play’s signature move: The merely earthly becomes the cosmological, as a literal Angel (Amanda Lawrence) bursts through Prior’s apartment ceiling and demands that he bring a new epistle to humankind. Her message is unlike anything delivered in the Torah, the New Testament or the Book of Mormon (a clear inspiration for Kushner’s angelology): God has left heaven because humans will not stop migrating, mingling and progressing. To bring back order to creation, humans must simply stay put. Fluttering her wings angrily, she exclaims to Prior: “Hobble yourselves! There is no Zion save where you are.”

This is where I have to register one of my small objections to the new production, which began at London’s National Theatre and is directed, as it was there, by Marianne Elliott (“War Horse” and “The Curious Incident of the Dog in the Night-Time”). Elliott has reimagined the Angel as a sort of junkyard eagle, a feral scrapper held aloft by bodysuited supernumeraries rather than suspended by wires. It is a strong choice, but it skirts the edge of silliness. Indeed, Elliott’s bold style choices throughout raise as many questions as they provide answers: Over-the-top blasts of orchestral music smother many scene transitions, and neon bars around the edges of Ian McNeil’s often half-finished set pieces seem an arbitrary flourish. But perhaps they aren’t so random: There is a kind of payoff for all of these elements in the more fantastical second play, “Perestroika,” which achieves some stunningly layered effects as the various storylines weave, untangle and ascend literally into heaven.

The play’s subjects are dark and vast, but its sheer human vitality shines so brightly it is almost blinding.

It is also in the second play that Garfield’s Prior comes into his own, and his guilt-wracked ex-lover, Louis (James McArdle), comes into sharper focus. In the first play, “Millennium Approaches,” both fall short of full emotional plausibility: Louis ostensibly abandons Prior as his AIDS symptoms grow, but neither Prior’s terror of the disease nor the self-loathing required for Louis to commit such a senseless personal crime are entirely convincing. (The fault lines rending Joe and Harper’s marriage, by contrast, ring painfully true.) But in “Perestroika,” Garfield is positively ebullient, as much tour guide as protagonist as he explains the Angel’s visitation to his friend Belize (Nathan Stewart-Jarrett), then takes matters both romantic and spiritual into his own hands. Likewise, the hair-trigger sensitivity that made McArdle unbelievable as a jerk makes him an involvingly tortured soul in the second half.

Ultimately, “Angels in America” may have held up so well after a quarter century because Kushner has given full value to all the parts of his subtitle: gay, fantasia and national themes. He might just as easily have said “universal themes” since the subjects the play so heartily makes a meal of—freedom, responsibility, dignity, faith, sexuality—are hardly the exclusive properties of Americans. “An angel is a belief, with wings,” says Hannah (Susan Brown), a stoic Mormon matriarch. Kushner’s “Angels” is a play of ideas made flesh.

I recall watching a screen version of this play and turning it off a little over half-way through because it was unwatchable. I assumed it was a gay thing, but God forbid I would say that I didn't like it after all of the rave reviews it received (by the homosexual media and its minions)

Did anyone else think it stunk? I found this quote:
Lee Siegel wrote in The New Republic, "Angels in America is a second-rate play written by a second-rate playwright who happens to be gay, and because he has written a play about being gay, and about AIDS, no one—and I mean no one—is going to call Angels in America the overwrought, coarse, posturing, formulaic mess that it is.

Glad to see I was not the only one who felt that way; wish I had the guts to have said it.

What incredible courage it must have taken to make fun of Roy Cohn and Mormons in the same play. I do agree with the author that some of us will react to this play the same way in 2018 as we did in 1993 - in my case, and no doubt in many others, with studied indifference.

A nasty bit of liberal propaganda provided by the editors of America. Thank you editors. Do you have any more to say about the "moral rot" of the Republican Party? Or of the Democratic Party?

Although I didn't see this play, as a gay man who remembers when AIDS was first receiving substantial news coverage, I have a personal stake here. I had sex with men many years ago. I didn't then and don't now believe that AIDS is a punishment from God for being homosexual (as the late Rev. Jerry Falwell and some other clergy stated years ago). First, the Church clearly teaches that there is a significant difference between one having a gay orientation (which though "disordered" is not immoral) and having gay sex (with is immoral). I did regret my behavior, and received forgiveness and consolation through the Sacrament Reconciliation with a compassionate priest. However, as the catechism states, gay people should be treated with respect and compassion. As a teenager and young man, I was often taunted by people who (rightly) assumed that I was gay, though I hadn't revealed my orientation. Although I definitely agree with Church teaching that gay marriage is not possible, I do think that some people are hostile towards gay men and women. I admire Pope Francis for both upholding the teaching that marriage is the union of one man and one woman, while being sensitive to the struggles many gay people face. Finally, while I agree that both major parties have "moral rot" in different ways, I think that the violence of legal abortion espoused by the Democratic party is of paramount importance.