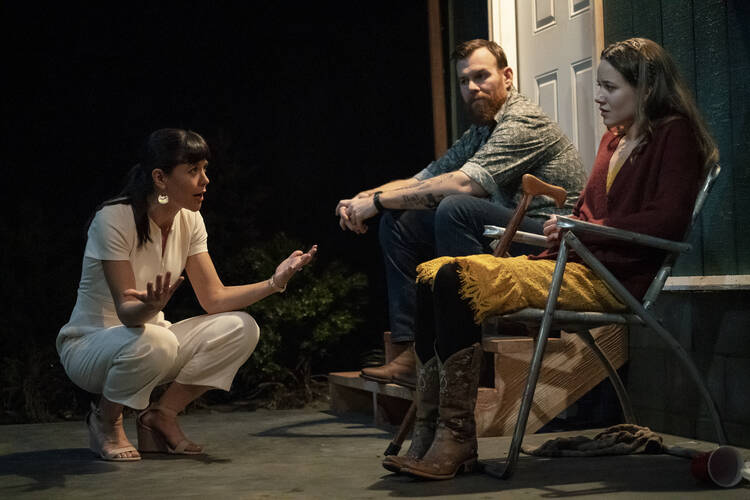 “I’m not someone who likes arguing,” said the playwright Will Arbery over waffles and eggs at a New York City diner recently. Fortunately for theatergoers, he is clearly a writer drawn to people who argue, and he has put five choice specimens onstage to hash it out in his hit play “Heroes of the Fourth Turning,” running through Nov. 17 at Playwrights Horizons. The production has garnered some of the most uniformly ecstatic reviews I have seen in years, not only from mainstream theater publications but from a variety of Catholic and conservative publications as well.

That is because the arguers Mr. Arbery puts in a Wyoming backyard in the dim, straggling hours after a party—most of them recent graduates of a Catholic college there—are all “conservative Catholics” of some variety or other. Their post-collegiate eagerness to mix it up with each other, to have what one calls “a big conversation” and test each other’s spiritual and emotional guardrails, is electrifying. It is also stunning how much granular variety and contention Mr. Arbery inscribes into a worldview many liberal New York theater audiences are likely to presume is more monolithic.

Arbery is clearly a writer drawn to people who argue, and he has put five choice specimens onstage to hash it out.

Not so: One man, Justin, is a soft-spoken advocate of the Benedict Option, and he casually sports a pistol on a back holster that had me on edge for much of the play’s running time. Another, Teresa, is a strident, snarky conservative pundit with a Steve Bannon-esque eagerness for culture war. Kevin is a lightly bearded lost soul with big questions and lots of pent-up sexual energy, neither of which he’s found an acceptable outlet for. And Emily is a sweet, sensitive woman racked with Lyme’s disease and a possibly more threatening affliction in this hermetic world: a willingness to listen, and empathize, with the “other” side.

Emily is the closest that liberal audiences may have to a stand-in in the play. Like all the characters onstage, she is pro-life, but she sees—feels—the dilemma of women who struggle with the issue. These students’ former teacher (and Emily’s mother), Gina, shows up late in the play, both to set them all straight and to take stock of how they are faring. Based on Mr. Arbery’s own mother, Virginia Arbery, a professor at Wyoming Catholic College, Gina is brilliantly literate and sharply skeptical of Trump-era conservative revanchism, despite her erstwhile support for Pat Buchanan. The conclusions these five characters reach by the play’s end have a political valence, no question, but they are also deeply personal and individual. As the critic Sara Holdren, from New York magazine, succinctly put it, “It’s not actually about its characters’ talking points at all. It’s about them.”

Mr. Arbery, 30, has written a number of plays, including “Plano,” a stark, funny, surreal drama inspired by three of his seven sisters. But “Heroes of the Fourth Turning” unquestionably feels like the big play he has had in him, if not all his life, then for many years of quietly watching and listening to his fellow Catholics and conservatives.The question for many in his audience is whether he is still among those ranks, and specifically which strain of Catholicism, if any, the playwright himself identifies with. It is a question Arbery is “suspicious of,” he told me over breakfast.

Arbery has written a play based on many years of quietly watching and listening to his fellow Catholics and conservatives.

“In the response to this play, people are looking for clues—basically clues about my soul, I would say,” said Mr. Arbery, a bespectacled, bearded man with a gentle presence and an occasional nervous giggle that bespeaks both delight and bemusement. “The question of whether I go to Mass or not, whether I’m lapsed or not—that sort of myopia just immediately sends me back to the feeling I had in high school. In the play I call it the panopticon, the feeling that you’re being watched.”

If Mr. Arbery wouldn’t commit either way when we spoke, it is to an extent a version of the “let the art speak for itself” argument. As he put it, “Part of the reason I don’t want to lay out really clearly, tempting though it might be, what my positions are and what my personal life is like is that part of what this play is trying to do is to topple some of our dependency on that as experiencers of art in this day. Can we get back to a place where we’re experiencing the thing itself on its own terms, rather than looking to the creator for clues about where exactly it stands politically, and whether it falls into some sort of party line?”

Mr. Arbery insists that his reluctance to pledge allegiance to any side is itself a commitment, not to complacency but to deeper engagement.

Of course, playwrights like Tony Kushner or Lynn Nottage, even David Mamet, seem happy to trumpet their political and personal commitments outside their plays, and sometimes in them. But Mr. Arbery insists that his reluctance to pledge allegiance to any side is itself a commitment, not to complacency but to deeper engagement.

If his play is making an argument, he said, “It’s an argument for listening. The play was designed to linger in people’s minds long after they saw it, to create conversations that couldn’t be resolved with one post-show drink. I’m not providing a diagnosis, I’m not providing an answer—you won’t find an easily articulable conclusion.”

Mr. Arbery often paused for long stretches when I asked direct questions about his faith and his politics.

In the context of a New York theater production, a plea for “listening” could be read as, “Liberal audiences should listen to conservative views they don’t usually take seriously.” But Mr. Arbery means it the other way around too: “Listening is what I’m offering to everyone, and arguing for. Catholic conservatives ignore that call at their own peril, and that’s how I always felt growing up—there wasn’t enough listening to what the other side was actually saying.” He wonders, for instance, why progressive audiences and critics seem willing to take “Heroes” and its characters seriously, but conservative audiences are unlikely to have seen or sparked to another recent production at Playwrights Horizons, “A Strange Loop,” Michael R. Jackson’s hall-of-mirrors musical about a young black gay man in New York City.

Mr. Arbery often paused for long stretches when I asked direct questions about his faith and his politics, and at one point confessed, “What you’re witnessing in real time right now is part of what has been the entirety of my life, this sort of toggling back and forth between these two ways of seeing the world.” His mother, he said, calls it “the fissure space. I am in that space right now, and it’s weird—I feel called to deny both sides a full, complete understanding of my soul.”

His parents saw and loved the play, though his father, Glenn Arbery, said that he “felt a little soul-scoured.”

Speaking of his parents: Both saw and loved the play, though his father, Glenn Arbery, also a professor at Wyoming Catholic College, told his son that he “felt a little soul-scoured.” Mr. Arbery said he thanked them for receiving the “difficult gift” he intended the play to be, adding, “I’m not trying to scour anyone’s soul!”

Neither am I. If I had to guess, I would say that Mr. Arbery is a version of a semi-lapsed believer I recognize (and have occasionally been myself). These are folks who find themselves unwilling or unable to reject a vestigial religious identity outright. But they are also too serious-minded about the grave claims made by that faith to simply take them at face value, or not to test them against equally serious counterclaims.

I would also add that Mr. Arbery’s magnificent, multifaceted play deserves to be taken on its own terms, quite apart from his biography. Among its other merits, “Heroes” speaks loud and clear to our divided cultural moment—a time when, as Mr. Arbery diagnoses it, “There’s a desperately dangerous lack of love happening right now; we love our factions, we love our tribes, but we don’t love each other.” But it addresses this conflict, not by venturing directly into the debates agitating our headlines, but by portraying, with a full measure of humor and pain, the feelings those debates arouse among some very specific and articulately imagined fellow creatures. Mr. Arbery told me that the play arose in part from his interest in “the animal nature of debate, and the way ideas can take over a body—what talking for a long time very fast does to a body, and what listening does to a body.”

It is an exercise uniquely suited to the theater, and not easy to pull off. When I praised how well he and the director Danya Taymor had balanced the play’s fine-grained specificity with its undercurrents of feeling, Mr. Arbery recalled a sixth-grade history teacher who wrote on the chalkboard his first day of class, “Attention to detail is the key to success.” That became something of a mission statement for Mr. Arbery, he said. When I reminded him of the apocryphal saying, “God is in the details,” he responded, “So that’s the answer to, ‘Do you go to church?’ God is in the details.”

Correction, Nov. 22. This essay has been updated to reflect that most but not all of the characters featured in “Heroes of the Fourth Turning” are graduates of a small Catholic college in Wyoming.

Thanks for bringing this play to my attention. It got me think of Jonathan Swift's line, "We have only enough religion to hate, and not enough to love."

About as electrifying as watching the squabbles of a clutch of newly hatched chicks, I would expect.

The faith of our fathers is ONE, holy, apostolic and universal.
Heresy is pleomorphic.