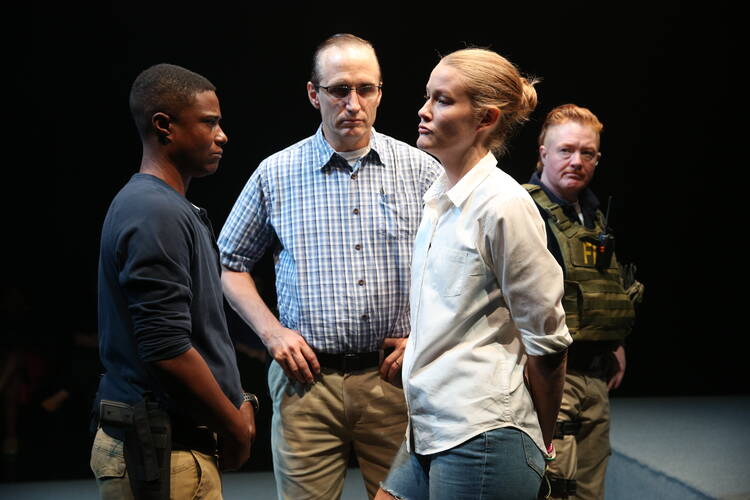 Imagine you have just come home from the grocery store, and two men in plainclothes with side holsters are in front of your house. They are from the F.B.I. and they have a search warrant, they say, and minutes later you’re inside, in your nondescript laundry room, negotiating with them over what will happen to your phone and your pets. That is because you may be going away somewhere for a long time—they are not even sure. They will have to “make some phone calls.”

This nightmare-in-broad-daylight scenario, with its mix of the everyday and the extreme, is the gist of a remarkable new play, “Is This a Room,” at New York’s Vineyard Theatre. It is a verbatim reenactment of the F.B.I.’s hour-long interrogation of Reality Winner, the Georgia intelligence contractor who in 2017 was arrested for leaking classified documents about Russian election interference to the website The Intercept and is now serving a five-year sentence under the Espionage Act. Not a word is added to or subtracted from the transcript (available here), with the text’s redactions indicated by quick blackouts and a lightly booming sound cue.

The play is a verbatim reenactment of the F.B.I.’s hour-long interrogation of Reality Winner, the Georgia intelligence contractor who was arrested for leaking classified documents.

The result is an agonizingly suspenseful, often mordantly funny verbal scrimmage between two obtusely awkward if ultimately effective officers (Pete Simpson, TL Thompson) and their accommodating-to-a-fault subject (Emily Davis). She jokes with them, and they with her, albeit so tensely it sometimes seems they are about to burst into tears; they deliberate painstakingly about where and how they will talk. Before long, the full confession of her crime—printing out a five-page classified document she wasn’t supposed to read in the first place, sneaking it past security by tucking it in her pantyhose and mailing it to a news outlet—tumbles out of a rinse cycle of half-denials and minor concessions.

Winner has since contested the validity of her confession on the grounds that her Miranda rights were not read to her. In the interrogation, the agents repeatedly stress the “voluntary” nature of their conversation, which elicits nervous laughter in the play—how voluntary, after all, can a conversation be opposite two armed male agents? Meanwhile, a third agent, named in the transcript only as “Unknown Male” (Becca Blackwell), hovers around the perimeter, armed and ready with unsettling non-sequiturs at key moments. “I can beat you,” he says at one point to Winner. He means only that his tale of remote military service can outdo hers, but it doesn’t read that way in the room.

The concerns raised by the play could hardly be more timely.

The director Tina Satter and her peerless cast play it all so straight, with a scenario that is so intrinsically involving, that we barely notice the increasingly stylized staging. At one point, Winner and her interlocutors stand in a tight, low-lit cluster, in a tableau worthy of a Bergman film, as they intensely parse the minutiae of data storage. As the redaction blackouts become increasingly ominous, they begin to obscure what seem like the most relevant documentary details that would make the piece echo current headlines. And the constraints of the transcript-only format mean we don’t learn much about why Winner, a brilliant, driven young woman fluent in a number of Afghan languages, saw fit to leak the document in the first place.

This has the curious effect, though, of making “Is This a Room” resonate even more deeply and widely. The concerns raised by the play could hardly be more timely—the fate of would-be whistle-blowers within the “deep state,” the leaking and weaponization of classified documents, the security of elections from foreign interference. But in its tiny, economical frame, “Is This A Room” also bottles the anxieties of our post-9/11 world, with our endless war on terror and our bulked-up national security state. As we have ostensibly looked outward to defend against threats, we have also turned inward to view our fellow citizens with toxic suspicion—a tendency that has grown into something like a pathology in our current age of polarization and mutual distrust.

This continuous link is not often explicitly made, let alone dramatized, in the disorienting heat of our current moment. But between the trauma of the attacks of Sept. 11, 2001, and the disastrous wars it spawned, and the jarring partisan realignment of the current Trumpian moment, one can discern a single 21st-century American narrative of retrenchment and recrimination. (You don’t have to reach back far for Cold War analogues, if you’re so inclined.)

It is as if Tina Satter, the play’s conceiver and director, has taken a blood sample of our nation’s free-floating angst and terror, compressed it into a serum and doled it out in a dropper-sized serving that is all the more potent for its small dosage. There is no promise of healing in it, but it may offer a clarifying light. The program for “Is This a Room” does not credit a playwright. You might say the author is reality.