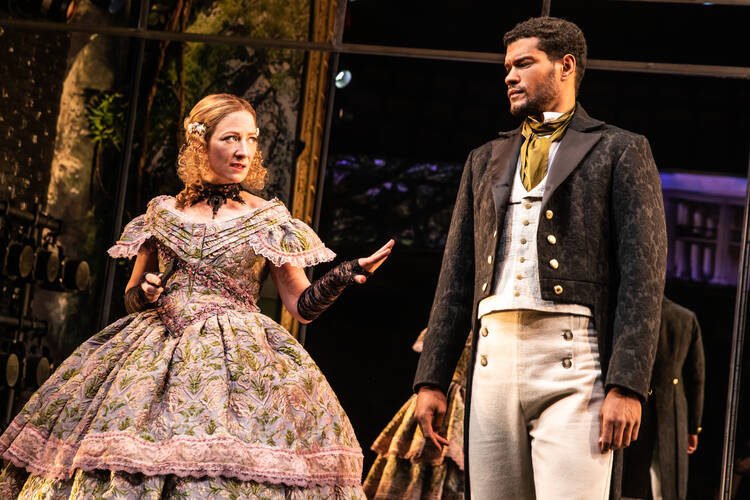 Chattel slavery as it was practiced in the United States for centuries was not just an economic system but an organizing principle of American life, and as such, has proven hard to shake even a century and a half after Emancipation. It found its justification in the racist notion that people of African descent were genetically inferior, and while that hereditary slur was an evil lie, what has clearly been passed down through the generations is the stain of white supremacy. To our lasting shame, racism would seem to be in our metaphorical DNA.

In his sensational new play, Jeremy O. Harris posits that racism may poison our most intimate relationships.

It is not much of a stretch, then, for the playwright Jeremy O. Harris to posit, as he does in the sensational new “Slave Play,” now on Broadway, that racism may poison our most intimate relationships as well. With disarming frankness, the play follows the attempts of three interracial couples to face and overcome their sexual dysfunction. First, we watch them enact an elaborate form of improvised costume play comprising slave-and-master sexual scenarios, only to have those break down into a group therapy session to “unpack” their experiences. It does not go well for them, or for the well-meaning academics running the experiment.

It is easy to see why the regimen these two earnest psychologists risibly label “Antebellum sexual performance therapy” backfires. Rather than purge the racist dynamics from these couples’ relationships, it seems to be reinscribing them. As Jim (Paul Alexander Nolan), a white man who had half-heartedly embodied the role of an abusive master, puts it, “I feel like this whole thing is traumatizing my wife.” He doesn’t know the half of it, as his wife, Kaneisha (Joaquina Kalukango), ultimately sees through the whole enterprise to probe an even deeper wound.

No one emerges unscathed, not least the liberal academics versed in recondite jargon about gender and race.

As fodder for drama (and comedy), though, this half-baked therapy idea is gold, and Harris mines it with gleeful mastery. In the group session that is the play’s centerpiece, the couples turn on each other, at first reluctantly, then with explosive venom. No one emerges unscathed, not least the liberal academics versed in recondite jargon about gender and race.

Harris’s play, though, appears to believe in its own kind of exorcism-by-trauma, as Kaneisha struggles to understand and explain her increasingly visceral distaste for Jim, a Brit. Though initially attracted to his non-American whiteness because it seemed unmarred by our national assumptions about race, she has begun to recognize this as a kind of denial, and she wants him to grasp this as well. The means by which he finally comes to see this—no spoilers here—feels both contrived and, within the play’s sealed world, inevitable.

While “Slave Play” is both razor-sharp and ruminative about the ways we see and feel race, the play’s take on sex feels reductive.

Indeed, while “Slave Play” is both razor-sharp and ruminative about the ways we see and feel race, even or especially in 2019, the play’s take on sex feels reductive. It’s not just that the opening tableaux veer close to porn but obviously can’t go all the way, thus falling into an uncanny valley of simulated titillation; it’s also that even when the couples talk about sex, they address it in purely instrumental terms—what turns them on and not, what will “work” better in the bedroom. This fault is hardly unique to this play, but it is symptomatic of a culture in which intimacy has been infected by many more pathogens than racism.

‘Novenas for a Lost Hospital’: An elegy for a place of sickness and grace
Rob Weinert-Kendt

If, as a result, “Slave Play” ultimately feels closer to a stunt-like provocation than the cleansing catharsis it appears to want to be, it is not for lack of excellence all around. Under Robert O’Hara’s strong direction, the work of the first-rate acting ensemble has only deepened since the play’s Off-Broadway run last year (only Kalukango is new to the cast).

There has been a fair amount of chatter about the controversy the play has stirred, particularly among some black audiences, and about how unlikely a Broadway property it is. But “Slave Play” hardly feels out of place there. It may not be a home run, by my lights, but it is unmistakably a swing-for-the-fences effort, and it is a memorable calling card for Harris, a restless, unsparing, playfully serious voice we will be hearing from for a good long while, if we’re lucky.

1
Cardinal McElroy: Sex and sin need a new framework in the church
Jesuitical
2
Pope Francis: Critics who used Benedict’s death ‘have no ethics’
Gerard O’Connell
3
Popes on a Plane: How the Boeing 747 changed the Catholic Church and the papacy
Jim McDermott
4
Cardinal McElroy on ‘radical inclusion’ for L.G.B.T. people, women and others in the Catholic Church
Robert W. McElroy
5
‘Sin is the failure to bother to love’: A history of Catholic ethics and morality
David Gibson

Pope Francis: Critics who used Benedict’s death ‘have no ethics’
Pope Francis hit out strongly against the way people have sought to manipulate Benedict’s death. “People who instrumentalize such a good person, [a man] of God, almost I would say a holy father of the church, have no ethics,” he said. “They are of a party, not of the church.”
Gerard O’ConnellFebruary 05, 2023