‘Novenas for a Lost Hospital’: An elegy for a place of sickness and grace 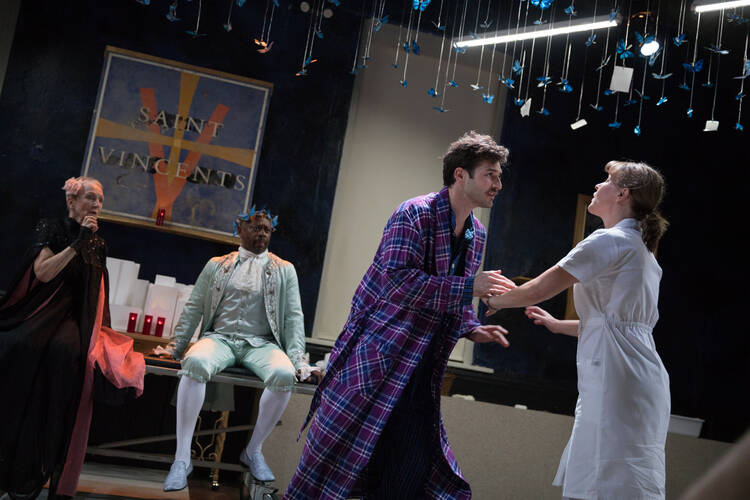 For those of us who believe in souls, in the divine particularity and dignity of each human life, a hospital isn’t just a medical facility but a veritable way station in and out of this world, as well as an intermittent rest stop on the journey. For the poor and indigent of New York City, St. Vincent’s Hospital in Greenwich Village was such a place, beginning in 1849 and ending in 2010. (And not just the poor: My oldest son was born and spent a month in the NICU there less than a year before it closed.)

“Novenas for a Lost Hospital” dives into the history of St. Vincent’s in Greenwich Village.

The first and last Catholic hospital in New York nursed the city through cholera and AIDS epidemics, as well as weathering its own financial and civic storms, and it has arguably never had a proper memorial of its own. Into that breach steps the new play “Novenas for a Lost Hospital,” at the tiny Off-Broadway venue Rattlestick Playwrights Theater, mere walking distance from Greenwich Lane, the new condominium complex that stands where St. Vincent’s once did. The play makes the most of this proximity, concluding with a guided promenade to the AIDS memorial across from the old site, at which the audience is invited to lay down candles and memories of loved ones.

“Novenas” also begins with an ambulatory memoriam of sorts, as we are ushered into the courtyard of St. John’s in the Village, a nearby Episcopal church with a local history nearly as long as St. Vincent’s. Music is played, hands are washed and a docent points out a green door off to the side, the location of the extraordinary HIV/AIDS ministry begun in the 1990s, the Open Door. A man in a toga-like sheet sponges himself on small, gauze-hung stage, and performers cavort to a cello and flute whose classical tune morphs felicitously into the disco-era earworm of “The Hustle.”

The show’s spirit guides are two great New Yorkers known for their Catholicism and their charitable works: Pierre Toussaint and Elizabeth Ann Seton.

The play that intervenes between these two outdoor outings, though, is a mixed blessing. Playwright Cusi Cram and director Daniella Topol have conceived an overlong evening of reminiscence, exposition, argument and affirmation, delivered by an able and versatile cast. The show’s spirit guides are two great New Yorkers known for their Catholicism and their charitable works, if not for any direct association with St. Vincent’s: Pierre Toussaint, a hairdresser from Haiti who was declared venerable by the pope in 1996 for his work for the poor and indigent, and Elizabeth Ann Seton, the founder of the Sisters of Charity and the first American-born saint.

To the play’s credit, it is not a strictly linear history, instead jumping around between eras and making serendipitous connections among them. The Christian commitment to accept and attempt to heal all comers has been radical in every age. Over time at St. Vincent’s that commitment went against the grain of anti-Catholic prejudice, racism, homophobia and, finally most crushing of all, the imperatives of market capitalism; we watch both 19th-century Irish nuns and contemporary nurses in scrubs face down these obstacles with similar frustration and aplomb. Even among well-meaning folks, good-faith conflicts over medical technology and ethics are as old as Hippocrates and as current as Zubik v. Burwell.

To the play’s credit, it is not a strictly linear history, instead jumping around between eras and making serendipitous connections among them.

Played with lightly-worn authority by Kathleen Chalfant, Seton initiates the process of “remembering,” in both its physical and metaphorical sense—putting the pieces, or members of the body, back together. And Toussaint (Alvin Keith) is on hand to provide counterpoint, highlighting some of the ways the church, not to mention the nation, has fallen short of its stated ideals. Another character who provides a sort of throughline is an unnamed dancer and choreographer afflicted with AIDS (Justin Genna), whose advice to his charges, to “find their roots” even as they leap free, resonates throughout many stories, not least that of the hospital itself, as the neighborhood around it mercilessly changes.

On the other hand, that “roots” line is repeated maybe a few times too often. If Cram’s script has a central weakness, it is her sweet tooth for platitudes: “Science and religion—not easy bedfellows!” “There are many ways to be a revolutionary.” “Hope is the miracle.” Her characterizations can also be tinged with sentimentality: A nurse tells a colleague she just knew he would do well in surgery “because you care deeply.” Uh huh.

Shakespeare gets a sitcom in ‘Upstart Crow’
Rob Weinert-Kendt

A few scenes, especially in the play’s latter half, pop vividly to life. There’s a messy, painfully timely argument among contemporary medical workers about the mismanagement and malfeasance that led to St. Vincent’s demise, and a salon session with a woman (Kelly McAndrew) who laments the Village’s fate to her stylist, and memorably tags herself as “that rarity: a middle-class person from Manhattan.”

Perhaps best of all, though, is a scene in which the young dancer, in defiance of his deteriorating condition, springs hopefully into an empty hospital room he envisions as a studio where he can create new work. Like us, the nurse with him knows that is unlikely to happen. But maybe hope is the miracle.