What is hopepunk and why is it so quintessentially Catholic? 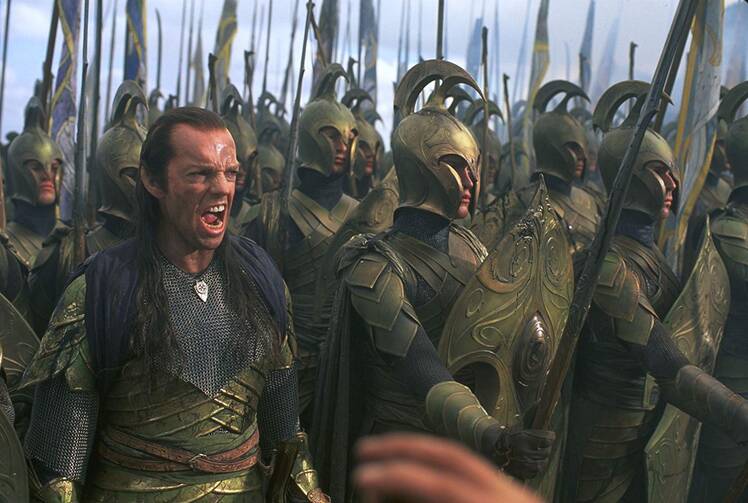 About a year ago, the fantasy writer Alexandra Rowland posted on Tumblr that “The opposite of grimdark is hopepunk. Pass it on.” By “grimdark” Rowland was referring to the trend in pop culture toward the brutal and hopeless—stories and worlds where everything is lost and everyone is revealed to be kind of a monster. Think “The Walking Dead,” “Breaking Bad” or the Zack Snyder-helmed DC Comic book movies.

“The essence of grimdark,” Rowland wrote in a follow up post, “is that everyone’s inherently sort of a bad person and does bad things, and that’s awful and disheartening and cynical. It’s looking at human nature and going, ‘The glass is half empty.’”

Hopepunk refers to stories that reject that fatalism. “YEAH, we’re all a messy mix of good and bad, flaws and virtues,” she writes. “We’ve all been mean and petty and cruel, but (and here’s the important part) we’ve also been soft and forgiving and KIND. Hopepunk says that kindness and softness doesn’t equal weakness, and that in this world of brutal cynicism and nihilism, being kind is a political act. An act of rebellion.”

Hopepunk insists there are streams of life-giving water all around us—stories, people and experiences to which we can still turn for inspiration and renewal.

It’s Sam helping Frodo in The Lord of the Rings, Ron and Hermione running away with Harry Potter to try and bring down Voldemort, or Peter Parker continuing to crack jokes and risk his life out of a sense of responsibility.

It’s also, says Rowland, the protagonist of “The Handmaid’s Tale” trapped in a nightmare America ruled by religious misogyny, refusing to give up on herself or her daughter. The concept of hopepunk doesn’t exclude difficult, even horrifying realities, but offers characters who fight on and continue to believe in the possibility of something better in the face of them. “‘Don’t let the bastards grind you down,’ is one of the core tenets of hopepunk,” Rowland asserts, quoting “The Handmaid’s Tale,” along with Martin Luther King’s line, “‘The arc of the moral universe is long, but it bends towards justice.’”

Since Rowland’s initial comments, conversation about this concept of “the hopepunk” has found its way into everything from politics to pregnancy. “Is it hopepunk to have a baby?” Tom Whyman asked at The Outline last week. Some argue hopepunk is a template for Trump-era resistance, while others say it doesn’t go far enough. Just after Christmas Vox devoted an entire explainer to Rowland’s idea.

It’s Sam helping Frodo in The Lord of the Rings, Ron and Hermione running away with Harry Potter to try and bring down Voldemort.

In the church today we find ourselves facing our own forms of “grimdark.” Many people have been lied to and feel abandoned by leaders, and some prelates have used this difficult moment to try to scapegoat gay Catholics or even blow up a papacy whose ideas they don’t like. Stare too long into the depths of this crisis and it becomes difficult to see any good outcomes. Like Denethor in the Lord of the Rings, we look into the future, see only darkness, and wonder if it wouldn’t be better to just set the whole thing on fire right now. Even more than the end of hope, despair is a death of the imagination, a desolation of any fresh possibilities or ideas.

But I wonder if this idea of the hopepunk doesn’t offer us a category to help us through that. Before what looks like endless awful stasis, hopepunk insists there are streams of life-giving water all around us—stories, people and experiences to which we can still turn for inspiration and renewal. Our very faith is built upon such a story, one in fact so ridiculously unafraid of the worst that reality can throw at us that it chose to make the moment of its most horrendous loss the icon of its hope.

Death on the cross is the beating heart of Catholic hopepunk.

Death on the cross, understood not as some brutal cosmic math equation but a personal choice to continue to love and give and believe even when your life is at stake, is the beating heart of Catholic hopepunk. So is Jesus’s vision of the Kingdom of God as a banquet where all are welcome and called to kindness, and the lives of holy people like Martin Luther King, Jr., St. Francis of Assisi or Mary MacKillop, R.S.J., who refused to accept the premises of the reality in which they lived and experienced their own deaths and resurrections as a result. It’s Greg Boyle, S.J., insisting “There is no ‘them’ and ‘us,’ there is only us,” young people from all over the world traveling to Panama to create and imagine the church or Mary Oliver inviting us over and over in her poetry to consider “our one wild and precious life.”

We also get a glimpse of what a Catholic hopepunk can be in the public activity of Pope Francis, the caring gestures he offers to people, the way he hugs refugees and the sick, makes room in the sanctuary for wandering children and kisses the feet of prisoners. Where grimdark voices in the church want popes and prelates to spend their time fighting the same tired culture wars, or want us to believe there is no other way, Francis and others like him instead choose to offer experiences of God’s love. They ask questions rather than issue edicts, and dismiss the “bishop is supposed to have all the answers” take on Christianity in favor of church as a community of diverse voices whose ideas and even disagreements can bear great fruit. The “normal” way of proceeding is not the only way, they tell us, and their often-joyous disruptiveness open up new possibilities.

Hopepunk reminds us of the conviction of our own faith community that what is needed, indeed what is possible, is not strength or purity but striving. “Remember: Hopepunk isn’t about moral perfection,” Rowland writes. “It’s not about being as pure and innocent as the new-fallen snow. You get grubby when you fight. You make mistakes. You’re sometimes a little bit of an asshole. Maybe you’re as much as 50% an asshole. But the glass is half full, not half empty. You get up, and you keep fighting, and caring, and trying to make the world a little better for the people around you. You get to make mistakes. It’s a process. You get to ask for and earn forgiveness. And you love, and love, and love.”

At one time it was a requirement of priests at Easter to try and make their congregations laugh so hard the sound rang from the rafters. Their joy was meant to be an experience of the degree to which Christ had rendered fear and despair absurd. During my own first Easter as a priest a just-baptized baby urinated all over me before a congregation of 1,500 people, and laughter did echo off the roof. What was more surprising, in the midst of that unexpected (and for me really gross) moment we did indeed feel like a community united in joy.

That is the point and opportunity of hopepunk: the Spirit does not follow the rules we set down. Grace rebels and God thrives not in some impossible sanctity but in the actual mess of our humanity. The reality of our church letting us down, says a Catholic hopepunk, is not a call to resignation but empowerment. The future is not about Pope Francis fixing everything but we ordinary Catholics taking up our own crosses together, fighting for a church more like Jesus, spontaneous and welcoming and celebratory, and trying to love, and love, and love.

Hopepunk. First I’ve heard of this. Good word. I like it. And certainly needed now with grimdark in powerful places.

The Eagle and Child

I like the term hopepunk too.
I like it a lot. I'm going to work on a visual symbol for it.
And I wish I could have been in that laughing Easter congregation.

I love the idea of hope as a conscious act of rebellion. That would have been a welcome insight to the adolescent me of many years ago.

Death on the cross was not the most horrendous loss in Christianity.

Far worse are those instances when those who suppose themselves Christian chose not to comply with the most important instruction Jesus gave us, to care for those in need, to care for the poor.

Beautifully written indeed! Thank you Father for this lovely article. I now learn a new word that I can use it as a motto for quite a while.

This article couldn't have come to me at a better moment--unless it was twenty years ago, or thirty, or fifty. The idea of “hopepunk” helps us get a handle on our unruly impulses toward love and justice. Thanks, Father, to you and to Ms. Rowland from all of us, young and aging punks alike.

that would have been inconceivable when the musical was first written, and for which it
free bejeweled 3 deserves some credit.