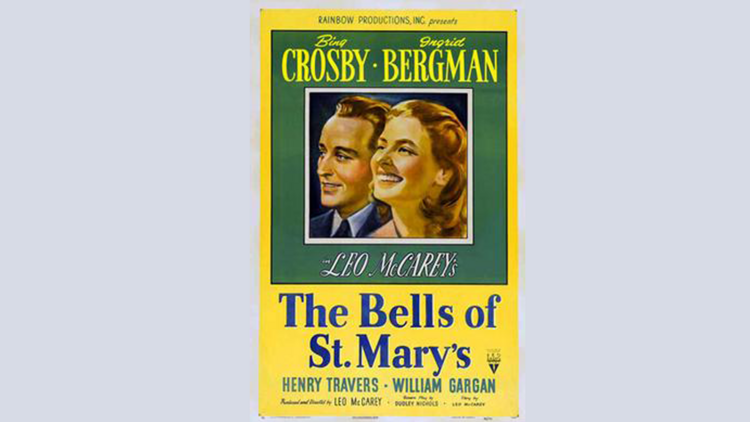 When William Mooring wrote in the Los Angeles Tidings somewhat over a year ago that Hollywood contemplated a sequel to “Going My Way,” many people didn’t like any part of it. One generous helping of anything is enough for anybody. And Leo McCarey had skirted the edge of disapproval by the narrowest of margins to score his great triumph with Father O’Malley. Now it was nuns!

As a class, nuns are defenseless people. And if Hollywood’s picture were unfair to them, they had no way of fighting back. That means a lot if you stop to think of how many young girls might—because of an unfair picture—decide not to follow God’s call to convent life.

But I liked the “Bells of St. Mary’s” far more than “Going My Way.” I think it is a better picture, and one of the loveliest portrayals of a sister’s life that could possibly be dramatically conceived. I’ve always wanted to give something to the sisters, and wish I had been able to give “The Bells of St. Mary’s.”

I saw it for the first time with two sisters from Immaculate Heart College in Los Angeles. The three of us sat in the projection room on the RKO lot talking about the heat, Father John Ward’s sudden death, and the British elections. The one thing we didn’t want to talk about was the picture. They’d said all over that it was good—and, with our fingers tightly crossed, we hoped they were right. The sisters uncrossed their fingers before I did.

When the picture was over and a reasonable time had elapsed, the lights were turned on. Mr. McCarey (very much like a little lad with specially good homework) came over to the nun and asked what she thought. We all waited for her answer.

There will be a lot of ink put on paper when the “Bells” is released to the public; people far more competent than the two sisters and I will have the task of censoring and reviewing it. But the nun had something. I went back to the projection room some days later and saw the picture again, this time in the cutting room; we stopped at the end of each reel to talk about it. Now—a week later—I’m sure sister’s judgment could not be more perfectly expressed. “The Bells of St. Mary’s” is, I think, tremendously spiritual.

About thirty-five years ago. Sister Mary Benedict died at Immaculate Heart convent. She was Mr. McCarey’s aunt. You are inclined to believe that she has been working overtime on the RKO lot all year. You don’t remember anyone’s accusing Mr. McCarey of being overly spiritual; Miss Bergman, who plays Sister Benedict, is not a Catholic; and the RKO lot is scarcely a monastery garden.

Yet Miss Bergman constantly did little things in the picture that made the sisters chuckle reminiscently, and hold their breath in surprise. Her habit is a sort of combination of Immaculate Heart and Saint Joseph of Carondelet. Her veil keeps slipping over her shoulder, and she brushes it back with a sisterly gesture that even novices find difficult; she and Sister Michael (Ruth Donnelly) go shopping and are as authentic as the Vulgate; she rebukes Father O’Malley with the humility and deftness that takes absolute years to acquire; she prays with conviction, and laughs with the peculiar lilting restraint that is one of God’s precious gifts to sisters.

The 10 Greatest Catholic School Movies of All Time
Ciaran Freeman
Miss Bergman said she never had a role whose playing she loved so much; she went to Saint Agnes Convent and spent hours learning to be sisterly; she acts the part of Sister Benedict with a vitality, humor, understanding and love that is incredible. As I was making some notes of the picture, the spirit of Hollywood overpowered me and I wrote: “The Incredible Ingrid and the Incomparable Bing.” It is a bit flashy but not bad. For Miss Bergman’s incredible Sister Benedict is complemented by Bing’s incomparable Father O’Malley.

During the making of the picture a little Jewish lad, a great admirer of Father O’Malley and of Bing, came up to him. “Lookit, Mr. Crosby,” he said seriously, “last year you stole that Oscar; this year, please win it honest.” The affection, sincerity and love of a priest’s life that Bing Crosby brings to his part far surpass anything he has ever done before.

Joan Carroll, Martha Sleeper, Ruth Donnelly, Henry Travers and William Gargan all catch McCarey’s magic, and do wonders with their part. Barry Fitzgerald does not appear in the picture.

Because few people understand the inner reality and beauty of the religious life, few dramatists have done well by the nuns. Even in the fine “Cradle Song,” the sister-heroine is lovable because of her motherliness, not because of her sisterliness. “Till We Meet Again,” originally a risqué French play, was handled carefully, even beautifully; but its portrayal was not of a nun’s normal life. And the stupid caricature of Sister Superior in “Keys of the Kingdom,” even the overly-drawn Mistress of Novices in “Song of Bernadette,” were dramatic puppets, not real-life nuns.

I felt silly about my own sentimentality on seeing the “Bells” until I talked to the hardboiled little projection operator.

“Father, so help me,” he said, “I seen that picture six times before I could stop bawling. It’s positib’ly beautiful.”

“It’s made about wonderful people, Manny,” I said.