A new puppet film tells the story of Puerto Rico, after Hurricane Maria 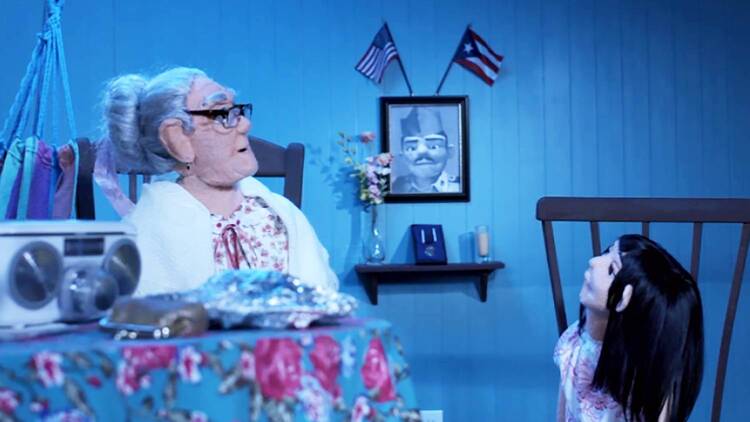 “Yo Soy Taino” is a new live-action puppet film by the screenwriter and director Alba Enid García (photo: HBO).

“Yo Soy Taino” is a new live-action puppet film by the screenwriter and director Alba Enid García. The film, which recently premiered on HBO, is 13 minutes long and entirely in Spanish. García dedicated the film to the 2,975 lives lost to Hurricane Maria in 2017, and her love for the people of the island nation shines through. “Taino” offers a brief and necessary look into the complicated history between the United States and Puerto Rico, particularly as it intersects with the culture of the Tainos, an indigenous people who were the main population in the Caribbean prior to European colonization.

Alba Enid García dedicated the film to the 2,975 lives lost to Hurricane Maria in 2017.

The film begins in a small home in the country two weeks after the hurricane. We first see Abuela Yaya as she sits in her home listening to a radio announcer. The announcer criticizes the infamous paper towel-throwing incident by President Donald Trump while visiting the wrecked nation in the aftermath of the hurricane. “There’s a disconnect,” says the radio announcer, “between the reality of life on the island and the public perception of life on the island.”

Marabelí, Yaya’s granddaughter, shows up to visit and bring her grandmother food. Yaya begins to tell Marabelí about Puerto Rican history, from 1897, when Spain relinquished its power over the country and allowed it to be autonomous, to 1917, when the United States invaded Puerto Rico. She describes to the young girl how 20,000 Puerto Rican soldiers fought for the United States during World War I, including Yaya’s husband. “They believed in the prosperity of the great United States,” says Yaya. (The film ends with Yaya removing a U.S. flag that was placed next to a portrait of her husband. She stares at his face for a moment, before uttering “¡Pendejo!” or, “You sucker!”)

Woven through the grandmother’s history lesson is an explicit look into how Maria has affected the country: schools are closed, supermarkets are empty and the Marine Act of 1917, known as the Jones Act, a U.S. law that permits only U.S. ships to move goods to and from Puerto Rico, is waived. The young girl asks her grandmother: “Do you think we’ll survive”?

As the film draws to a close, Yaya prays in Taino and tells the young girl that they will—nothing can stop the spirit of “Boricuas.”

I find it repugnant that "America" would find a fifteen minute puppet show the ideal vehicle to once more condemn the "Trump" administration and the American political policies in Puerto Rico. Most readers would not even understand the immensely complicated politics of the Island or give allowance to innocent errors committed by almost everyone in the aftermath of hurricane Maria.
Puerto Rico is one of the largest islands in the Caribbean and in the eyes of everyone living in the Caribbean, the most fortunate, because it has had the good fortune to be the godchild of the USA since the Spanish American War. The common history of the Caribbean is tumultuous, with the "Tainos" being one of several colonizers emanating from the Orinoco basin. The most recent and most vicious were the Caribs, who have the remaining full blooded members living in the island of Dominica. The arrival of Columbus brought successive waves of Spanish, English, French and Dutch all of whom have left their legacy. American incursion was minimal, remaining in Puerto Rico and the US Virgin Islands.
Most people have never suffered through a hurricane, or the consequent damage of their aftermath. Even cities and towns on the American mainland have taken years to recover from the effects of a single storm. Puerto Rico is an over populated, corruptly governed, ill planned, poorly maintained tropical, mountainous island, extremely susceptible to the effects of natural disaster. Their "American" standard of living compounded their dependency upon pipe born water, an electrical grid and cellphone communications. I have known what it is like to run out of propane gas - for over a month, forced to drive miles for gasoline and groceries, and be without electricity for weeks and I live in Florida! How easy would it be to live under worse conditions for months and be isolated, without shelter, because my roof and the bridges or the roads were washed away? There is enough blame to go around for everyone, but the main culprit is the weather.
I was on the first civil airplane to visit the Island of Tobago following Hurricane Flora, which devastated the island in September of 1963. It remains one of the deadliest hurricanes of the 20th century, taking the lives of over 7,000 souls. When we landed I noticed two American C141 aircraft in the parking area. They had come from Roosevelt Roads in Puerto Rico and had restored emergency power to the only hospital on the island within 24 hours after the storm. I saw Tobagonians living in American Army tents, eating American Army rations. I even saw American GI's climbing telephone poles and restoring electricity and telephone lines. It took the Trinidad and Tobago government over two weeks to dispatch one small naval vessel to the island with emergency supplies.
It is easy to compose demeaning essays about events, especially when you have an axe to grind and yes the world is full of problems. In the end it is each one of us that can make a difference for the good and that does not have to be at the expense of walking on each others backs. In the meantime I pray that we all make it safely through another Hurricane season.