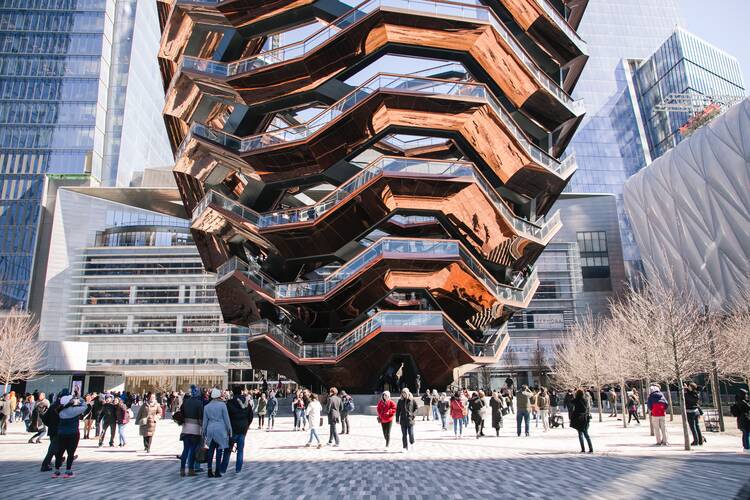 Is this what 21st-century architecture has in store for us? (photo: Evelyn Akhmerov/Unsplash)

In March, Hudson Yards—the most expensive real estate development in the United States—opened its doors. It is a cluster of glass skyscrapers on Manhattan’s West Side that, along with One World Trade Center, are reshaping the New York City skyline. At the center of the residential and commercial complex are two much-anticipated constructions influenced by the space age aesthetic popularized in the mid-20th century.

First is the Shed, a new cultural center with over 170,000 square feet of floor space dedicated to visual and performing arts. The building has an enormous moveable outer shell that can roll away on massive wheels within 15 minutes. The design reminds me of Wall-E or the Mars Rover. Although impressive, the kinetic shell is an architectural gimmick, in which form triumphs over function.

Part sculpture, part landmark, it is unclear what purpose the structure plays in the public sphere.

The Shed’s next-door neighbor is the crown jewel of Hudson Yards: the Vessel. What is this exactly? Part sculpture, part landmark and part never-ending staircase, it is unclear what purpose the structure plays in the public sphere.

I view it as a monument to late capitalism. To get to the structure, I walk past “The Shops.” These are not mom-and-pop storefronts, as the name might suggest, but glass expanses showcasing the most prized desires of the superwealthy: Louis Vuitton, Rolex and Cartier. The exterior is clad in bronze, the high-sheen, reflective, mirror-like quality reminiscent of Chicago’s hugely popular Cloud Gate sculpture, more widely known as “The Bean.” Mirrors often invoke contemplation: Who am I, and what am I doing here? They also make superb backdrops for selfies. This is liminal space in the age of social media.

What does Catholic architecture look like in the 21st century?
Olga Segura

The criss-crossed, lattice-like staircases create a winding route to the top. As visitors to this inverted panopticon, here we exist both to see and be seen: the watcher and the watched. The self in selfie becomes commodified as we broadcast these images on social media. We are the consumer and the consumed. Climbing aimlessly up and down staircases, we repeatedly check the view count on our Instagram story or the number of likes on our post. It’s never enough; there is always more to be had—a vicious cycle like unrestrained capitalism itself.

The effect is chillingly dystopian. It makes one wonder: Is this what 21st-century architecture has in store for us? Fortunately, there are alternatives, even just steps away. Skip the Vessel and go straight past the Shed about 100 yards and you will find the edge of the High Line, a New York attraction that lives up to the hype.

Though I appreciate his efforts, I must differ with Mr. Freeman's experience with "The Vessel", a poorly named but extraordinary structure that was clearly created to showcase the wonderous diversity of God's creatures and the delight of His children in joining with others to explore, experience, and enter into a unique moment together. Though they arrive as strangers, the many hundreds of fellow travelers who climb, dance, meander and traipse across this unique latticework in full view of each other, depart as happy wayfarers who have shared a unique and uplifting experience. The point of The Vessel is not the structure, though it is a magnificent frame, but the PEOPLE who climb it - marveling at life, smiling, laughing, holding each other's hands - and like bees in a hive or swallows in a soaring bank, moving in concert along the structure's ups and downs as they stare out beyond the Hudson at all of America's vastness stretched out before them. No, Mr. Freeman, it is not a monument to capitalism, it is a tribute to light and life, the great aspirations of being human. It is a beautiful thing, The Vessel, because it serves as one of the most successful pedestals ever erected for displaying God's greatest creations as they come fully into the joy of communal delight: His children.