‘Gentleman Jack’ tells the story of a 19th century pioneer 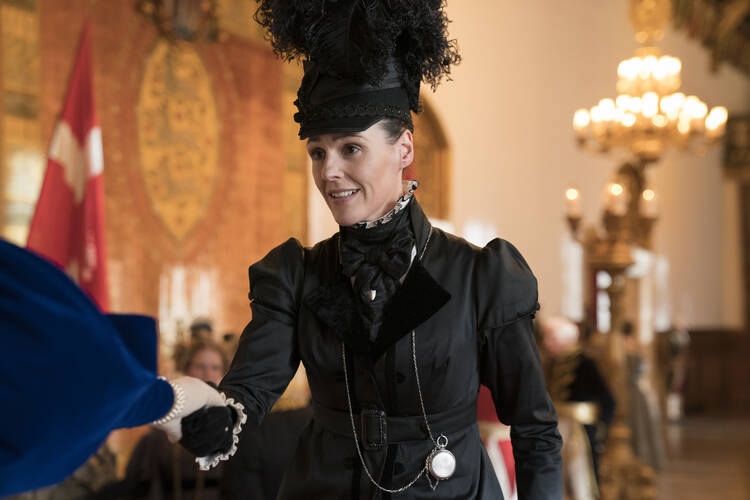 You won’t hear the word “lesbian” in “Gentleman Jack,” the new BBC/HBO series set in West Yorkshire in 1832, which recently concluded an eight-episode run on American and British television (a second season has been ordered). But the show clearly positions its compelling lead character, Anne Lister—a real-life Halifax landowner whose four-million-word diary was discovered in the 1930s—as a pioneer and progenitor, not only of contemporary lesbianism as we know it but of same-sex marriage as well. It is as if the comfy courtship rituals and class struggles of the 19th-century British period genre, from adaptations of Jane Austen to “Downton Abbey,” have been quietly retrofitted to accommodate a gay love story more familiar from our own time.

The British period genre has been quietly retrofitted to accommodate a gay love story more familiar from our own time.

This rich juxtaposition accounts for much of the series’ unique appeal, but also for some of its occasional longueurs. On the plus side, Suranne Jones’s incarnation of Anne Lister is the kind of thrilling, finely wrought lead performance that can make or break a premium cable series, a la Jon Hamm’s Don Draper or Phoebe Waller-Bridge’s Fleabag. Striding vigorously across her family estate in top hat and black suit, or hunkering down to negotiate in man-to-man confidence, Lister cuts a striking, even heroic figure. It is when she turns to wooing a landed neighbor, the younger and frustratingly indecisive Ann Walker (Sophie Rundle), that we see her aching vulnerability and the degree to which Lister’s hard-edged public face is an edifice she has taken considerable pains to construct, at some expense to her heart and soul.

Hers is an unavoidably, and fascinatingly, gendered dilemma: By presenting as both outwardly male and yet irreducibly female, Lister is stranded in a sort of limbo where she must both perform a kind of macho detachment and steeliness, and yet also reckon with her secondary place in the patriarchal social order of the time. Lister tries, with endearingly stubborn willfulness, to simply ignore the strictures placed on her sex and barrel on through to claim what she sees as her due. While this approach has variable success in affairs of land and business, it is a non-starter in affairs of the heart. There she must learn to modulate her bluntness and work in a subtler register to win that other male prerogative: a wife.

As the series builds to its finale, one strand emerges crucially and satisfyingly: that of Anne Lister’s sincere Anglican faith.

But the project of valorizing Lister is often in tension with the series’ other narrative strands, not all of which are kept especially taut. The work of series creator Sally Wainwright, who with “Happy Valley” and “Last Tango in Halifax” showed a vigorous eye for complication and conflict, often feels oddly muted, as if she is constrained by the conventions of period drama, in much the same way Anne Lister felt circumscribed by her era’s conventions.

There are tantalizing glimpses of a gnarlier, grittier vision for the show, as when Lister descends into a coal mine she is setting up and we see coughing, begrimed children employed to work the tight spaces. But this moment, as well as the series’ harrowing opening scene—a carriage accident that leaves a young boy’s leg mangled—is more the exception than the rule. There are subplots about discontented servants and tenant farmers, including an unsettling one about a hushed-up patricide, that might have been grist for a nuanced study of class, patrimony and changing mores in the vein of George Eliot. But the dramatic substance of these subsidiary stories, though all are finely acted and exquisitely designed, feels thin.

‘Brideshead Revisited’ changed my life. Can it work its magic on the ‘Downton Abbey’ generation?
Rob Weinert-Kendt

As the series builds to its finale, though, one strand emerges crucially and satisfyingly: that of Anne Lister’s sincere Anglican faith. She, like many gay people of more recent vintage, saw no contradiction in her sexuality and her religious conviction; she believed that God made her and loved her as she was. It is a recorded fact that on Easter Sunday 1834, she and Ann Walker took communion together at Holy Trinity Church; less reliably documented is the legend that the women secretly exchanged rings when the priest wasn’t looking.

While the series doesn’t depict that bit of apocrypha, it gives this same-sex rite before God its full gravity and mystery. This feels like the most revolutionary gesture in “Gentleman Jack,” and it places Anne Lister in a long line of rebels and dissenters who, by acting and speaking from within tradition rather than rejecting it outright, forever changed it.

I too wished the series would have delved deeper into the economic and class conflicts of Regency England. But it was a fascinating look at a true story about a most unusual person. Small detail: The photo in this article shows Lister being presented to the Queen of Denmark, so her garb is more formal than the top hat and black coat she wore striding around her estate.