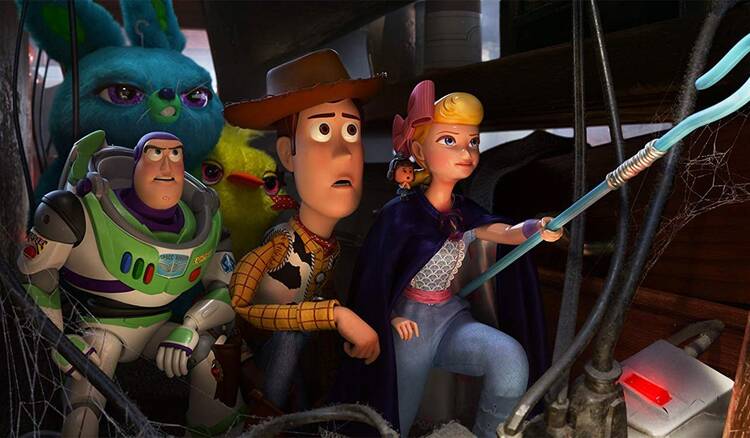 The moment Randy Newman starts croaking “You’ve Got a Friend in Me” at the beginning of the new “Toy Story 4,” anyone who has been an uncloistered parent or a child in the last 25 years will feel immersed in warm and welcome nostalgia. Sequels have become something of a running gag in present-day Hollywood, but no one has ever said no to a new “Toy Story”: You can go alone, or as a family, and feel safe, secure, amused. And even though there’s been that bit of darkness around the edges that has given each movie a noir-ish undertone, you’ll feel you have arrived somewhere familiar. Perhaps even Edenic.

Isn’t that what the entire series has been about? Since 1995, Sheriff Woody (voiced by Tom Hanks) has been longing for the Garden of Andy’s Room as he once knew it. I don’t want to say Woody enjoyed something like white (plastic) male privilege, but he was Andy’s favorite at the outset of the first film and has been the big cheese presumptive ever since. He was tempted by immortality in a Japanese museum and oppressed by Al’s Toy Barn in “Toy Story 2”; he faced a kind of existential limbo as an abused preschool toy in “Toy Story 3.” What’s he’s pined for all along is the paradisiacal existence he once knew, before Andy’s mom committed the Original Sin of buying Buzz Lightyear.

And even though there’s been that bit of darkness around the edges that has given each movie a noir-ish undertone, you’ll feel you have arrived somewhere familiar.

In “Toy Story 4,” the regulars—including Buzz (Tim Allen), Jessie (Joan Cusack), Hamm (John Ratzenberger), Rex (Wallace Shawn) and Mr. Potato Head (the late Don Rickles, reconstructed via voice archive)—all have a new kid: Bonnie (Madeleine McGraw), the preschooler who inherited Andy’s entire collection at the end of the last film. The new addition—there’s always one—is the Frankenstein of playthings: Forky (Tony Hale), a combination of spork, pipe cleaners and googly eyes that a tearful Bonnie makes during her otherwise traumatizing kindergarten orientation. Forky comes home to horrify the rest of the playroom: Not only is he an aesthetic nightmare, he thinks he’s trash and constantly tries to dispose of himself in wastebaskets hither and yon.

It’s the yon that provides the adventures of at least half the film, as Bonnie’s parents take her on an end-of-summer road trip, Forky tries his best to commit suicide, and Woody, taking his usual patriarchal tack, strives to preserve the little guy because he means so much to Bonnie.

Woody’s penchant for self-sacrifice is just one of the aspects that has been recycled for “Toy Story 4” and while you would have to be a Grinch to find any faults in the new film, there are a few, including a tendency toward menace/creepiness that one also found in the third film. There is a bit of prologue that explains why Bo Peep (Annie Potts) never appeared in “Toy Story 3”: She had been given away and lost some years before. Bo was a rather elegant piece of work, being porcelain and collectible, and when the Forky insanity brings Woody near an antique store, he sneaks in on the off chance Bo might be inside. And of course she is (coincidence is no stranger to the “Toy Story” series).

Who else is in there? Gabby Gabby (Christina Hendricks), who, like Woody, is a ’50s-era pull-string toy, but who was made with a defective voice box. Doing her bidding are a quartet of ventriloquist’s dummies who grin and limp and lurch and seem guaranteed to scare small kids and anyone suffering from automatonophobia (i.e., fear of dummies). She wants Woody’s voice box—her “birth defect,” so to speak, has kept her on the shelf and out of the arms of a loving child. What we are into here is the desperation surrounding dreams deferred. What we’ve also wandered into is the realm of organ harvesting, and I for one was a bit perplexed by exactly what debuting feature director Josh Cooley (a Pixar stalwart) and the other writers thought they were doing.

So yes, there are reasons for parents to be a bit wary of “Toy Story 4,” though its principal messages are loyalty, love and redemption. Forky realizes his self-worth. Woody and Bo realize that they are in love (they’ve been flirting since the first film). And there is a conclusion as satisfying as anything in the entire “Toy Story,” series, which we bet will be back, however many years it takes.

Maybe give a credit to the two people who got Toy Story started, John Lasseter and Steve Jobs.