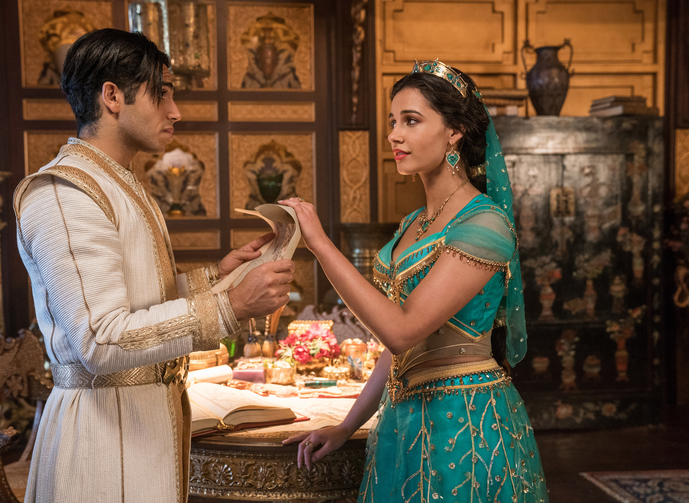 No joke: There was a moment during “Aladdin” when I thought, “This would have made a terrific animated movie.” Then I came to my senses. But the truth is, there is no way Disney can get out of its own way, not while exploiting its back catalog with such ruthless abandon.

This is not to say that the new, live-action version starring Will Smith as the Genie, Naomi Scott as Jasmine and Mena Massoud as the “street rat” of the title, is actively bad. It is too long, and the best parts repeat verbatim the highlights of the animated original—a quasi-classic that very much helped define the Disney Renaissance of the ’90s. (It immediately followed the 1991 masterpiece “Beauty and the Beast” and preceded “The Lion King” of 1994.)

There is no way Disney can get out of its own way, not while exploiting its back catalog with such ruthless abandon.

And before this review goes any further I should make note of one thing: The 6-year-old consultant I brought to this new “Aladdin” was literally on the edge of his seat for the entire film, ignoring most of the Alamo Drafthouse pepperoni pizza before him, and had to be pried out of his seat during the closing credits.

However: If you are not 6, you may have problems. My biggest argument is with the look of the film—a bit cheap, claustrophobically shot and with no visual style or intelligence to speak of. Why choose as your director Guy Ritchie—famous not only for having been Mr. Madonna but for such antic-cum-frantic action films as “Lock, Stock and Two Smoking Barrels” and “Sherlock Holmes”—if it is going to end up being such a visually anodyne affair? The editor James Herbert, as if to take a necessary breath, cuts away regularly from the relentlessly constrained dialogue scenes to the CGI-generated skyscape of Agrabah, the pastel-hued kingdom where our hero and his monkey Abu ply their thievish trade and where the malevolent Jafar is trying to wrest rulership from the Sultan, father of Jasmine, who escapes the “protection” of the palace one day, meets Aladdin and sets the whole thing in motion. The point is, the perspective is largely static, and the effect is slightly suffocating.

Why choose as your director Guy Ritchie—famous for such action films as “Lock, Stock and Two Smoking Barrels”—if it is going to end up being such a visually anodyne affair?

Then there is the star of the film, who is, emphatically and definitely, not Massoud as Aladdin but could have been Scott (“Power Rangers”), who is stunningly beautiful though she sings with a voice one might have heard at theater camp. One of the new songs is the liberation anthem “Speechless,” which is not about being deprived of a voice but getting one. It makes no more sense as I write this than it did last night.

But back to Smith: The star is inhabiting what was perhaps the late Robin Williams’s greatest film role—nothing else the comedian ever did captured his hysterical comic genius so well, unless it was one of his early stand-up routines on “The Tonight Show.” Smith is pure charm, sings well enough (there are no Pavarottis in this thing) and really plays it all rather campily, the Genie’s smoky lower region constant a-swivel and his delivery slightly epicene. It is quite a fascinating approach. But while “Aladdin” does make efforts to put people with actual Middle-Eastern roots in this Middle-Eastern story, having an African-American play an enslaved genie, ultimately for laughs, might just rub the wrong nerve among certain audiences. The 6-year-old didn’t care; I didn’t think about it until later. But it’s there. Someone should have thought twice about it and, knowing Disney, probably did.

‘Tolkien’: a portrait of the artist as a young scholar
John Anderson

Of Eternity and Beyond: Pixar's 'Toy Story 3'
John Anderson

At the same time, the enslavement of the Genie is also the vehicle for the film’s most redeeming message, which is about what one does with power. Jafar uses his, when he gets it, for self-gain and the oppression of others. Aladdin—whom the genie transforms into Prince Ali, thus instigating Jasmine’s romantic interest and one of the better Alan Menken songs in the repertoire (“Prince Ali”)—promises he will use his third wish to set the Genie free. When push comes to shove, though, he has his doubts. So do we. “Aladdin” lards lots of new material on what was probably as close to a perfectly structured film as you are going to find, although at least one addition actually adds something: The Genie is given a love interest in the person of Jasmine’s handmaiden, Dalia (Nasim Pedrad), and that subplot provides the most refreshingly human element in the film. The nonhuman element (Abu) is great; there is also a perfectly charming Magic Carpet. There is just an unfortunate shortage of magic.

Really, John Anderson? That movie was fun! I couldn't find fault with any of the visuals, special effects, music, or dancing! Perhaps, Aladdin could have been a bit more assertive, and Dahlia a bit more hand-maiden-like, but overall it worked very well. And Speechless was a great addition to the repertoire, perfect for the current mood of women's empowerment. And, also, the idea of Jasmine questioning why SHE couldn't be sultan--perfect!

Personally, I think it was a nice movie and well scripted as well. But this article was a little bit harsh and when I read this article I'm speechless. You hostgator renewal coupon shouldn't have said this that they don't have visuals or graphics. Overall it was fun.