When love overcame violence after the Charleston Church shooting 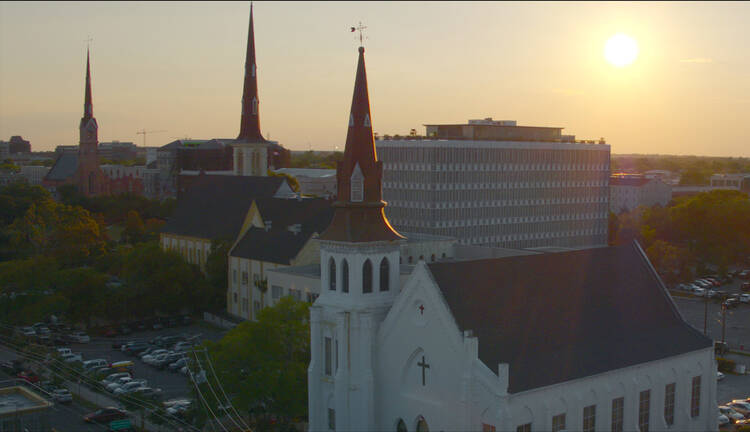 This is a scene from the documentary "Emanuel." (CNS photo/Fathom Events)

Given the frequency and ferocity of gun violence in the United States— and the reflexive urge for vengeance that usually follows—the act of forgiveness became as newsworthy as the murders themselves. Fittingly, the new documentary “Emanuel”—the director Brian Ivie’s examination of Charleston and the murders but mostly the victims’ next of kin—is all about that extraordinary act of love, and about Christian faith.

“It really was my faith that I was able to lean on at that moment,” says one of the film participants, Rose Simmons, whose 74-year-old father, Daniel, was among the dead. “And it’s because as a Christian you’re walking and living and trusting with God every day, [so] when these trials come up against you, you have a bank to withdraw from.

“You can’t wait till you’re in the hard times,” she adds. “You have to have what you need when you get there.”

The act of forgiveness became as newsworthy as the murders themselves.

“Emanuel,” which will be in movie theaters across the country for two nights only (June 17 and 19) is a film that was “founded on prayer, sustained on prayer,” Mr. Ivie said in an interview with America. It establishes the history of black churches from the slave-era South on; examines the spiritual sustenance those churches provided to an oppressed people; and tells the history of Emanuel itself—the oldest A.M.E. (African Methodist Episcopal) church in the country—and of antebellum South Carolina, which was the only majority-black state in the union, a major factor in its being the first to secede.

All of this sets the stage for the horrors of June 17 and what Mr. Ivie calls the divinely inspired moments of June 19. At a bond hearing for the accused killer Dylann Roof, the family members were given the opportunity to speak to him. They used the moment to urge him to find Christ and redeem himself. That the presiding judge, Charleston County Chief Magistrate James Gosnell Jr., even made such a gesture—allowing the families to address Roof at all—was extraordinary.

“That’s what makes the scene even more supernatural and beautiful,” Mr. Ivie said. “And what they each said, individually, is that God took over, and that’s where they found what they wanted to say to the murderer.

"And even though the evil he brought with him was very real, the love was even greater.”

“It seems like a miracle that the film even exists,” said Mr. Ivie, 28, whose earlier feature film was “The Drop Box,” about a pastor who finds an abandoned child and sets up a “drop box” for others. For “Emanuel,” he got an enormous assist from the producer Dimas Salaberrios. (Viola Davis and Stephen Curry are among the executive producers; Mariska Hargitay is a co-producer.)

“Pastor Salaberrios is an African-American and a reverend,” said Mr. Ivie, who is white, “and he conducted many interviews with family members. If they were affected by the murders, and lost a family member, I thought they should walk through that again with someone who understood better than I could. I think it made them feel comfortable, and loved.”

Tanya Coke is the director of the Ford Foundation’s Gender, Racial and Ethnic Justice Team, and previously worked for the N.A.A.C.P.’s capital punishment project. In 2016, she wrote an opinion piece for USA Today, inspired by the Charleston case, in which she expressed a continued opposition to state executions, despite her own sister’s murder two years before—and a degree of awe at the people of Emanuel. “The man who killed my sister was sentenced the day the [Charleston] murders occurred,” she said. “And the next day, the family members stood up and said, ‘We forgive him.’ And it rocked me. I wondered, ‘Would I be capable of that?’”

Mourning in Charleston and Around the Nation
Kevin Clarke

“Emanuel” audiences will be asking themselves the same thing. The question is inescapable, as is the nobility of the people interviewed, who include Nadine Collier, who lost her mother, Ethel Lee Lance; Chicago Cubs prospect Chris Singleton, who lost his mother, Sharonda Coleman-Singleton; the Rev. Anthony Batiste Thompson, who lost his wife, Myra; and Felicia Sanders, who lost her son, Tywanza. And it is also hard not to reach the conclusion that if the family members were to properly honor their slain relatives—who had welcomed Roof into their Bible study the night of the killings (the film contains closed-circuit footage of Roof entering and leaving the church)—then they had to express forgiveness.

“Oh yes, that’s absolutely correct,” says Simmons. “I’m honored and humbled by people speaking to me and saying ‘You guys did a great thing,’ but honestly, we were just mimicking what those nine precious souls were doing. They welcomed that stranger into their midst. And even though the evil he brought with him was very real, the love was even greater.”