Staring at the white Jesus in Dylann Roof’s prison journal 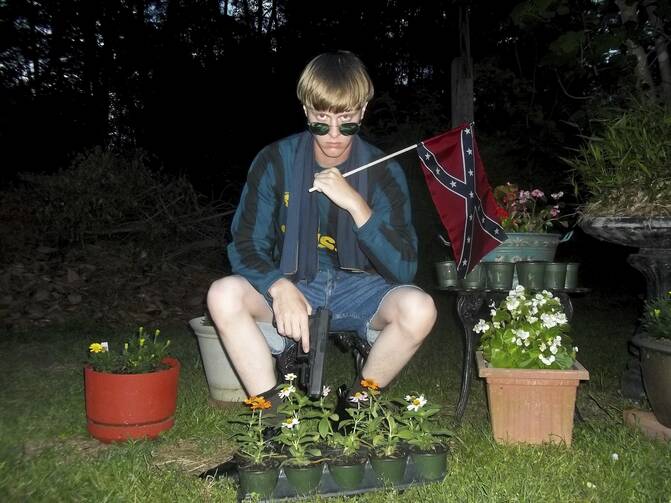 I haven’t heard much from Jesus lately. But today I saw him, sketched in pencil by the hand of a mass murderer.

It’s been a while. I’m not sure who’s fault it is. I still try, sometimes, to reach out. I’m still bringing myself to Mass, still reading the Gospel, still looking the homeless in the eye as I pass by.

He misses you, a friend tells me. Do you miss him back? he asks. I do.

Is this perhaps how some couples feel well into their marriage? Still coming home to one another, going to parties together, making love to each other—but that elusively beautiful feeling of encounter, of honest communication of the whole self—absent?

I remember what it was like when we first met. I was a teenager. I could find you everywhere—in my friend’s laughter, in an elevated host, even in my own suffering and insecurity.

Now I am in a new relationship. I’m falling in love with someone I've known for a long time—experiencing everything that’s wonderful about being let into someone’s life but also feeling the security of being with someone you already know and trust. I remark how peculiar this situation is to my friend.

Maybe that could happen with you and Jesus, too, he says.

And then it happened. I saw you, right on page six of Dylann Roof’s prison journal.

Dylann Roof, who killed 9 church-goers in cold hatred because they were black, who listened to them talk about God’s love and the Bible for an hour before he murdered them, who will be sentenced to either death or life in prison next week, sketched this picture of you that I can’t get out of my head.

Are you talking to Dylann Roof right now? You can’t be, I think. He hasn’t shown any remorse, and he’s asked to stop hearing from his victim’s families, who from the beginning told him he was forgiven.

But I wonder, Dylann. Are there quiet moments, when this picture of Jesus that you drew moves you? And the toll of accepting what you’ve done becomes too much? You wrote to your mother, right before you did what you did, “At this moment, I miss you very much and as childish as it sounds, I wish I was in your arms,” as if to remind us that you were, at least right before you did what you did, human—vulnerable and insecure like the rest of us.

Some have said that your sketch of Jesus, who looks like a norse viking, is evidence of your toxic white supremacy. I’m not sure. Jesus was not white. But he was not Chinese, Mexican or African either. People have always depicted Jesus in their own image, as if an artistic response to his question to Peter, that he asks all of us: “Who do you say that I am?” It looks like you might have copied the drawing based on a prayer card a prison chaplain gave you. I wonder if a prison chaplain visits you. I wonder what you talk about.

And now I’m furious with you, Jesus. How dare you not talk to him. You stare blankly through that notebook, and now through millions of screens, drawn by the hand of a white nationalist terrorist (who is only 15 months younger than I am).

I thought you would do anything for the one lost sheep. Isn’t that what people say? I am tempted to view you as a magician that can break into someone’s life at any time and save them. I still haven’t quite figured out the line between magic and grace and intrusion.

I think of how Dylann Roof spent time shading in the wounds in your hands from the crucifixion. How did he not think of the wounds he’d inflicted? Or of his own? Did you show him?

It’s snowing in Brooklyn. I wake up and I’ve forgotten to charge my phone. So I plug it in and just watch the white powder fall for 10 minutes. I want to see God at work, and for a moment I feel that warm consolation. But I look to my right, at the icon of your face on my wall, and still nothing from you.

I will be patient, I think. I will wait for you to speak. I don’t know how long it will take, or how long I have.

Dylann Roof might be sentenced to death this week.

Zac Davis is an editorial assistant at America.

@zacdayviszdavis@americamedia.org
Show Comments (
4
)
Comments are automatically closed two weeks after an article's initial publication. See our comments policy for more.
Eugene Kleinhans
6 years ago
Stunning and clear, both in your own change of experience (mine too) and what we expect of Jesus - write more, you're good at it
Vincent Gaglione
6 years ago
On a cold and dark Winter night I just came home on a subway car sitting opposite a young man either alcohol or drug addicted, behaving erratically, then stretching out on the seats to go to sleep with little regard for personal space and causing a young black man to move his seat, then lifting his shirt to scratch the exposed parts of his body. I reiterated in my mind my usual repugnance and repulsion toward alcohol and drug addicted individuals. I berated myself for my thoughts and feelings, asking myself if I saw Christ in him. I do not see Christ there, as hard as I look. Then I prayed for forgiveness for my blindness. I remained in my seat the entire time but exceedingly wary of any sudden untoward movement by him until I got off at the penultimate station on the line in the Bronx. I come home and read your thoughts and I feel as if I had experienced an ever so slight sense of what you describe and feel about Dylann Roof. Are we rare birds in this world to react as we do?
Lisa Weber
6 years ago
Dylann Roof is twisted, beset by evil to do what he did. Evil is basically uninteresting as well as uninviting. I leave Dylann Roof to God -
Christian McNamara
6 years ago
You referenced the foregiveness offered by the victims' families notwithstanding Roof's total lack of remorse. That to me is the evidence of God at work.