‘Tolkien’: a portrait of the artist as a young scholar 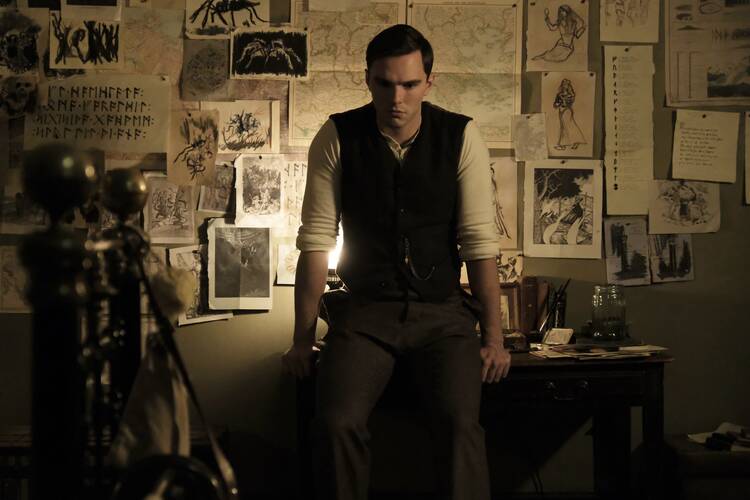 Tolkien is played both convincingly and charmingly by Nicholas Hoult (photo: Fox Searchlight).

“Tolkien,” an impressionistic, mosaical portrait of the author, linguist and literature’s protofantasist J. R. R. Tolkien, will be far less appealing to those seeking a dose of Lord of the Rings or The Hobbit than it will be for fans of such classic British schoolboy novels as Tom Brown’s School Days or David Copperfield—or even A Portrait of the Artist as a Young Man, even though the Tolkien of “Tolkien” is less of an artist than a collection of parts being assembled.

The John Ronald Reuel Tolkien of Dome Karukoski’s film has all the raw ingredients he needs to become J. R. R. Tolkien.

As played both convincingly and charmingly by Nicholas Hoult, the John Ronald Reuel Tolkien of Dome Karukoski’s film has, from the outset, all the raw ingredients he needs—curiosity, passion, determination, erudition and a God-given gift for languages—to become J. R. R. Tolkien, the Oxford don, author and forger of tongues and worlds. He also has the kind of near-Dickensian childhood that is the stuff of a dramatist’s dream.

When the banker father of the family dies in South Africa, the remaining, destitute Tolkiens—Mabel (Laura Donnelly) and her young sons, Ronald and Hilary (Harry Gilby as the young J. R. R. Tolkien)—relocate to grimy Birmingham, where Mom, who also is not long for this world, entrusts her boys’ education to the Rev. Francis Xavier Morgan (Colm Meaney). This brings the teenage Ronald to the distinguished King Edward’s School, where he becomes one of a quartet of high-minded youth who vow to “change the world” through “the power of art.”

That the entire story is a flashback—from the battlefields of World War I, where Tolkien saw action and his friends would die—enshrouds the story in bitter irony: The adventurous boys, who dreamt of quests, would find theirs in the trenches of the Somme.

For the director, Karukoski (“Tom of Finland”), and the writers, David Gleeson and Stephen Beresford, it’s all fodder. The Tolkien-to-be is visited by otherworldly visions and otherworldly creatures, from the dragons that invade his waking dreams to a saddled white stallion that Ronald hallucinates, amid the blood and the mud of the Somme, and which might have been dispatched from Middle Earth.

Tolkien’s identity as a Catholic is a curious thing to leave out of a film so devoted to identifying influences on the author.

“Tolkien” is also a love story, one with some curious omissions. Lily Collins plays Edith Bratt, the future Mrs. Tolkien, who is not only the writer’s intellectual match but a gifted pianist in her own right and who, like Ronald, was not born to privilege. The two are well suited not just temperamentally, but also economically and even musically. Their trip to hear part of Wagner’s Ring Cycle (another obvious influence on Tolkien) is one of the more tender scenes in this sometime romance. Father Morgan, however, discourages the courtship, seeing Edith as a distraction from Ronald’s studies. In real life, the fact that Edith was Anglican was at least as much of an issue.

Tolkien’s identity as a Catholic is a curious thing to leave out of a film so devoted to identifying influences on the author. His mother had been a Catholic convert from the Baptist Church. Tolkien insisted on Edith’s conversion before they married, and he was a major influence on the decision by C. S. Lewis to convert from atheism to the Church of England, though Tolkien found the Christian allegories of the “Narnia” chronicles too obvious. (Tolkien and Lewis were both members of the Oxford discussion group the Inklings.)

The Fellowship of Tolkien and Lewis
The Editors

Still, there are lovely moments in “Tolkien,” the best being about Tolkien’s education, an intellectual up-by-the-bootstraps kind of tale: his silencing of a dismissive professor by reciting Chaucer from memory in perfect Middle English; his epiphany about changing his course of study from “greats” (classics) to philology; and, the most fun, the way he persuades the daunting Oxford professor Joseph Wright (a wonderful, as usual, Derek Jacobi) to allow him into Wright’s already closed classes, partly by speaking to him in Finnish.

“Give me 5,000 words on Gawain,” Wright barks after their initial meeting, and Tolkien, of course, will comply. Like Sir Gawain himself, Tolkien is on a journey, and while the film may deprive us of an arrival, it does give us a rather exhilarating travel itinerary.

Podcasts on Tolkien https://audioboom.com/posts/4420047-the-fellowship-the-literary-lives-of-the-inklings-j-r-r-tolkien-c-s-lewis-philip-caro PART 1 OF 3

Unmentioned is that the Tolkein estate has disavowed the film as not truly representative of JRR Tolkein as they knew him.

"Curious" is a kind way of describing their decision to leave his Catholicism out of the story. I'll be skipping this movie now and I thank John Anderson for saving me the aggravation.