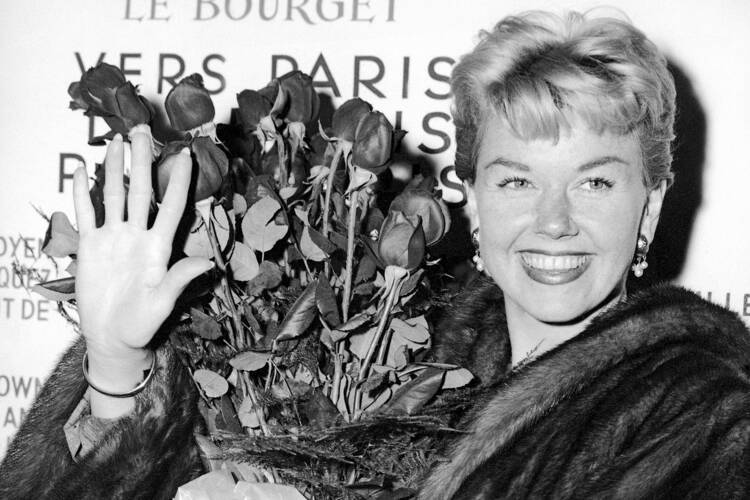 In this April 15, 1955, file photo, American actress and singer Doris Day holds a bouquet of roses at Le Bourget Airport in Paris after flying in from London. (AP Photo, File)

The actress and singer Doris Day died on May 13, 2019, at the age of 97. Below is a review of one of Day's most iconic films, "Pillow Talk," in which she starred opposite Rock Hudson. This article originally appeared in the October 3, 1959, issue of America.

“Pillow Talk” is a romantic farce that is a good deal funnier and more inventive than most comedies.

There is nothing more futile than describing the plot of a comedy, except perhaps trying to explain why it is funny. Anyway, “Pillow Talk” is about a New York career girl (Doris Day) who, sight unseen, takes a passionate and justified dislike to a song writer (Rock Hudson) who shares her party-line phone and apparently spends all his waking hours whispering protestations of undying love over that telephone to a flock of girl friends. The song writer learns by accident that his indignant phone-sharer is the kind of girl he would like to know better. Being fully aware that his real identity will get him nowhere, he wangles an introduction under an assumed name and personality.

“Pillow Talk” is a romantic farce that is a good deal funnier and more inventive than most comedies.

From here on in, the experienced moviegoer should have no trouble filling in details. Does the heroine fall like a ton of bricks for this naive and gentlemanly Texan? Does she learn his true identity at the psychological moment and devise a suitable revenge? Does all end happily none the less, with the hero persuading her that his intentions are honorable? The answer to all three questions of course is: “Yes!”

Why is the picture funny? For one thing, it is written for the screen by Stanley Shapiro and Maurice Richlin from a story by Russell Rouse and Clarence Greene. Also, it is directed by Michael Gordon. The picture has clever dialog, ingenious sight gags and fast, furious, at least faintly plausible plot complications. Moreover, its supporting cast is headed by two very gifted comedians—Tony Randall as a much married but still hopeful millionaire, and Thelma Ritter as the heroine's perennially “hung-over” maid.

For most of its running time the picture has another good quality which is difficult to define precisely but which is essential when there is risqué material. The film is not intended to be realistic—its Technicolor sets and costumes and the economic circumstances of its characters have a never-never-land grandeur, and its plot developments are farcical. Nevertheless, it does try to maintain the proper balance between reality and unreality and to focus its jokes so that they are poking fun at human frailties, not approving of them. In a few instances its success in walking the tightrope between sophistication and offensiveness is less than complete. At one point—when the heroine goes away with the hero for the weekend—its moral tone does a complete about-face, which is not mitigated by the predictable fact that outside circumstances intervene and nothing happens.

As I write this I do not know whether the Legion of Decency will classify the film A-lII or B. Either decision is perfectly understandable, the one stressing that the picture is preponderantly inoffensive for adults and the other that in specific instances it goes overboard. Whatever decision is reached, it seems a pity that at a time when most screen comedy is so feeble, an entertaining comedy should be marred by questionable material.

I'm impressed that in 1959, "America" magazine's film reviewer knew that in a Jesuit (Catholic?) report she was expected to judge the moral content of her subject. Wish it were so today.