Review: In ‘Wild Nights with Emily’ love casts out fear 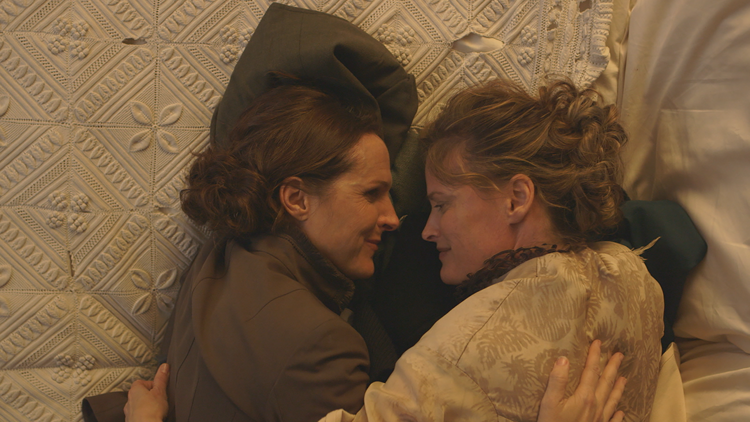 “Perfect love,” writes John, coining one of the most-quoted verses of Sacred Scripture, “casts out fear.”

Perfect love escapes most of us, as most of us are at least a little bit afraid. My list of fears include: air conditioner units falling out of apartment windows onto my head, spiders biting my feet while I sleep and dying alone while choking on a grape. I, like many, respond to fear by avoiding risk; by walking on the far edge of the sidewalk from the apartment buildings, wearing socks to bed and never eating grapes alone.

The recluse or shut-in is often our image of perfect fear. Fear has completely and finally overwhelmed the ability to leave one’s house and enter into the world of risk outside. But risk is the fundamental activity of love.

Risk is the fundamental activity of love.

My first introduction to Emily Dickinson was Michael Bedard’s and Barbara Cooney’s Caldecott-winning picture book Emily, with its reverent watercolors of New England mansions and a wispy “poet-recluse” hovering behind window panes. It was a fairly canonical introduction to the myth of Emily Dickinson:  the legend of a reclusive poet living as prey to fear.

“Wild Nights with Emily” posits the photographic negative of this portrait. In Madeleine Olnek’s irreverent and light-hearted new film, Emily Dickinson (Molly Shannon) is not a poet stunted by fear of living, but an eccentric hermit delighted by the world and delighting in her craft. Shannon plays a confident, quirky Dickinson who is literally overflowing with poetry—she pulls poems out of not only her sleeves, but her apron, hair and skirt—presenting them with childlike delight to her lover, Susan (Susan Ziegler).

“Wild Nights” portrays Dickinson’s development as a poet in comedic counterpoint with a lecture by Mabel Todd (Amy Seimetz), a controversial early editor of Dickinson’s poetry and the paramour of Emily’s brother Austin. In her simpering lecture, Mabel presents to the public the familiar sob story of the spinster-recluse-poet-laureate.

The camera delights in juxtaposing Mabel’s bleak narration with the abundant life pouring out on screen. The small neighborhood of Susan and Emily’s twin houses, side-by-side—one a Victorian gingerbread house of colorful paint and scalloped awnings, the other a simple white fortress, like the poet’s dress, a blank page for a creative mind—crawls with activity. Children are sent around as messengers, lovers scurry back-and-forth in absurd states of undress. The neighborhood children appear under Emily’s window for the fanciful tradition of gingerbread lowered down with laughter in a basket. Emily’s reclusive withdrawals to her chambers are impishly reimagined as necessary escapes from her brother’s tasteless tea-cup-clattering love-making in the parlor. Olnek’s film marches to the beat of Dickinson’s strange poetic rhythms and sense of creative disorder.

Shannon’s Dickinson is jarringly original and utterly rooted in her certainty of who she is and what she writes. Her description of poetry to the overwhelmed Atlantic Monthly editor is boldly idiosyncratic: poetry is what makes her feel like the top of her head is taken off. It makes her body so cold no fire can ever warm her. Dickinson’s lucid expressions render her utterly incomprehensible to the staid masculine literary world.

The film highlights a tension that arises not from the drama of Emily’s life, but the meta-drama of her legacy. Will fear or love triumph in the story we tell of Emily? Mabel Todd presents Emily’s legacy through the lens of fear, as a tragic character whose poetry comes from a place of great lack—the lack of a life lived fully, the lack of life lived in love.

This drama climaxes in the film’s final scene, in which Mabel expunges Susan’s name from Emily’s letters, even as grief-stricken Susan washes Emily’s dead body. Will love eventually wash away fear? Or can fear recast the narrative to exclude love?

Will fear or love triumph in the story we tell of Emily?

Throughout the film, Olnek drives scenes with Dickinson’s own poetry. The final poem she shares offers its own answer to this question: “I died for beauty.”

He questioned softly why I failed?
“For beauty,” I replied.
“And I for truth,—the two are one;
We brethren are,” he said.

Mabel conjectures that growing up next to a graveyard stamped Emily’s mind with unhealthy morbidity, an obsession with death springing out of an over-exposure to loss. But Olnek’s film argues that Emily’s poetry meditates on death because only perfect love can. Only love can look death in the eye and find in it both beauty and truth.

This love of beauty, which casts out fear, even fear of death—that is Emily Dickinson’s legacy.

Correction May 12, 2019: A previous version of this article referred to John the Evangelist as Paul.

Renée Darline Roden, a graduate of the the University of Notre Dame, currently works as an editor for FaithND and as a playwright in New York City. Her writing has appeared in Howlround, Church Life Journal, and Image Journal’s Good Letters.

Emily is an amazing poet. `Your reflection inspires me to share this poem
of my own. I hope you like it.

To Emily Wherever I May Find Her

My dearest Emily
I wake surprised to find
That I, a Catholic man
Have your soul inside my mind

I've never been to Heaven
But I have been to the sea
And O the Wild Nights!
Alive, alive in you and me

Did you wear the white
To symbolize your search?
And would you hear the prayer
Of one raised in the Catholic Church?

Delightful and inspiring on its own!