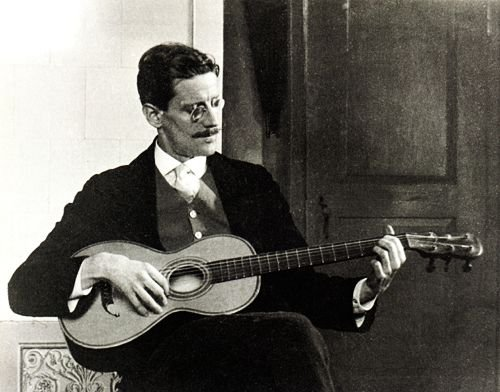 The Irish scribe James Joyce spent thousands of hours with the Jesuits, who educated him as a youth and who figure prominently in his debut novel A Portrait of the Artist as a Young Man, which just saw the 100th anniversary of its initial publication on Dec. 29, 1916. Though Portrait wasn’t exactly a ringing endorsement of his educators, they permanently influenced the author, who once remarked to a friend, “You allude to me as a Catholic. Now for the sake of precision and to get the correct contour on me, you ought to allude to me as a Jesuit.”

The conflicted relationship between Joyce and his Jesuits began on Aug. 30, 1888, when a six-and-a-half-year-old James Joyce began his formal education at Clongowes Wood College, located in County Kildare. Though Clongowes is a prestigious Jesuit school with a longstanding tradition, its main notoriety is its portrayal in Portrait, the first chapter of which sees Joyce’s alter ego, Stephen Dedalus, getting his hands lashed with a “pandybat” by Father Dolan, the punishing prefect of studies, who berates him for malingering when Dedalus claims he cannot do his schoolwork because of his broken eyeglasses.

Feeling that he was punished unfairly, Dedalus visits the Clongowes rector, Father Conmee, to report the incident. A more benevolent figure, Father Conmee existed under the same name in real life and was an actual family friend of the Joyces. Following his tenure at Clongowes, he worked at Dublin’s Jesuit-run Belvedere College and helped Joyce and his brothers obtain scholarships to the institution after their financially irresponsible father had squandered their tuition money.

Joyce, who spent three years at Clongowes, would attend Belvedere for five years. Owing to his high exam scores in English composition, he was recruited by two Dominican priests, who visited the Joyce’s home in an effort to persuade him to transfer to their school. The coveted pupil responded by saying that he “began with the Jesuits and [he wants] to end with them,” according to biographer Richard Ellmann.

Though the rector of Belvedere is never given a specific name in Portrait, he is a significant character who initiates a key scene in Chapter 4, when he talks to Dedalus about becoming a Jesuit. Dedalus listens “in reverent silence now to the priest’s appeal and through the words he heard even more distinctly a voice bidding him approach, offering him secret knowledge and secret power.” The young protagonist admits harboring an attraction to the priesthood, though it may not have been for the purest of reasons: “How often had he seen himself as a priest wielding calmly and humbly the awful power of which angels and saints stood in reverence!”

Becoming a Jesuit was a prospect to which Joyce “undoubtedly gave serious consideration during his own schooldays and for rather longer than the novel might suggest,” writes Bruce Bradley, S.J., in a June 2004 article for The Irish Times. Soon enough, though, Joyce—who graduated from University College Dublin (at that time a Jesuit-run institution) in 1902—split from the church, as he had chosen individualism and literary creation over religious devotion and the restrictions of the priesthood.

Father Bradley, himself a former headmaster at both Belvedere and Clongowes, states in his book James Joyce's Schooldays that Joyce as a writer “had set out to mock and outrage the susceptibilities of his own day. The Jesuits were bound to feel, at the very least, a keen sense of disappointment.”

When Joyce began writing Portrait in 1904, his brother, Stanislaus, wrote of the new endeavor: “He is putting a large number of acquaintances into it, and those Jesuits whom he has known. I don’t think they will like themselves in it.” Eleven years after the book’s publication, Joyce’s friend and contemporary Aron Ettore Schmitz, a.k.a. “Italo Svevo,” said that the Jesuit-trained writer “still feels admiration and gratitude for the care of his educators; whilst his sinister Dedalus cannot find time to say so.”

But even the “sinister” Dedalus shows some degree of respect, with Joyce writing, “His masters, even when they had not attracted him, had seemed to him always intelligent and serious priests, athletic and high-spirited prefects.” And Dedalus’s real-life counterpart credited the Jesuits with teaching him how “to arrange things in such a way that they become easy to survey and to judge.”

Subsequent to Portrait’s success, Joyce’s educators responded to his growing notoriety by giving him the silent treatment. Their famous pupil and onetime Jesuit recruit was becoming known for scandalous apostasy, among other things, as the widely circulated recordings of his “stream of consciousness” ventured far into the gritty and taboo.

Though much has been made of his rebellion against Catholicism, “Joyce never fully left the Church,” states Leo M. Manglaviti, S.J., in an article for the Fall 1999 edition of the James Joyce Quarterly. In the view of his former schools, however, he had strayed more than far enough. By the late 1930s, things had reached the point where Herbert S. Gorman, Joyce’s first biographer, was warned not to mention his subject by name if he wanted to get inside of Clongowes to conduct research.

The school’s magazine, The Clongownian (established four years after Joyce left Clongowes), went the entire first half of the 20th century without mentioning Joyce at all. Even his 1941 death, reported across the world, went unmentioned by both The Clongownian and The Belvederian (also established shortly after Joyce graduated). Neither publication would mention him until the mid-1950s.

In ensuing decades, the Irish Jesuits’ disfavor has diminished. And yet acceptance of Joyce has been neither quick nor unanimous: One longtime Jesuit was prone to grumble about “that heretic” whenever he passed the writer’s portrait on the wall at Clongowes, according to Peter Costello, who wrote a history of the school.

Generally, though, the alma maters have come to accept a maverick alum whose rebellion could never dispel those Jesuits who so influenced his formative years, and whom he generally admired—albeit from a distance.

Ray Cavanaugh is a freelance writer who lives in the Boston. His work has appeared in The Guardian, the National Catholic Reporter and many other publications.

Show Comments (
1
)
Comments are automatically closed two weeks after an article's initial publication. See our comments policy for more.
Henry George
4 years 3 months ago
I grow weary of those who take pride in saying they received a Jesuit but not a Catholic education. Or they attend a Jesuit Church... If you are taught by the Jesuits or attend a Church staffed by the Jesuits, you have received a Catholic Education and attended a Catholic Mass as taught or said by a member of the Society of Jesus.

We Were Brothers
Books
Acquisitions Editor
Jobs
Vice Provost for Digital Learning Initiatives
Education, Jobs
Spirituality in the 21st Century
Conferences
“The Parables of Jesus”, “Essays on the Christian Worldview”, and “Essays on Faith, Culture, Politics and Philosophy”
Books
See all Classifieds

Is there a ‘crisis’ on the U.S.-Mexico border? It’s a tough question to answer.
‘It is a question of perspective. Whose perspective do we adopt when we ask questions like that?’
J.D. Long-GarcíaApril 12, 2021