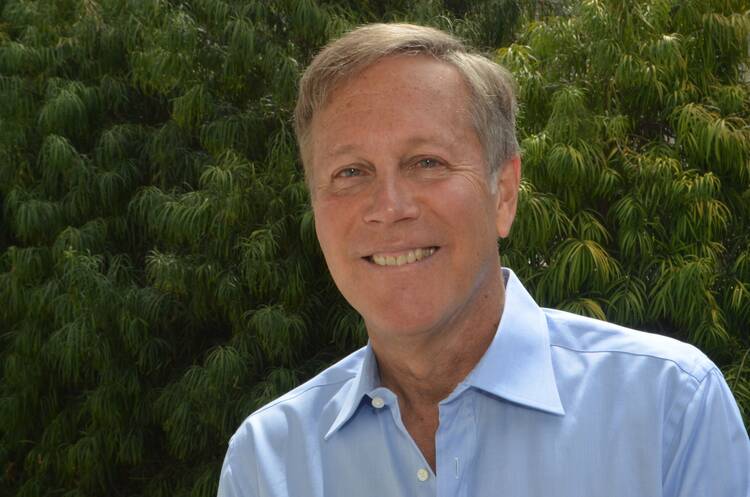 Dana Gioia is a California-based poet, writer, and professor at the University of Southern California. Appointed by former governor Jerry Brown as California Poet Laureate from 2015 to 2018, Mr. Gioia also served as head of the National Endowment for the Arts from 2003 to 2009. An active Catholic, he and his wife have two sons. A former businessman, he has published five poetry collections including Interrogations at Noon (Graywolf Press, 2001), winner of the American Book Award, in addition to various critical works and literary anthologies.

His latest book, The Catholic Writer Today and Other Essays, collects his writings on Christianity, literature and the arts. On April 3, I interviewed Mr. Gioia by telephone about his experiences as a Catholic poet. The following transcript of our conversation has been edited for style, length and clarity.

Bringing poetry into neglected communities reflects a Christian notion of serving others.

Until your office expired with the term of Gov. Jerry Brown, you served from 2015 to 2018 as California Poet Laureate. How does Catholicism inform your poetry?

I was born and raised a Catholic. That shaped my poetry because it’s my worldview. Even when I write about a subject with no overt connection to religion, it’s colored by a Catholic sense of the world and existence. When I became Poet Laureate of California, I decided to take a very communitarian stance. I visited every county in California—all 58—most of which are rural and have little or no public literary life. Bringing poetry into neglected communities reflects a Christian notion of serving others.

You also generate a significant amount of literary criticism and theatrical works. Where does faith surface in your writing?

For years I didn’t think of myself as a Catholic poet—just as a writer who was a Catholic. I didn’t often write about religious subjects. I became more conscious of my own Catholic imagination when I started to write long narrative poems. Stories are about significant actions. They necessarily deal with the moral and spiritual consequences of those actions. I found myself exploring character motivations and questions of behavior in ways that reflected my Catholicism.

As a university professor, how do you treat these moral considerations in your classes?

I came to teaching quite late—I didn’t start teaching at University of Southern California until I was 60. I had spent nearly 40 years in business, government and the arts. I brought broad life experience to the classroom. I spend considerable time looking at the lives of the authors. What were their ethical and religious convictions? How did their personal experiences and commitments play out in their works? But I never try to impose narrow, moral interpretations on art. Poetry is mostly about the joyful discoveries of language and imagination.

Most university teaching of poetry is too intellectual. The best introduction is experiential.

I’m a demanding professor. I make my students write four papers, take midterm and final exams, memorize poetry, attend extracurricular events and learn the meaning of every word in every poem we study. But I also work hard to make each session interesting. Students will work hard if you inspire them. I usually have about 200 people in my “Introduction to Poetry” class. I have to turn people away.

I make the students work hard because poetry is important. Students need to develop their imagination and improve their mastery of language. I also place poetry in the middle of life, not as a merely academic study. I make students memorize and recite, because that is the best way to comprehend the art. Most university teaching of poetry is too intellectual. The best introduction is experiential. That provides a foundation the student and teacher can build on.

What did you learn from your service as head of the National Endowment for the Arts?

I learned how complicated it was to get anything worthwhile done in Washington. I also learned that if you champion positive ideas and build an inclusive political consensus, you can get fine things done.

How do your earlier experiences as a businessman impact your artistic career?

I was the oldest kid in a big working-class family, so I had to be practical about my life. I wanted to be a poet, but for years I had a day job, completely unrelated to my writing. In the corporate world, I learned how to work with people collaboratively—how to create “win-win” situations, how to design projects in ways where everyone participates in the success. This is not how artists typically approach things; many artists create “win-lose” situations by focusing on their individual goals. Business was good preparation in learning how to foster communities.

I wanted to be a poet, but for years I had a day job, completely unrelated to my writing. Business was good preparation in learning how to foster communities.

In what ways does your vocation as a husband and father feed into your work?

For the most part, I don’t write autobiographical poems, though some experiences are so overwhelming, such as the death of my first son many years ago, that they necessarily enter my poetry. What’s behind nearly all of my poems, however, is a vision of life that emphasizes love, family and the complicated realities and responsibilities we all face. I’ve been blessed with a happy marriage. That has helped me greatly as an artist.

What work of yours most illustrates your values?

If you want a single poem that sums up my values, I would suggest the last one in 99 Poems, “Marriage of Many Years.” It is a love poem to my wife, but it is also about language, imagination and mortality.

Can you give us a quote from your writings that illustrates your faith?

Yes, but my sense of Catholicism is neither easy nor sentimental. Here is the opening of a poem called “Prayer at Winter Solstice.” It presents a series of beatitudes about how suffering transforms and redeems us.

Blessed are hunger and thirst, loneliness and all forms of desire.
Blessed is the labor that exhausts us without end.

Blessed are the night and the darkness that blind us.
Blessed is the cold that teaches us to feel.

The poor people who raised me loved poetry. They quoted and recited poems. It was one of life’s pleasures.

What Catholic writers have had the most influence on you?

Beyond the Gospels, one of the most important books in my life is St. Augustine’s City of God. I read it early and have reread parts of it many times. It gave me a sense of the difference between the City of God and the City of Man. That has helped clarify my life. Dante is the poet who most deeply influenced me. Among modern prose writers, I love Flannery O’Connor, Evelyn Waugh, Muriel Spark and Graham Greene. I also love the Italian poet Mario Luzi, a favorite of Pope John Paul II.

As these figures like Flannery O’Connor and Evelyn Waugh recede from popular consciousness, how do you see your role as a Catholic in an increasingly secularized field?

I have tried to help Catholics rediscover the glories of our own tradition. I’ve become more vocal as a Catholic writer over the last ten years because our culture has become more secular and in many cases overtly anti-Catholic. I’ve also tried to build communities for Catholic writers and artists. They feel isolated.

What’s the vocation of poets in our culture today?

The problem is that when people discover a vocation as a poet, they think that necessarily means becoming a creative writing teacher. Poetry has become increasingly disconnected from a spiritual vocation and become too connected to academic institutional careers. We should have poets who come from every walk of life.

If you could say one thing to Pope Francis about Catholics and the arts, what would it be?

Pope Francis understands the purpose of art, but like every priest in the world today, he is so overwhelmed with other responsibilities that it’s difficult for him to support those cultural principles with action. So I would say to the pope: Don’t forget that beauty is one of the ways God speaks to us, a way that leads people to things of the spirit.

What do you hope people will take away from this new collection of your writings?

My new book, The Catholic Writer Today, tries to do a couple things. First I talk about the complicated place Catholicism has in American culture and the importance for Catholic writers to be heard. Second, I explore the power of the Catholic literary tradition. I worked hard to make every page interesting to the intelligent and alert common reader.

People underestimate the power of poetry. I’ve often been told poetry is remote, elitist and unpopular. I’ve never believed this. The poor people who raised me loved poetry. They quoted and recited poems. It was one of life’s pleasures. Poetry’s musicality and expressive power give it an appeal beyond any other literary form. Poetry offers us the most concise, moving and memorable way of articulating our own existence.

Thanks for this lovely Post and for introducing me to Dana Gioia. Also put me in touch with some other websites about prayer that popped up when I was following his poetry.

I'm glad our conversation helped your spiritual journey -- thanks for reading!

Is it possible to be a poet and Catholic? The poet works with nuance and subtlety, and finds purpose in a forest of ambiguities. Is this the Catholic way? Not so for those Catholics who view the faith as a path of easy answers.