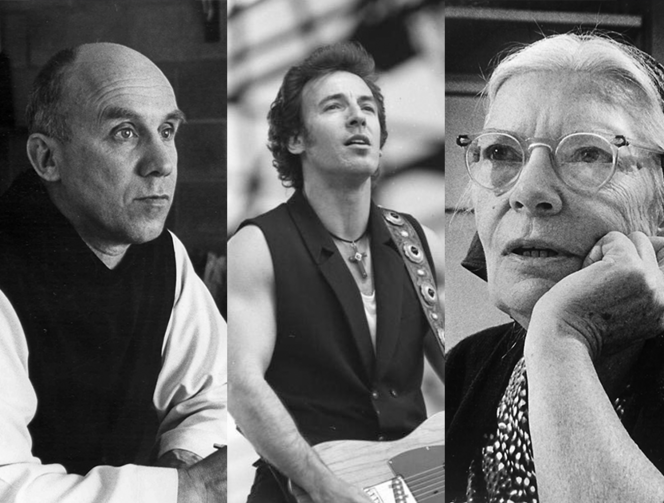 Many America readers may not recall that Robert Mitchum had a younger brother, Chad, who was a Jesuit in formation for about three years in the late 1960s. As a novice he was sent for his “long experiment” to work as a copy boy and sommelier at America House. He happened to be in the lobby on one remarkable day at the “old lodge,” as it was called back then. The people he met and discussed that day would go on to become the subject, object, noun, verb, adjective and adverb in over 100,000 America articles.This is his vibrant, wonderfully detailed, never-before-published account of what happened.

It had rained for nearly three days straight, and it seemed to some of the men in black cassocks throwing severe glances all over the editorial room, trying to put the magazine to bed for the week, that the fiercest downpour began on 55th, ended on 57th and skirted a bare line between 6th and 7th Ave. The rain, in other words, went right after them. It was 1967, a year when rain didn’t seem to fall anywhere without some specific intention.

More precisely, the rain poured down on the Jesuit residence/office called America House. The home of the Jesuit magazine. Legendary, impactful. Scrutinizers of faith and culture, purveyors of the Catholic imagination.

(I had no opinion on the matter—whether Jesuits were specifically targeted by weather. I had been in the order for all of 17 months and took no side. Some of the older guys, though, were certain that something was out to get them. Either way, it seemed that the rain that day swept more than just water into our house.)

The front door opened, and someone whom I later learned was a guitar specialist called “Bruce Springsteen” wandered into the office. He was carrying, well, a guitar. A guitar that, he kept telling everyone, he had not quite learned how to make talk. A gray-haired woman in a gray wool coat was sitting uncomfortably on a throne-like red velvet chair in corner of the lobby. She was patiently reading a book and awaiting the final edits on her story about nuclear proliferation and carrot soup. She looked familiar. For some reason I suddenly wished I was homeless and kind of communist.

He was carrying, well, a guitar. A guitar that, he kept telling everyone, he had not quite learned how to make talk.

“Whatcha reading?” said Mr. Springsteen to the woman. She looked at him and said nothing. The moment was tense. I hoped no one would see me at the “novice desk” just outside the dead-file room, doing copy edits on our lukewarm review of “The Gospel According to Matthew.”

Mr. Springsteen tugged at his unruly beard and looked over her shoulder. “Oh, The Power and the Glory. Graham Greene. Love his work.” She grunted at him and went back to her reading. “In fact, I think I passed him walking by the Carnegie Deli just a few minutes ago,” he said. “Could barely wrap his mouth around one of those corned beef sandwiches. Corned beef. Who wants to put up with that?”

“Thomas, have you finished contemplating all those…seeds,” said the woman. Ahh, it was Thomas Merton! My mind began racing with all the things I wanted to say to him, about his poetry, Seven Storey Mountain, Eastern religions, his stance on war and violence. Instead, I opted for silence. It seemed fitting.

However, no one could tell I was being silent, because I hadn’t been talking in the first place. I would bring this to prayer.

Shann O’Shanley, S.J., our editor-in-chief, rushed down the stairs: “Dot! Tommy! What can I do for you? Who’s the guy with the guitar?”

Dot looked at O’Shanley and rolled her eyes.

“Back in Freehold, that means you’re challenging someone to fight,” said Mr. Springsteen.

“Dot” (Oh, it was Dorothy Day!) turned to the guitarist, her eyes flashing, and said, “Tell Father O’Shanley that I was writing articles down on the Bowery while he was still saying Mass in knickers with retchy beer and cadged biscuits on the green fields of Derry, and I better get to check out a final proof of my essay before it goes to print. These Jebbies have probably never had to slave over a stove making carrot soup for a bunch of homeless drunk men you’re trying like crazy to remember are Jesus.”

“Wow, someone needs to lighten up,” said Mr. Springsteen. “Try reading some Flannery O’Connor. She’s a laugh a minute.” He paused. “Ya know, I think me and ol’ Flannery have some things in common.”

“Used to be Catholic?” replied Dorothy Day. “It’ll never leave you! It will sift like Oklahoma dust through a window frame into every song you ever write, I guarantee.”

“God that’s depressing. I got outta that church while I was young for the church of rock ‘n’ roll.”

“You left, you might say, for the four speakers of rock ‘n’ roll freedom,” said Father Merton.

“Only four? What do you think I’m tryna’ be, Simon and Garfunkel?”

(I just need to break in here from my narrator’s corner where I was scanning for Oxford commas in the paragraph where our reviewer called Matthew’s Gospel “overwritten and shot through with neufargic sentimentality.” I had never heard of the word “neufargic,” but I assumed the reviewer knew what he was talking about. He wore a biretta and had once met Grace Kelly. Anyway, I wanted to interject that I just found all of this completely fascinating. I loved that I was called by God to be a Jesuit and would be spending the rest of my life in this order.)

“You’ll see them! I’ll go right now. Oh, and Thomas, I assume you came to borrow the yoga mat?”

“It was Brother Jim’s before he left the Jesuits to go to that ashram in Miami,” Father O’Shanley explained. He looked, for just a moment, wistful, shot through with neufargic longing for, perhaps, a different life. Then it vanished. He started to go up the stairs.

“Oh, by the way,” he said, over his shoulder, “Graham Greene strolled in here just this morning, with Iris Murdoch. Real doll. The two of them were quite a pair. I suggested they go to the Carnegie Deli to get some—”

“That reminds me,” said Mr. Springsteen. “I just came in here looking for a bathroom. You guys uh—”

Father O’Shanley pointed down the hall.

“Thanks,” he said, walking down the hall. As soon as he opened the door we could hear his voice: “Man, I’m practically blinded by these fluorescent...” then a profound silence.

“I like that young man,” Ms. Day said to Father Merton. “I could see myself going to one of his concerts someday. Catholic artists everywhere. Who knew?”

Outside, the rain kept pouring down. Ms. Day sat back down to her book. “I like that young man,” she said to Father Merton. “I could see myself going to one of his concerts someday. Catholic artists everywhere. Who knew?”

Father Merton looked at his gold watch, saw that she saw the watch and quickly put his hand in his pocket. He sat down. I wondered what else amazing was going to happen. “Tomorrow’s April 2, right?” said Father Merton, apropos of nothing.

Ms. Day nodded her head and pulled a couple of carrots out of her pocket and started peeling them. Thomas closed his eyes, opened his palms and started quietly humming. I was in heaven.

Editor's note: We are grateful to America poetry editor Joseph Hoover, S.J., who discovered this manuscript and edited it for style. 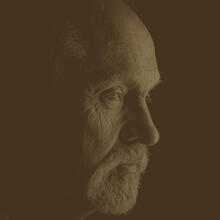 Chad Mitchum is a former Jesuit. He is working on a memoir tentatively titled Preprands.

April 1st a good one!

aaah. Thanks E.Patrick Mosman. I knew it was too good to be true.

It's a true story in my book. Whether it actually happened is something else altogether.

You almost had me falling for it, there at the begInning. Loved it, from the copy boy and sommelier intern to Graham Greene strolling with Iris Murdock, to Ms. Day pulling a couple of carrots out of her pocket... A very fine piece of April foolery indeed!

A true but amazing get together. On Dec 4, 1956 in Memphis, record producer Sam Phillips was trying to find a new hit for one of his singers. Carl Perkins who had one hit but no others. Phillips hired a young backup piano player from Louisiana named Jerry Lee Lewis for the recording. In walks one of Phillips previous singers named Elvis Presley whose contract Phillips sold to NBC the year before. Phillips then calls up one of his other singers, Johnny Cash to come over. The four singers then started singing Gospel music together. Five music hall of fame members in one recording session.