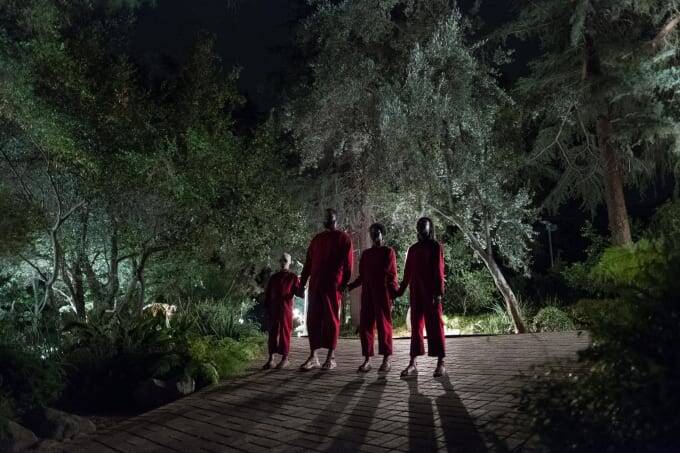 Jordan Peele’s Oscar-winning directorial debut, 2017’s “Get Out,” was as much an exploration of the nature of racism as it was a suspenseful horror flick. Horror with a fairly obvious meaning can hit hard: “The Babadook” is a compelling and elegant fright fest, even once you know that the Babadook is grief. But our fears rarely come with a decoder ring. So it’s terrific to see that Peele’s latest film, the home-invasion horror “Us,” is skillful and strange, opening up subterranean levels in the psyche and letting the creatures within come out to play.

“Us” treads some of the most trampled ground in contemporary horror: 1980s nostalgia; guilt and rage over inequality. But it steps with balletic grace. Though its opening set in the ‘80s works as a “spot the reference” game for horror fans—look, it’s the Santa Cruz funfair where they filmed “The Lost Boys”! Look, it’s a “C.H.U.D.” videocassette, on the shelf right above the Rubik’s cube!—it is also much more than that. The film begins the night little Adelaide (Madison Curry) wanders off while her father is distracted by Whac-a-Mole and finds a strange funhouse on the beach (look, it’s “Big”!) where, inside a hall of mirrors, she finds herself staring at the back of her own reflection. Then the girl in the mirror turns around, a smile knifing across her face….

This gorgeous, haunting sequence—the crashing sea, the little girl alone on the beach with her candy apple shining wet and red, the lightning of a coming storm and the neon lights of the “Vision Quest” funhouse—is a promise to the audience. Despite one minor misstep, Peele delivers on that promise. “Us,” like “The Lost Boys,” has multiple opening sequences, and although the latter is deservedly a classic, “Us” is even richer in its soaring nature shots—which hint at an element of the film’s ending—and its phenomenal original music by Michael Abels, who also composed the music for “Get Out.” Childlike chanting is layered over chiming and pounding percussion in a kind of Afro-“Suspiria” soundtrack, immediately followed by Luniz’s “I Got 5 On It” (a weed anthem about splitting the cost of your drugs—a sharp, fun, meaningful choice) as we shift forward to the present day.

“Us,” is skillful and strange, opening up subterranean levels in the psyche and letting the creatures within come out to play.

Maybe she’s anxious because she knows what waits for her family, in the dark beyond their huge glass windows.

The film’s memorable shots include both comedy and sublimity. We get the low camera angle as Adelaide’s husband Gabe (Winston Duke) sprawls on a bed trying to look as sexually inviting as a bourgeois paterfamilias can. But we also get the high shot from above as the family walks across the white-hot, striated sands, their long black shadows streaming out before them. Those big glass windows are used as part of the film’s violence, and also to fill the movie with reflections, shadows, doubles, twins.

All the possible meanings of “Us” splinter and multiply in the forest of mirrors, and we are left with the images.

There is so much pleasurable fear to be had with “Us” that I hesitate to criticize—or to rummage around for meanings. But there are too many scenes of paternal incompetence, both from the Whac-a-Mole father in the beginning and from Gabe, who repeatedly looks foolish while his wife and kids roll their eyes. This Homer Simpson stuff is unnecessary, especially since the film leans too heavily on unimaginative familial bickering to cut the tension. (Why does the tension need to be cut?) Other than that, even elements that could become problems in less-sure hands, like the explanatory speeches toward the end, become part of the film’s mythos and mystery.

Most of all this is a movie of images and moments. All the possible meanings of “Us” splinter and multiply in the forest of mirrors, and we are left with the images: a ragged sign reading Jeremiah 11:11; a child with his monster mask pushed up on top of his head; a pair of scissors. Those scissors with their twin blades will come together with a snap. Watch for the moment when they change hands.