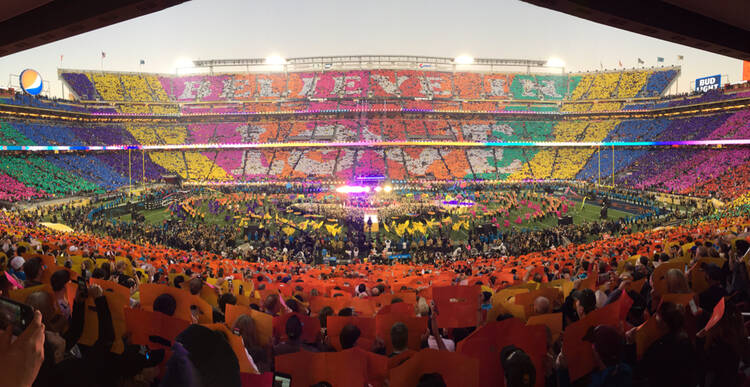 When I was 19 years old, a production company paid me to attend the Super Bowl.

I had seen their online advertisement seeking members for a “field team” who could build and tear down the set for the halftime show. I applied (the screening included questions like “Can you move heavy objects?”) and got the job. My dad joined me.

It was 2016: Super Bowl 50, Santa Clara, Calif., Denver Broncos vs. Carolina Panthers. Headlining the Pepsi-sponsored, 13-minute halftime performance were Coldplay, Beyoncé and Bruno Mars. (Later, the field team rumor mill suggested MC Hammer and Rihanna would make surprise appearances. They did not.) As a tribute to Bay Area history, Coldplay’s floral Technicolor aesthetic made sense, but it could not have been further from the grayscale drudgery of the interminable presidential primaries by then in full swing.

Coldplay’s floral Technicolor aesthetic could not have been further from the grayscale drudgery of the presidential primaries by then in full swing.

On Jan. 20, we gathered in the Santa Clara Convention Center theater for orientation. There were hundreds of us. The production people issued grim warnings about long nights and constant rejiggering, speaking of their old battle scars and travails like crusty generals. Mentions of Prince (halftime ’07) and U2 (’02) elicited wistful sighs from the generals. Katy Perry (’15) and Madonna (’12) had required more props and as a result had been more difficult. No one discussed the infamous Janet Jackson and Justin Timberlake show (’04).

On the first day of rehearsals, we checked in outside the stadium and each received a pastel wristband. We filed past the stadium, toward the practice field, and swarmed a table flush with columns of Papa John’s pizza boxes. We ate on the bleachers, an eclectic group sporting basic GAP sweatshirts and pleated khakis and skinny acid-wash jeans, spiky hair and pompadours, braids and buzz cuts. Some of us were 19; others were pushing 60.

Our generals split us into 30-some teams of about 10 each and assigned every team to a cart. The 30 or so carts were goldenrod fragments of the halftime stage, accoutred with outlets and power cords. On game day, we would have six minutes to roll them onto the field and put the puzzle together, connecting cords and securing wheels and rushing off to form a ring of people around the field. After the show, we would sprint back and disassemble the stage before the third quarter.

They assigned me to Cart No. 15. My fellow team members included three women in their late 20s who were there for Beyoncé and a guy in wraparound sunglasses who always questioned the decisions of the higher-ups. Our cart leader was a dotty man in his 60s or 70s who was constantly checking a clipboard and never seemed to know what was happening. He would tell us to move our heavy cart to the left, only to shout seconds later: “Wait, no, right! Turn right!”

The open-air stadium felt like a scene in a snow globe, simultaneously frozen in time and alive with rapid movement.

From above I imagine all the carts—turning right and left and lining up behind each other—looked like the body segments of a centipede. Sometimes, for no clear reason, we would have to stop and start again. Or we would pause in the middle of the practice field while the generals huddled and whispered.

“Seriously?” I remember the guy in the wraparound sunglasses saying during a long delay. “They’re going to have us wait outside, in the cold, with no direction? I mean, come on, they could at least explain what the hold-up is.”

The Beyoncé girls dared not complain. They were working for the greater glory of Queen Bey. We got better at moving our carts and graduated from the practice field to the stadium, where we rehearsed with the performers: dancers in pale green lamé who hefted oversized flower-shaped batons; a college marching band in pink and yellow; flag runners; extras recruited ahead of time to storm the field at the beginning of the show and act excited. These groups had their own hierarchies, lieutenants and protocols. Every time we had to form the ring around the field, I stood in the Broncos’ end zone.

The generals implored us to keep our cool around the headliners. The first time we rehearsed with the artists, a field team member from another cart screamed so loud I thought she had been smashed by a cart or whacked with a piece of lighting equipment. This was not the case. She had spotted Beyoncé processing onto the field like a Texan Athena, trailed by a modest entourage. During rehearsals, the singer tried a few hairdos and costumes before settling on a long curly style and a black Michael Jackson-inspired leotard with gold sashes that formed an X.

We had brought a little color to TV sets across the country, if only for 13 minutes.

We heard Beyoncé perform her new single “Formation” before the public. My dad reported that at one point, when we formed the ring around the field, he stood in front of Beyoncé’s mother, Tina Knowles, and Jay-Z, who had come down to the sidelines to watch. Stationed in our ring, we grooved to the song in the California cold. The production company took great pains to ensure there were no leaks, banning cell phones and photography.

Once, after rehearsal, the hundreds of field team members were exiting the stadium and ran smack into Beyoncé as she floated past on a chauffeured golf cart. She waved.

The day of the Super Bowl, Feb. 7, 2016, we met off-site and checked in. An armada of buses ferried us to the stadium with a police escort. The security perimeter was full of armored trucks, K-9 units and police from the Department of Homeland Security. Our carts were arrayed in a long line behind the stadium, in a backlot that opened into a hangar-like area, which led onto the field. One cart now carried Coldplay’s drum set. I took a video of the Blue Angels, which flew over the stadium during Lady Gaga’s rendition of the national anthem, leaving behind a series of contrails that resembled music paper.

Turning down ESPN to work in campus ministry
Nick Genovese

The 2018 V.M.A.s, brought to you by Pepsi and angst
Brandon Sanchez

As halftime drew near, the field team hushed. The generals received a two-minute warning. They spoke into headsets and motioned us forward or told us to stop or said to keep going as fast as we could. Paradoxically, the open-air stadium felt like a scene in a snow globe, simultaneously frozen in time and alive with rapid movement. Orange and teal and yellow and red. Just before the show, a Pepsi commercial played on the Jumbotron.

Throughout rehearsals, the production company forbade photography, but on game day they couldn’t possibly discipline anyone—they needed us to strike the set. My team members and I made deals with each other: I’ll take a picture of you on the field if you take one of me. After we put the stage together and retreated into the ring, we snapped photos and recorded videos. When the firecrackers went off, I closed my eyes and regretted that the Super Bowl—the halftime show—had to end.

For weeks the generals had been anxious about a card stunt. One section of Super Bowl attendees would receive cards that they would hold up at the end of the show, forming the gigantic message: BELIEVE IN LOVE. It easily could have gone wrong, but, like the rest of the production, it didn’t. Good for us. We had brought a little color to TV sets across the country, if only for 13 minutes.

It takes the energy of someone with nothing of value to do with his time.

Well done Brandon. I remember that 1/2 time. You all had a great life experience and you wrote about it professionally. Thanks!

I remember that match, my boyfriend took me with him. I don't really like football, but I agreed to go and spend time with him. The only thing I liked that night was Beyoncé's performance. She was in a bucketful dress and sang perfectly. The rest of the evening I talked only about her dress, I really wanted to have something similar in my wardrobe. What was my surprise when a week later my boyfriend gave me a similar outfit. The dress was gorgeous on me and was very bright, I was delighted. Long could not find out where he found it before he split. Now I want to order a dress for our wedding at this store. I am sure that it will be of high quality and beautiful.

This news story talks mostly about the making of a super half time shows. In here The writer written the full set up story in details about the show with his excellent writing skills. As like this news there is a good website for the online casino lovers. By following this https://casinohex.at/video-poker/ website gambler can play the video poker game. In this website casino games player can play different online casino games.