From “Taxi Driver” to “First Reformed,” an interview with Paul Schrader 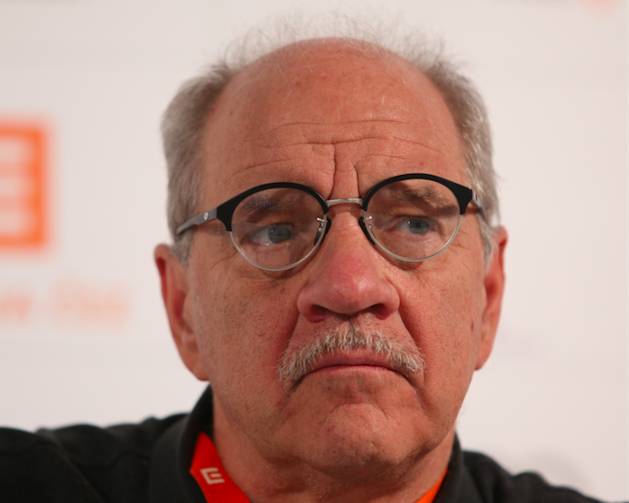 “First Reformed” is a film that only Paul Schrader would make. Frame for frame, no other film is filled with more angst and art that is, uniquely and distinctly, echt Schrader—unless, of course, you go back 43 years. “It doesn’t really matter what I do,” he tells America. “The first line of my obituary will be ‘the writer of Taxi Driver.’”

Schrader admits that he wrote the movie as therapy, not as a commercial venture, but, bizarrely, it was his ticket out of a self-induced hell and into cinema’s front ranks. He wrote the script for the film, released in 1976, at a time when he was suicidal, battling depression and relying heavily on drugs and alcohol. From his internal flailing-about emerged Travis Bickle and a film that not only became his ticket out of a self-induced hell but also influenced generations of filmmakers.

Travis Bickle, the taxi driver of the title, is a Vietnam War veteran living in New York City. He is violently unhinged by the perverts, pimps and teenage prostitutes he encounters daily. In one guise or another, often via Schrader, he has made cinematic rounds ever since, He has been Schrader’s “American Gigolo”; the drug dealer inching toward “a normal life” in “Light Sleeper”; Bob Crane, the “Hogan’s Heroes”star mired in sexual mischief before his murder in “Auto Focus”; the factory workers trying to better their socio-economic status with blackmail and robbery in “Blue Collar.” He is Schrader’s standard-bearer of alienation, hell-bent on self-destruction or suicide, lunging uncertainly toward that objective.

With Schrader, most roads lead to “Taxi Driver”—especially “First Reformed.”

In “First Reformed,” Bickle reemerges as the Reverend Ernst Toller, played by Ethan Hawke with a haunting sense of spiritual hunger and personal loss. In the film, the reverend, who was previously a military chaplain, shoved his son off to serve in Iraq and, when he died, his marriage crumbled. The movie begins with Toller attempting to pick up the pieces of what is left of his life. He is a Presbyterian minister at a small First Reformed Church in upstate New York.

To shore up his ebbing faith and someself-esteem, Toller reads Catholic books—most notably those by Thomas Merton and G. K. Chesterton. “Merton is the Trappist monk for smart Christians, just like T.S. Eliot and C. S. Lewis are writers for smart Christians,” says Schrader of his fellow Columbia University alumnus. “Hopefully, he’ll be made a saint someday. His home base was in Kentucky at The Abbey of Gethsemani. Ethan did two sabbaticals there and knows Merton more than I do.”

Toller, like Bickle, is hiding his psychic disarray, this time under an ankle-length black cassock. Not only is he convinced he is coping with aggressive stomach cancer, but he has also learned from his ecclesiastical superior that a local industrialist, who is the area’s primary polluter, will be involved in the upcoming sestercentennial celebration planned for the church. Even Toller’s tiny congregation, which can barely break into the double digits, gets wind of this. One pregnant parishioner has an unhinged radical environmentalist husband trying to talk her into an abortion instead of bringing a child into this dying planet. When she discovers his suicide vest, she takes it to Toller, who promises to counsel this disturbed eco-activist.

Instead, the husband (spoiler alert) converts Toller to his extreme stance, then commits suicide without the vest and leaves the preacher alone to rectify the situation—“Taxi Driver”-style.

The idea for “First Reformed”began four years ago when the New York Film Critics Circle tapped Schrader to present the Best Foreign Language Film award to Pawel Pawlikowski for “Ida.” Schrader grew up in a strict Calvinist home where movies were seen as sinful—he did not watch a movie until he was 15. His friendship with Pawlikowski allowed him to begin to move away from the idea his religious upbringing had ingrained in him. Walking home after the awards ceremony, Schrader remembers, “I said to myself, ‘You know, it’s time—time to write that script that you promised you would never write: It’s time to do a spiritual film.”

A huge influence on his work has been Robert Bresson, most notably his 1959 French film, “Pickpocket.” Watching the film allowed Schrader to see a place for himself in the film world, adding, “In the petri dish of that ‘Pickpocket’screening fell two seeds. They grew different trees that didn’t meet till ‘Taxi Driver.’”

With Schrader, most roads lead to “Taxi Driver”—especially “First Reformed.” To create his latest, he re-watched two dozen spiritual films he really liked and cherry-picked from the best of them.

“From Bresson’s ‘Diary of a Country Priest,’ I picked the main character, his stomach cancer, the other priest and the motorcycle ride that becomes a bike ride. There’s a journal in Bresson’s ‘Man Escaped,’ ‘Diary’ and ‘Pickpocket.’ I used it in ‘Taxi Driver,’ ‘Light Sleeper’ and, again, here. It’s like advanced feeding: you’re slipping information into the audiences’ bloodstreams without them tasting it.”

“I’m glad that the critics liked ‘First Reformed,’ but, if they didn’t like it, it would still be a great film. That’s what you have to believe."

You might think the film’s closing moments, where the camera swirls dizzily around the two principals, is a steal from Alfred Hitchcock’s “Vertigo,” but “No,” says Schrader, “that’s just a camera move. The spiritual idea of it came from Dreyer’s ‘Ordet.’ That ended with a miracle where a woman is raised from the dead, and her husband’s reaction is one of lust—purely carnal. What holds all of this together is ‘Taxi Driver.’”

“First Reformed”was filmed in 20 days for $3.5 million. “One of the nice things about making films today,” observes Schrader, now seeing his glass as half-full, “is the new technology. When I began in movies, this one would have been 45 days, and 45 days is no longer a responsible financial investment. You don’t even want to try because you know people will lose money and you’ll hurt your career.” He adds, “I can go to an investor and say, ‘Look, at this price point, with this cast, this is about investment’—and I wouldn’t be lying. I can actually believe that now. If I’d said it ten years ago, I would have been lying.”

Because his pictures usually polarize, Schrader is startled by the overwhelmingly positive reactions audiences have had to “First Reformed.” “It has a very nice shelf life,” he contends. “People come back to it. It stays in the mind. It’s not like a movie you see and then a week later you don’t remember whether you saw it or not.”

Critical responses are even sweeter. Currently, it has a 93 percent approval rating from Rotten Tomatoes, the review aggregator. “I’m glad that the critics liked ‘First Reformed,’ but, if they didn’t like it, it would still be a great film. That’s what you have to believe.

“If you get the award or you don’t get the award—that can’t define who you are. I remember Scorsese feeling slighted that he wasn’t nominated for ‘Taxi Driver.’ I said, ‘Marty, if that’s your priority, then you’d better get some new priorities.’”

Those are words that have come back to haunt him with a vengeance. “Now, all of a sudden, we have this little thing called The Award Season, and everybody’s talking to you about it, and you start to think that it’s important. Then you say to yourself, ‘Hey, wait a second, I don’t care about this’—but now I do care about it!” Throughout his career, Schrader won almost 30 awards, many of which, he says, have been “Lifetime Achievement sort of things.”

For one who has written two Best Picture Oscar contenders (“Taxi Driver” and “Raging Bull”), two Oscar-winning performances (for James Coburn and Robert De Niro) and five Oscar-nominated roles (for Nick Nolte, Joe Pesci, Jodie Foster, Cathy Moriarty and De Niro again), there seems to be a bright golden haze on the horizon.

Review: Ethan Hawke is a pastor in distress (and a Catholic in disguise) in ‘First Reformed’
John Anderson

Since its release, “First Reformed” has amassed 40 wins and 62 nominations both here and abroad. In addition to nods from the New York Film Critics, Hawke and Schrader have also received Gotham Awards and nominations for The Film Independent Spirit Awards, which will be announced on Feb. 23, a day before the 91st Academy Awards. Whether or not they make that running, we will all know the morning of Jan. 22 when Oscar nominations are announced.

Unlike most of us, Schrader’s form of teenage rebellion—running off to movies—has brought him success and acclaim in Hollywood, and, in recent years, he has even reacquainted himself with the comforting ritual of Sunday morning church services.

“I don’t know to what degree I’ve ever left the church,” he confesses. “Obviously, when I was in Los Angeles, I wasn’t going to church. When I had kids, we went to the Episcopalian church. Then the kids grew up, and I dropped out again—but then, about three years ago, I switched to Presbyterian, and that’s where I go now.”

The demons that jump-started his career have long since receded and given way to emotional stability. “I’m actually free of the depression,” he is now happy to report, adding with a wry smile, “I’ve managed to give it to all my family members.”

This is one of the best inspiring stories that I have ever read in the movie industry. This films industry very huge and everyone has motivational story share with their movies or even with tv shows. I have watched some inspirations movies like the pursuit of happiness in Latest Apollo TV App and filt very good.