Curses! The Dodgers, the Red Sox and the Irish 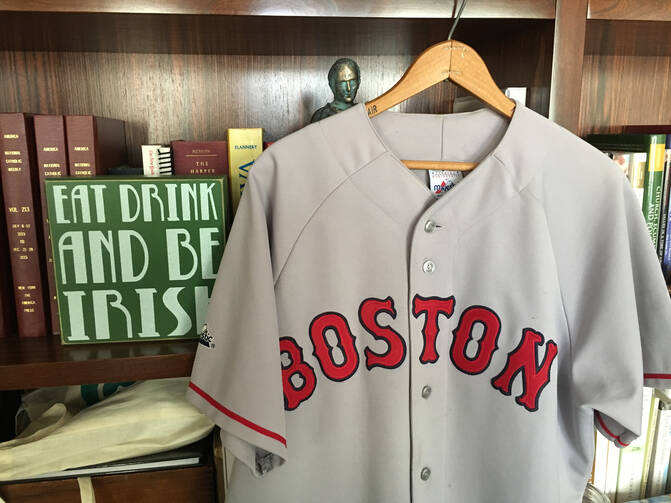 Back in the spring of 2004, when the Boston Red Sox were the unfortunate baseball team with a reputation for falling just a bit short of postseason glory every year, America editor in chief Matt Malone, S.J., told me something that chilled me to the bone. “Being a Red Sox fan is no different from being an Irish Catholic,” he said (we’re both of 100 percent Irish descent). “You enjoy the good times and the triumphs, even though you know in your heart of hearts that some terrible calamity awaits. Because it will never, ever work out in the end.”

We’ve both decided that silence is better than mutual recrimination.

This all happened when Father Malone and I were still speaking, which we certainly aren’t now. The Boston Red Sox are playing my Los Angeles Dodgers in the World Series, and Game One is set for tonight. We’ve both decided that silence is better than mutual recriminations—he threatened to put me on an unpaid leave of absence (not the first time) for the duration of the World Series, and I threatened to release the photo I have of him wearing a red rubber clown nose—but now I find myself the one feeling particularly Irish Catholic.

Why? Because the Boston Red Sox are no longer the benchmark for success followed by calamity: In fact, they’ve won the World Series three times in the past 15 years, forever vanquishing the Curse of the Bambino. But for Los Angeles, it’s been three decades since Kirk Gibson, Orel Hershiser and the 1988 Dodgers brought a baseball championship home—a timespan when even such notoriously cursed franchises as the Chicago Cubs, Chicago White Sox and the loathsome San Francisco Giants all brought home titles. And even the last time the Dodgers faced the Red Sox in the World Series, in 1916 (when the Dodgers were known as the Brooklyn Robins), their championship dreams ran into the aforementioned Bambino, a Red Sox pitcher by the name of Babe Ruth. They lost that series 4-1.

Six years in a row now the Dodgers have won their division, the National League West. In four of those years they’ve advanced to the National League Championship Series. Last year, they won a major-league-best 104 games in the regular season (for anyone who’s counting, that’s 40 games more than the San Francisco Giants) and finally made it back to the World Series—then lost in seven games to Houston.

How much of this can a fan take? Are the Dodgers now baseball’s cursed squad?

How much of this can a fan take? Are the Dodgers now baseball’s cursed squad?

Nope. This year’s team has Clayton Kershaw and Kenley Jansen and Walker Buehler and Max Muncy and Manny Machado and Cody Bellinger—and they’ll end up being just a bit too much for a Red Sox squad that has been on cruise control for months. Things are gonna change, I can feel it. The team from the City of Angels is on the side of the angels this time. Come next week, Irish eyes will be smiling—and not the ones of a certain editor in chief from Beantown.

As an Astros fan, I approve of this message.

As a Cardinals fan -- with two of those three recent Red Sox championships coming at my team's expense -- I very much approve of this. Go Dodgers!

In Alex we trust. For Sweet Caroline and all long-suffering Boston fans, GO SOX.

Having originally hailed from The Bronx, I don't, as Chris Matthews would say, "have a dog in this fight." Reading Father Malone's remark about being Irish Catholic and a Boston Red Sox fan, I couldn't help thinking about a somewhat similar sentiment that was said another sad time. Shortly after President John F. Kennedy's assassination, a Labor Department official by the name of Daniel Patrick Moynihan was walking one day with Mary McGrory of the Washington Post. She bemoaned the fact that "we will never laugh again." Came the classic Moynihan rejoiner: "Oh, heavens, Mary. We'll laugh again. We'll just never be young again." And I think he also said that there was no point “in being Irish if you don’t know that the world is going to break your heart eventually.” For the Irish that’s very true, whether the disappointment be in politics, religion, baseball—or life!