Review: “The Wolf House” explores the traumas of childhood abuse 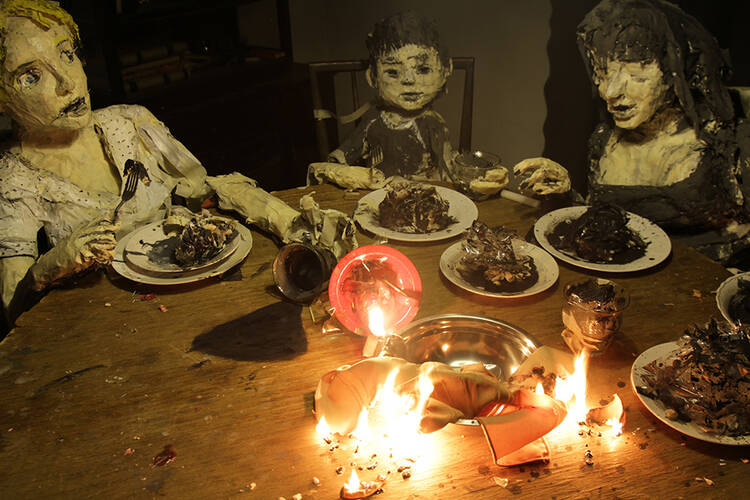 “The Wolf House,” the nightmarish new political horror film from Chilean writer-directors Cristobal León and Joaquín Cociña, starts out like a marketing pitch to a high-end grocery store. A plummy voiceover notes that everybody knows about “the honey of the Colony,” assuring us of its qualities over documentary-style footage of happy farmworkers. But some people have “misconceptions.”

Fortunately, this film is here to clear up any questions we might have about the honey—and about “the Colony” where it is made.

And so begins a haunting stop-motion animation film, like a fairy tale told by cruel parents, in which the real history of an abusive and politically influential cult is cross-pollinated with “The Three Little Pigs,” “Snow White” and “Little Red Riding Hood.” The sets and characters are made mostly of masking tape; the film began as a series of installations in art galleries. Instead of giving the movie a homey, arts-and-crafts feel, however, the constantly unraveling, crumpling and reforming tape makes the film’s world feel horribly unstable. At any moment a hand might detach from an arm and wriggle across the table; facial features might go blank and then reappear in new configurations. A shattered vase might rise up restored—or a new window might suddenly appear on a wall and let in something terrible from the outside. “The Wolf House” won the Caligari Film Prize at the 2018 Berlin International Film Festival, as well as several other awards, honoring both its innovation and its emotional power.

“The Wolf House” is claustrophobic; once we reach the cabin, we never leave it.

The central character is Maria (voiced by Amalia Kassai), a little blonde girl from the Colony who is very disobedient. Her family has to punish her: “You must spend 100 days and 100 nights without talking to anyone, so that you may reflect on what you’ve done.” Maria runs away, into the dark and scary woods—but she finds what seems to be a haven, a cabin that she turns into a cozy home. Maria takes in two pigs; with the magical power of the honey, she turns them into blond human children. But all the while, a wolf is hunting her through the forest. His eyes appear at the windows. His shadow races across the wall. The wolf finds her—and that isn’t the worst part.

“The Wolf House” is claustrophobic; once we reach the cabin, we never leave it. The stop-motion work allows for chilling representations of how trauma feels. Several times, a menaced character stands against a wall and his or her facial features flow off of the masking-tape face and flee across the wall—a feeling familiar to many abuse survivors, who felt as if they left their bodies behind while they were being harmed.

The message of the fairy tale is clear, and it is what survivors fear most: The abuser still controls you, and you will become him because you need him. You cannot survive without him. Maria replicates the world she escaped from, forcibly making the “pigs,” a real-life slur used against Chilean peasants, into perfect Aryan blonds. “The Wolf House” offers the most unhappy ending possible. Maria fails to escape the Colony not only physically but also psychologically. In the end, she begs the wolf to take her back.

The stop-motion work allows for chilling representations of how trauma feels.

The relationship of this central fable to its framing story (the explanation of the origins of the honey) is suggestive, though never quite clear. Why do the Colony’s promoters cast themselves as the Big Bad Wolf? Maybe the wolf’s menace is part of his appeal; perhaps the Colony is banking on our belief that in a hard world, we need a hard man to protect us. There is an audacity in the wolf’s confidence that he can name himself as the fairy tale villain and still command our loyalty. The framing story suggests that the Colony’s honey is a familiar presence on our own shelves: a reminder of an entire society’s complicity in abuse. The wolf is a dictator for a demoralized population who believe themselves not only helpless but guilty, who succumb to the wolf because they have no ground to stand against him.

The film’s “Colony” is a reference to the Colonia Dignidad, a rural community founded in the 1950s by German émigrés. (Both Maria and the wolf speak a mixture of Chilean Spanish and locally accented German, switching between languages to indicate their emotional states.) At its height, the Colony had farms, a hospital, an airstrip—all surrounded by barbed wire, with a watchtower and searchlights. For decades, the Colonia was led by Paul Schäfer, a preacher and child-welfare worker who brought over a community of émigrés from his native Germany after repeated reports that he had sexually abused the children under his care. The Colonia did make its own promotional videos, as shown in the framing story of “The Wolf House.” Several real-life escapees of the Colonia did not succumb to Maria’s fate: Starting in the 1960s, a few members of the group fled and did all they could to expose the abuses taking place under Schäfer, including torture, sexual abuse and the prohibition of any personal or family relationships between members.

But the Colonia’s leadership had ties to the group behind the 1973 military coup that brought Augusto Pinochet to power, and so awareness of its abuses only emerged slowly. In 1991, the National Commission for Truth and Reconciliation named the Colonia as one of the dictatorship’s torture sites. In 1996, Schäfer was charged with child sexual abuse, and after fleeing the country, he was arrested in 2005 and died in prison. Other former leaders of the community have also received prison sentences. There is still a community on the site, under the name of Villa Baviera (Bavarian Village), a resort and tourist attraction.

At a recent screening of “The Wolf House,” León noted that he had not had the Chilean Catholic sexual abuse crisis in mind when he made the film. Earlier this year, all 34 of the country’s bishops, both active and retired, offered their resignations to Pope Francis after the pope decried their “grave defects” in handling abuse cases—and offered his own apology for failing to listen to whistleblowers. Maria could be an abandoned sister of Laura Vicuña, a Chilean girl who died in 1904 and was beatified in 1988 as the patron saint of abuse victims. When she became ill with tuberculosis, Laura offered her own life in exchange for her mother’s freedom from the man who had abused them both. Her mother, Mercedes, did, in fact, leave her abuser.

“The Wolf House” succeeds on every level: as an innovative stop-motion animation film; as a disturbing horror film; as a commentary on Chilean history; and as a meditation on the rationalizations for and trauma of childhood abuse.