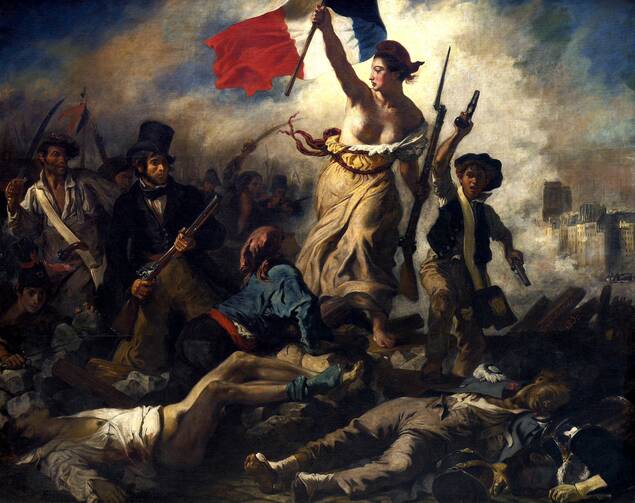 Following an acclaimed exhibition of the great French Romantic painter Eugène Delacroix at the Louvre in Paris, the Metropolitan Museum of Art opened, on Sept. 17, the first full presentation of the artist ever to be held in North America. In luxuriously spacious black galleries, occasionally interrupted by maroon ones, there are nearly 150 paintings, prints, drawings and personal journals, 17 on loan from the Louvre. Delacroix’s work is an intimate part of his native Paris, where one must go to fully experience his work, where large paintings such as “The Barque of Dante” (1822) and “The Death of Sardanapalus” (1827) form part of the very structure of the Louvre. Others, such as “Jacob Wrestling with the Angel” (1854-61), which hangs in the Church of Saint-Sulpice in Paris, cannot leave the city.

Arthur Lovejoy, a philosopher and historian, was famously skeptical of the word “Romanticism,” which he thought “has come to mean so many things that, by itself, it means nothing.” Delacroix had no such qualms. “If by Romanticism,” he wrote, “one means the free manifestation of my personal impressions, my aversion to the models copied in the schools, and my loathing for academic formulas, I must confess that not only am I a Romantic, but I was so at the age of fifteen.”

Delacroix’s work is an intimate part of his native Paris, where large paintings such as “The Barque of Dante” (1822) and “The Death of Sardanapalus” (1827) form part of the very structure of the Louvre.

The Met’s show, organized by its own Asher Miller, together with Sébastien Allard and Côme Fabre of the Louvre, follows a chronological order. The artist was born into a distinguished family in 1798 (although the rumor persists that Napoleon’s chief diplomat, Charles Maurice de Talleyrand-Périgord, was his birth father), orphaned at the age of 16 and impoverished soon after. He managed nevertheless to enroll, in 1815, at the studio of the Neoclassical painter Pierre-Narcisse Guérin, where he became a lifelong friend of the somewhat older Théodore Géricault. His friend’s enormous “Raft of the Medusa” was the sensation of the Salon in 1819 (Delacroix posed for one of the shipwreck’s dying figures), and it was soon Géricault’s romantic bravura that Delacroix adopted in place of Neoclassicism’s ordered lines, polished surfaces and carefully structured compositions.

Convinced that fame would come with acceptance in the annual, state-sponsored salons of contemporary art, Delacroix submitted his “The Barque of Dante” (or “Dante and Virgil in Hell”) in 1822 and, with even greater success, his “The Massacre at Chios” in 1824. The gruesome scene of the latter painting reflected French enthusiasm for the Greek War of Independence from Turkey, and the Met presents an example of that cause in the stirring “Greece on the Ruins of Missolonghi” (1826). Opposite the painting is one of the show’s curatorial coups, “Christ in the Garden of Olives” (1824-26), which was the artist’s first religious commission for the Church of Saint-Paul-Saint-Louis in Paris and an early triumph. The figure of Christ is monumental, with not one but three angels of compassion (none biblical) attending him, his sleeping disciples barely discernible and the arresting crowd dimly but forebodingly in the background.

Although Delacroix did not see himself as a portrait painter, he painted pictures of family and friends, the largest of which, in the show, is a full-length portrait of “Louis-Auguste Schwiter” (1826-27) that shows the influence of the English painters Thomas Lawrence and Richard Parkes Bonington, whom he visited on a trip to London in 1825. Nearby hangs his own most famous self-portrait from about 1837, a commanding view of a man so self-confident as to be almost imperious. (Théophile Silvestre wrote that “Delacroix’s character is violent and sulfurous, but his self-possession is total.”) He eventually bequeathed the painting to his lifelong, devoted housekeeper Jeanne-Marie le Guillou, with the expectation that it would go to the Louvre.

“Liberty Leading the People,” perhaps Delacroix’s most famous painting, depicts an allegorical female figure who raises the French tricolor in one hand and a musket with a bayonet in another.

Delacroix haunted the galleries of the Louvre, captivated especially by the paintings of Peter Paul Rubens and works of Venetian artists. He taught himself to paint human flesh radiantly, evident in the show’s “Female Academy Figure: Seated, Front View (Mademoiselle Rose),” c. 1820-23, and “Portrait of Aspasie,” a multiracial model, of 1824. He became adept at popular, and not infrequently racy, “troubadour paintings,” (historical subjects reconstructed with style and flair), evident in “The Duke of Orléans Showing His Lover” of c. 1825-26. He also became a frequent visitor to the menagerie in the Jardin des Plantes, often with the sculptor Antoine-Louis Barye, where he was fascinated by lions and tigers. The grandest result is a history-painting size showstopper, “Young Tiger Playing with His Mother (Study of Two Tigers)” of 1830. One critic described it as follows: “This unusual artist has never painted a man who looks like a man in the way this tiger looks like a tiger.”

“Liberty Leading the People,” perhaps Delacroix’s most famous painting, depicts an allegorical female figure who raises the French tricolor in one hand and a musket with a bayonet in another as she leads a crowd of revolutionaries over ramparts strewn with dead bodies in the 1830 revolution against Charles X. This painting could not leave the Louvre. (It was, curiously, the only work in which the artist dealt with contemporary French life.) But the Met has other striking examples of his treatment of violent scenes. The exhibition features the enormous “The Battle of Nancy and the Death of Charles the Bold, Duke of Burgundy, January 5, 1477” (1831); the chilling “Murder of the Bishop of Liege” (1829), based, like many of his other works, on a novel by Walter Scott; two vigorous examples of “The Combat of the Giaour and Hassan” (1826 and 1835); and a sketch, from 1826-27, and a reduced replica in oil, from 1845-46, of “The Death of Sardanapalus,” depicting the chaotic death scene of the last Assyrian king. (The full painting measures 13’ by 16’).

The Met’s show climaxes in Galleries 7 and 8, which first introduce the artist’s pivotal visit to Morocco in 1832 and then survey the drama and monumentality of significant paintings from the years 1835 to 1839. After France invaded Algeria, Charles de Morny, the Come de Morny, was sent to negotiate peaceful relations with the sultan of Morocco and invited Delacroix to accompany him. The artist was to spend six months abroad, visiting Tangier and Meknes followed by Seville and Algiers. The color, vibrant costumes and “timelessness” of North Africa, which Delacroix described as “antiquity come alive,” enchanted him. “The Sultan of Morocco and his Entourage” (1845) shows his admiration for the dignity of the sultan. But it was “Women of Algiers in their Apartment,” shown at the Salon of 1834 with its rich colors and unparalleled intimacy from an unknown world, that awakened the larger public to Delacroix’s heightened vision. None of his paintings more obviously validated Paul Cézanne’s later remark, “You can find us all in...Delacroix.”

As for the richness of imagination displayed in the paintings from the late 1830s, the Met contrasts the dramatic “Medea About to Kill Her Children” (1838), hung facing visitors entering Gallery 8, with a monumental, tender “Saint Sebastian Tended by the Holy Women” (1836) on the wall to the left and a stirring “Christ on the Cross” (1835) on the wall to the right. The crucifixion scene, interpreting a Rubens piece from 1620, is unusual: Mary and John are off to the side of the cross, and there is but one thief, and a workman in the foreground gets equal, if not more, attention than the major figures of the drama.

By this time Delacroix was receiving ambitious mural commissions, including one for the king’s audience chamber in the Palais Bourbon. (A decade earlier he was celebrated enough to receive significant requests for lithograph illustrations for classic texts by Goethe and Shakespeare.) Perhaps his most prestigious public commission was for the central panel of the ceiling of the Gallery of Apollo at the Louvre. The Met has two sketches for it, including “Apollo Victorious over the Serpent Python” (1850). They give you a vivid sense of the artist’s luminous accomplishment, melding his work into an already designed and decorated space that measures 26” x 24”.

He kept on pushing his art, but in his way, pictorially inventive but socially somewhat conservative. (In a visit to the great landscapist Camille Corot in 1847, he tells us in his journal: “[Corot] told me to go a little beyond myself.”) For the Salon of 1849, during the Second Republic, he entered a series of ravishing floral studies. (The Met’s “Basket of Flowers,” (c. 1848-49) long unloved, has been superbly refreshed by the remarkable conservator, Charlotte Hale.) And his work from the 1840s on was full of contrasts, overcoming what he had called “the facility of the brush.” During this time, he produced a series of religious paintings remarkable for their ascetic palette: a “Lamentation (Christ at the Tomb)” (1847-48) that evokes both Jusepe de Ribera and Rembrandt; multiple Pietàs; a solitary “Christ at the Column” (1849) based on a Rubens “The Flagellation of Christ” (1617); and a magnificent small “Christ on the Cross” (1846) from the Walters Art Gallery that reduces the scene to its bare minimum.

In 1844 Delacroix had rented a cottage in Champrosay, south of Paris, where he enjoyed his longstanding interest in landscape while continuing to paint seascapes and studies of the sky. “The Shipwreck of Don Juan” in 1840 marked a return to previous themes he explored in the 1820s. He followed this painting with multiple versions of Christ on the Sea of Galilee. The most recent painting in the show, from 1862, is “Shipwreck on the Coast,” which could well have been done by almost any Impressionist. But occupying him above all in the years 1849 to 1861 and leading to his increasingly weakened health was a commission to decorate the Chapel of the Angels in the Church of Saint-Sulpice, the second largest in Paris. There he painted “Saint Michael Defeating the Devil” for the ceiling and, facing each other on opposite walls, “The Expulsion of Heliodorus from the Temple” (1861) and “Jacob Wrestling with the Angel,” his grand synthesis of landscape and figurative art.

The Met’s magnificent show closes with a brief final gallery dedicated to the Exposition Universelle, an international exhibition held in Paris in 1855. As part of his display, Delacroix offered a retrospective of his work—it was a triumph—and painted a final “Lion Hunt,” of which we have only a fragment, due to a fire that destroyed another great Rubens “Lion Hunt.” But it is enough. An oil sketch and an oil replica hung nearby suggest well the full tumultuous tangle of hunters and animals in colors that leap from the canvas. In the gallery, there are also copies of his journals. His last entry, from June 1863, the year of his death, read: “The first merit of a picture is to be a feast for the eye.”

Through January 6 a feast awaits you—one whose equal may not be seen this year.

Update: A previous version of this article stated that of the nearly 150 works of art in the exhibit, 70 are on loan from the Louvre. The correct number is 17.