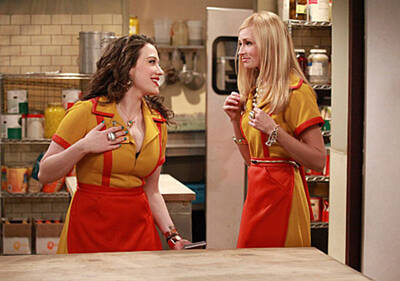 When Marlo Thomas mussed her hair for the first time during the opening credits of “That Girl” in 1966, the gesture marked a shift in how single women were perceived. Since then, stronger gestures have been made, like Mary Tyler Moore’s tossing of the beret. In the nearly 50 years since Thomas’s character, Ann Marie, flew her kite around Central Park, the life of the single woman has been examined on television from all angles. This year Fox and CBS have offered two new shows, New Girl and 2 Broke Girls, that seek entry to the pantheon of the working girl sitcom. While neither show is as cloying and sexist as “That Girl” would seem to audiences today, neither breaks new ground either.

Television since its inception has provided women with a unique voice, and the sitcom in particular has allowed comedy writers and actors an environment in which to tweak societal expectations of what the role of woman should and could be. Shows like “That Girl” and “The Mary Tyler Moore Show,” in all their half-hour, episodic benignity, made clear to a whole generation of young women that they had real-life options, possibilities and potential.

Perhaps most important they depicted a definite place for the feminine outside the domestic sphere. In the sitcom cooler heads prevailed, and no head tended to be cooler than that of the female protagonist. She brought a unique, humanistic perspective that none of her masculine counterparts could offer. It wasn’t just about being rational; it was about the way the female lead understood the dignity of the person. Mary Richards, for example, typically wound up in her conundrums because she was concerned about the well being and dignity of her peers: Ted Baxter was always an idiot, but Mary never forgot that idiots are still people.

It was this gentle morality that made the comedy better. Too often comedy can lapse into the realm of the vicious and cruel or, at the very least, the apathetic. Bringing the feminine into the sitcom forced writers to take higher ground and move beyond irony into the more curative realm of satire.

From TV to Film

In its earliest days television was often the place for “has been” stars to find steady work. Even screen legends like Loretta Young and Doris Day were able to keep the embers burning with a television show long after their box office days had ended. Studio players who had never quite made it to the top, like Lucille Ball and Joan Davis, were finally able to bask in the TV spotlight.

Eventually television became a springboard, the means by which a young actor could develop enough celebrity and name recognition to catapult him or her into the rarified air of film, never needing to return to the plebeian ranks of primetime. This often proved a risky proposition. The danger lay in staying on TV too long, thereby being dismissed by Hollywood as “too television,” therefore unsuitable for films.

Today, however, television stardom has its own cachet, and fluid movement between film and television is not unusual. Television has become a viable option for young actors who have made their reputation and continue to work regularly in film. Two of the stars of “2 Broke Girls” and “New Girl,” Zooey Deschanel and Kat Dennings, are among those ranks.

Deschanel, the sister of “Bones” star Emily Deschanel, hit it out of the park with her performance in 2009’s “500 Days of Summer,” which was both a critical and commercial success, and has positioned herself as one of the most important young actresses of her generation. Dennings had her breakout performance as Catherine Keener’s caustic yet lovable daughter in “The 40-Year-Old Virgin” and followed that up with the well-received “Nick and Nora’s Infinite Playlist” alongside the indie heartthrob Michael Cera. Both chose television series as the means to maintain their career momentum. What makes their choice unusual for budding film starlets is not the unorthodoxy of choosing a television series, but rather the particular series they chose.

“New Girl” is intriguing as a play on the traditional sitcom trope of one woman as the sole voice of reason in a sea of wacky men. In this case, the one woman is just as wacky as her male counterparts. However, the wackiness outside of Deschanel feels contrived, so she is the one who keeps the show from entirely falling into the formulaic with her always surprising choices and emotional availability. There is perhaps no more cringe-inducing label for an actress than “quirky,” and it would indeed be patronizing to tag Deschanel as such (though many already have), so the adjective has yet to be invented for this incredibly deft and hilarious actress.

Still the show is not as funny as it could be; the writers maximize neither Deschanel nor the very funny Max Greenfield, who does a surprisingly sensitive turn on the stock male bimbo (or himbo) role. The show plods at the pace of an hourlong drama (it runs a half hour). While it could be argued that “New Girl” is more of a “dramedy” than a comedy, there is a lack of sentimentality and nothing in the original conceit that would suggest this trajectory. The show is simply not funny enough.

CBS sitcoms have become their own subgenre, shot as they are on soundstages with a multi-camera setup and a laugh track. They are evocative of another era in television and offer their audience a sense of safety and comfort. What is sacrificed at the altar of nostalgia, though, often seems to be innovation and laughs.

“2 Broke Girls” is a CBS sitcom in every sense. The story portrays two 20-something women (Kat Dennings and Beth Behr), one rich, one poor, who are working at a Brooklyn diner now, but hope to open their own cupcake business. They work at the kind of diner that exists only on CBS sitcoms, where every employee is a “character” in the most one-dimensional way possible.

Dennings brings what little humor there is to the show with her acerbic line readings and spot-on timing. But any comedic energy she lobs up is quickly deflated by Behrs, whose lack of comedic skills inhibits her from breathing any life into the archetypal ditzy heiress role. Still, even if played by an actor of considerable ability, Behr’s role could not save “2 Broke Girls” from pedestrian writing and (dare I say it?) sheer “CBS sitcomness.” Some shows, most notably “How I Met Your Mother,” have succeeded in being both funny and inventive despite the antiquated encumbrances placed upon them. “2 Broke Girls,” however, is not one of those shows.

Both “New Girl” and “2 Broke Girls” are soon to be forgotten, for they revisit comedic landscapes that have long been left barren. Neither show takes advantage of what their most successful predecessors did, on “The Tyler Moore Show” and “30 Rock,” for example. Which was to create complicated, interesting and funny protagonists, whose particularly feminine perspective informed and bettered the lives of those around them.