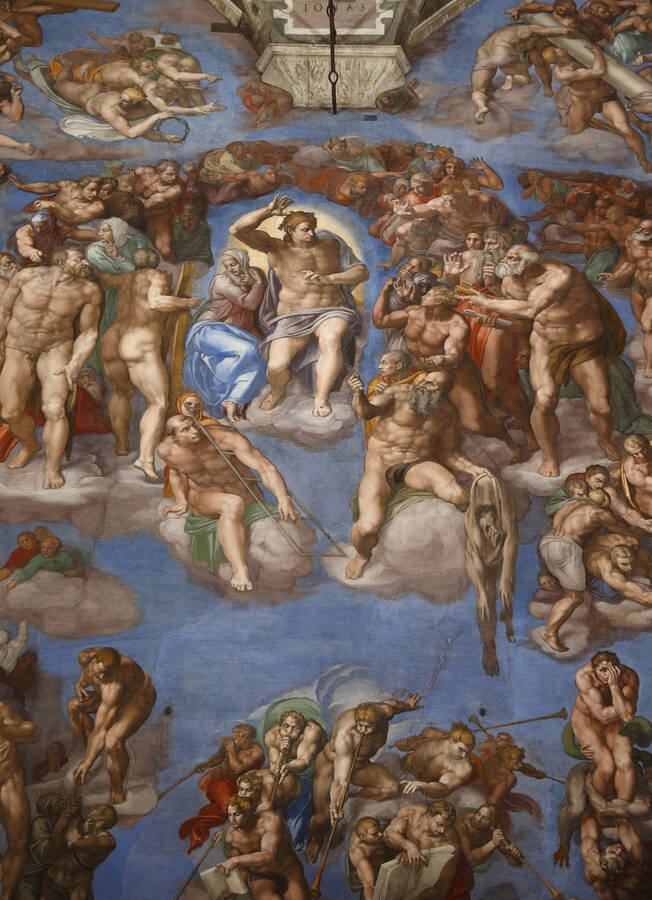 Yet the new exhibit, which is opening in New York on May 10, is neither surprising nor disrespectful. “Heavenly Bodies” is unsurprising because the highly visual culture of Catholicism is a natural influence for all manner of artists, fashion designers not exempted. The show is respectful, not only thanks to the Met’s overall erudition but also because the show’s curators (full disclosure: I briefly consulted for them) were highly sensitive to Catholic sensibilities. No less than Cardinal Gianfranco Ravasi, prefect of the Vatican’s Pontifical Council for Culture, recognized as much when he shared the stage with representatives from the Costume Institute, including Anna Wintour and Andrew Bolton, at the Rome launch of the exhibit. The Vatican also loaned several liturgical items for display in the show. In fact, the only surprise may be why it took the Met so long to arrange the exhibit.

The highly visual culture of Catholicism is a natural influence for all manner of artists, fashion designers not exempted.

The biggest surprise for Catholics may be the author of the introduction to the show’s catalogue: one of the world’s great contemporary theologians, the Rev. David Tracy, professor emeritus of Catholic studies at the University of Chicago and author of the highly influential book The Analogical Imagination: Christian Theology and the Culture of Pluralism. In the following essay, excerpted from the catalogue, Professor Tracy takes one Catholic artist, Michelangelo, and situates him within the larger Catholic artistic imagination.

The history of Catholic theology is a rich and pluralistic one. Some eras give rise to a theological colossus who is singular in achievement: Augustine in the fourth and ﬁfth centuries; Thomas Aquinas in the Middle Ages. Paradoxically, in some periods the leading Catholic thinkers are not the official theologians but rather the great artists. In the 16th and 17th centuries, for example, the most original Catholic theologians were the artists Michelangelo Buonarroti (1475–1564), Raphael, Leonardo da Vinci, Titian, Caravaggio and Bernini.

To be sure, there were many talented, intelligent and erudite Catholic theologians in the 16th century: Thomas Cajetan, Francisco Suárez, Francisco de Vitoria, John of St. Thomas and others. Above all, there were the great mystical theologians John of the Cross, Teresa of Ávila and Ignatius Loyola. However, the outstanding Catholic theological work of that century was Michelangelo’s Sistine Chapel ceiling (ﬁnished in 1512) and its later disruptive companion, his apocalyptic “Last Judgment” (ﬁnished in 1541) on the chapel’s altar wall. He endowed these monumental works with complexity, plurality, synthetic power and a distinctly Catholic theological vision: incarnational, sacramental, metaphorical, analogical.

Michelangelo’s theological vision of salvation is centered, as is all Christianity, on salvation through the event and person of Jesus Christ. His theology was also deeply inﬂuenced by his knowledge of the Old Testament. Hence the predominance of the Old Testament in the nine central panels of the Sistine ceiling: the “Division of Light From Darkness”; the “Creation of the Sun and the Moon”; the “Separation of the Waters”; the “Creation of Adam”; the “Creation of Eve”; the “Fall and the Expulsion”; “Noah’s Sacriﬁce”; the “Flood” and the “Drunkenness of Noah.” Adjacent to these central panels are the famous “Ignudi,” the restless, athletic, male nudes whose presence both highlights the inﬂuence of ancient Greece and Rome on Michelangelo and suggests the uncontainable energy of God the Creator in all creation.

In a dazzling plurality, every space of the ceiling is crowded with biblical images and classical ﬁgures. The corners feature more Old Testament scenes of miraculous salvation, prototypes for the story of Christ: “David and Goliath,” “Judith and Holofernes,” the “Punishment of Haman,” the “Brazen Serpent.” The lunettes and coves depict the ancestors of Christ in brilliant colors; the medallions feature historical scenes from the Books of Maccabees. Dominating the other ﬁgures are Michelangelo’s monumental frescoes pairing seven Old Testament prophets with ﬁve Greek and Roman prophets, the Sibyls. Here the ancients unite to deepen Michelangelo’s Catholic Renaissance theological vision and to convey Christianity’s direct continuity with both Judaism and classical Greek and Roman culture. Michelangelo’s religious-theological vision of Christian salvation was inclusive, not exclusive, both Catholic and catholic. Like most Christians of the period (for example, Martin Luther), Michelangelo interpreted Old Testament ﬁgures as preﬁgurations of New Testament ﬁgures. Christ, for Michelangelo, is implied in his paintings of Adam, Noah, Moses, the prophets and the ancestors of Christ; Eve is a preﬁguration of Mary and the church. Analogies proliferate among the types and prototypes that ﬁll the ceiling.

The Sistine ceiling expresses the central symbols of Catholic Christianity in all their complexity. Its central panels on creation convey a High Renaissance optimism and humanism, reﬂecting on the harmony of nature with grace, although more tragic notes of sin and grace appear in the images of the “Fall” and the “Expulsion of Adam and Eve,” as well as in the frightening, panic-riddled portrait of the “Flood.” Yet in all his scenes of the creation of the universe, Michelangelo’s key to understanding any classic is to follow the history of its reception in diverse cultures and periods or at different moments in one’s life.

For example, a number of Michelangelo’s contemporaries—including some popes, some theologians, a few fellow artists and one major satirist (the annoying Pietro Arentino)—objected to the many nude bodies in Michelangelo’s sculptures and frescoes. Adrian VI (reigned 1522–23) lashed out at the ceiling’s “stew of nudes,” while a later pope, the narrowminded rigorist Paul IV (reigned 1555–59), declared that Michelangelo’s “Last Judgment” belonged in a tavern or brothel, not the papal chapel. The wish to whitewash the whole fresco (fortunately a minority opinion among popes) was impeded by some wise papal advisers and by Michelangelo’s international reputation. But shortly after Michelangelo’s death, yet another pope ordered a minor artist to paint loincloths on as many nudes as possible. Michelangelo’s critics failed to appreciate that the nude was an important aspect of his artistic and theological convictions. Even today, the ability to sculpt or paint the female or male nude body is one of the central ways for an artist to depict the movements, the tensions, the twisted rhythms and thereby the emotions of a distinct human ﬁgure.

Michelangelo’s nudes sprang from an even deeper source. Theologically, a soul cannot be painted as such—it is, after all, invisible—but the soul can be painted or sculpted as it manifests itself in a visible, ensouled body. On this topic as on so many others, Michelangelo had mainline Christian theological tradition behind him. The Gospel of John—the most spiritual, contemplative, even mystical of the four Gospels—begins, “And the Word became ﬂesh and dwelt among us” (John 1:14). Christ became not spirit nor mind but ﬂesh. In his “Last Judgment,” Michelangelo strongly affirms the traditional Christian belief in the resurrection of the body—not simply the immortality of the soul (as in Socrates). The human soul is an embodied soul; the human body is an ensouled body. Rarely has this philosophical (Aristotle) and theological (Thomas Aquinas) belief received so strong an artistic and theological expression as in Michelangelo’s sculptures, frescoes and drawings.

Even more complex to understand than the reception of a classic by a culture or an individual is the mystery of the creation of a classic. I tentatively suggest that the key to any classic’s creation is paradoxical—namely, that the achievement of universality needs the intensiﬁcation of an artist’s deepest particularity. Was any 16th-century artist more insistent on realizing his singular vision than Michelangelo, who famously and ferociously deﬁed his patrons? Yet only through such particularity did his masterworks gain a universality that increases with every passing century.

Michelangelo’s theology is classically Catholic because it is both an analogical theology of creation-incarnation as anticipation of salvation as re-creation (as depicted in the Sistine ceiling) and a profound theology of the cross and of eschatology in the dialectical, sometimes violent imagery that saturates his “Last Judgment.” These two monumental frescoes exist together somewhat uneasily in the same space, theologically clashing even as they complement each other. Christianity cannot in fact be understood if one ignores the beauty and goodness in all creation or the tragic elements of suffering, evil and sin in all life. That is the Catholic analogical imagination. 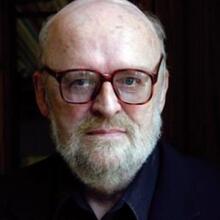 Rev. David Tracy is professor emeritus of Catholic studies at the University of Chicago and author of The Analogical Imagination: Christian Theology and the Culture of Pluralism.

I want more of this; it's beautiful!

Catholic art thus far has been heavily influenced by the patriarchal culture and ecclesiastical patriarchy. Eve under God's arm in "The Creation of Adam" is practically invisible. Now we need more art that conveys that the church is "one, holy, catholic, and apostolic," but not necessarily patriarchal. We need to see Christosophia!

What is the point of this article? Is it put together and published tongue in cheek? The juxtapositions with Galliano, Versace, D&G, appear random and irrelevant. How do they relate to the text?

Is this article merely a ‘cultural studies’ stunt, or is there some other purpose?