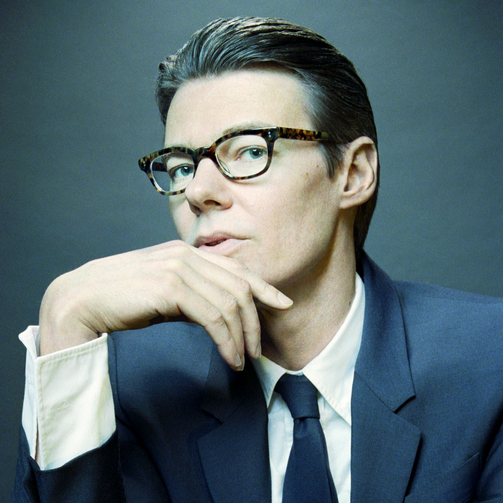 Andrew Bolton, the Wendy Yu Curator in Charge of the Costume Institute of the Metropolitan Museum of Art, spearheaded the Met’s new show, “Heavenly Bodies: Fashion and the Catholic Imagination,” which looks at how religion and religious art have influenced fashion designers. The show opens on May 10.

Mr. Bolton was interviewed on May 2, by James Martin, S.J., the editor at large of America (who also consulted on the show). This interview has been edited for clarity.

Can you tell us a little bit about your own faith background?

Well, I was raised Catholic and went to Catholic school. My parents were very devout Catholics, and when I was 16, I went to a grammar school, St. Mary’s Sixth Form College [at Stonyhurst], which was run by the Jesuits. St. Mary’s College was a grammar school for what you would call your “A-levels,” basically, from 16 to 18. This was in Lancashire, in northern England, in a town called Blackburn.

Did your own faith influence the genesis of this show? Was that part of your thinking or your desires for the show?

Yes, very much. Having been raised Catholic and still being a believer, you are always conscious of designers who use Catholic imagery, iconography or symbolism in their work. That is something I’ve been very conscious of for a long time.

As I began working on the show, it was clear that most designers gravitated more to Catholic imagery.

Originally, this show was five religions: Islam, Buddhism, Hinduism, Judaism and Catholicism. The idea was similar to what we are doing with Catholicism—to display fashion inspired by those belief systems in galleries in the museum that are devoted to those belief systems. But as I began working on the show, it was clear that most designers gravitated more to Catholic imagery. Most designers that I was looking at were Western: Italian, French, some English. So there was an imbalance between the dresses and garments inspired by Catholicism and the other four religions. They made the others seem quite “tokenesque” and the imbalance may have been read in a particular way.

That was what made me decide to focus more on Catholicism than the other five religions. That being said, growing up Catholic, you are very conscious when a designer co-opts or employs Catholic imagery in their work.

Do you think you’ll go back to the other religions for other shows in the future?

I think both: partly religious art but also partly religious beliefs and Catholic practices—the holy sacraments and also sacramentals. Certainly, initially when you walk through the exhibition, you’ll see that the designers really have looked to Catholic imagery for inspiration—but also the vestments of the clergy as well as of the different religious orders.

But what became more interesting to me as a curator was the fact that most of the designers in the show were raised Catholic. What fascinated me was having a great many who no longer practice. But having been raised Catholic or being educated Catholic, I was interested in how that impacted their creative development, their creative impulses and their imaginations.

That is what the show is really about: Having been raised Catholic, how has that affected your creative development?

That’s really what the show is more about—which is very much inspired by David Tracy’s work and Andrew Greeley’s work. Having been raised Catholic, designers gravitate toward a narrative approach to their work and, particularly, metaphor. Even when you look at their work beyond Catholic imagery, they still imbue their work with narrative and metaphor.

So to me, that is what the show is really about: Having been raised Catholic, how has that affected your creative development?

What do you think a Catholic and a non-Catholic might take away from this show?

Again, this is really channeling Hans Urs von Balthasar and Pope Benedict, where they talk about beauty. That is what transcends the believer and the non-believer—the beauty. Not just in the fashion but also in the religious art that is creating these juxtapositions and conversations.

So it is looking at how, yes, one’s faith, but also one’s perception of beauty, imbues one’s work—sometimes it is not traditionally beautiful, it’s far from that. But it is about these garments having this incredible affecting presence on the viewer, often through aesthetics.So beauty can be a bridge between a believer and a non-believer.

Has curating this show and working so closely with these works of art—the dresses and the fashion and the fine arts—influenced your faith at all?

Yes, I am still a believer and devout. I do not go to church, but I pray every day, and I’ve got a very personal relationship with God. So it is certainly solidified that and also made me re-read Catholic doctrine again.

My belief is sort of very immature. It is not terribly sophisticated. It is the sort of belief or faith of an adolescent in a way. And I never really delved deeply into Catholic doctrine. So it is a very child-like approach.

So, in actual fact, working on the show has really made me delve deeper into Catholic doctrine and helped me be just a bit more sophisticated and grown up about my beliefs.

Father Martin will be interviewing Mr. Bolton live at the Sheen Center in New York on May 21.