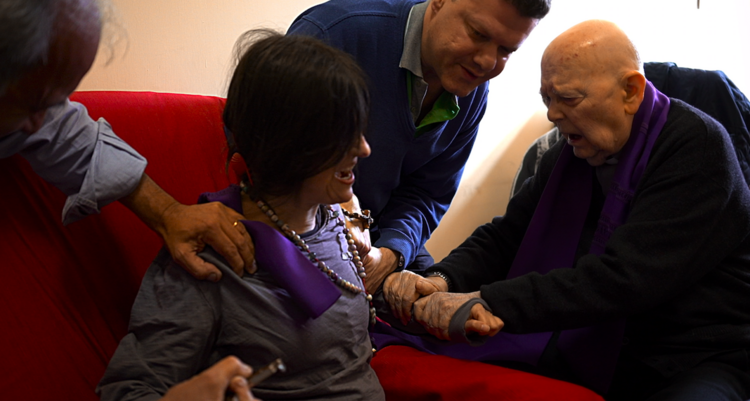 “There are more things in heaven and earth than are dreamt of in your philosophy,” says Robert Emmet Barron, auxiliary bishop of the Archdiocese of Los Angeles and a theological diplomat responding to a thorny question. While the bishop is quoting “Hamlet,” he is addressing…exorcism. His interrogator? William Friedkin, the film director who long ago put the controversial rite on the pop-cultural map and whose latest, the documentary “The Devil and Father Amorth,” returns to the same sulphurous territory he first explored in “The Exorcist.”

It has been 45 years since that Oscar-winning movie began traumatizing people and, in so doing, relegated a sacramental ritual to the catalog of horror-movie conventions. But while Friedkin has certainly not lost his taste for the sensational—some of the film’s overheated, tabloid-TV techniques and Christopher Rouse’s music are strictly unnerving—a viewer would not be entirely wrong to detect some degree of penitence on the part of the famed director (“The French Connection,” “To Live and Die in L.A.”), the man who dispatched the fictional Father Merrin (Max von Sydow) to save the possessed Regan MacNeil (Linda Blair) back in 1973.

In “The Devil and Father Amorth,” William Friedkin turns to reality.

The real-life case of possession that lay behind the film, and William Peter Blatty’s best-selling novel of 1971, involved Father William Bowdern, a Jesuit who, in 1949 Georgetown, was involved in the exorcism of a 14-year-old boy. It was the real deal, Bowdern told Blatty, after the author sought him out for research on the novel. (Blatty, who died in 2017, appears via interviews done in 2010 and 1998; Bowdern died in 1983.) Blatty, who had first heard of the case while a student at Georgetown University, had long wanted to do a nonfiction book about it. He considered the project “apostolic work.” (“What a tremendous reaffirmation of faith that would be,” he remembers thinking). But the family of the boy had been promised confidentiality and would not relinquish it, so Blatty turned the true case into fiction.

In “The Devil and Father Amorth,” Friedkin turns back to reality. His title character, Father Gabriele Amorth, was a Paulist priest who for 31 years (until his death in 2016) was an official exorcist of the diocese of Rome. He allowed Friedkin an extraordinary privilege: the opportunity to film an actual exorcism in Father Amorth’s offices. The subject was a woman named Cristina (a pseudonym) who was undergoing her ninth exorcism; Friedkin had to come alone and use only his small camera, and he was afforded no additional lighting.

There is no hissing, smoke or disembodied voices when Father Amorth sprinkles holy water on the stricken Cristina.

There is no hissing, smoke or disembodied voices when Father Amorth sprinkles holy water on the stricken Cristina—and the fact that I was surprised by that says something about my pop-cultural programming. But Cristina does growl and writhe and convulse. It takes three sizable men, in addition to Father Amorth, to control her as the priest performs the exorcism. For all the self-generating hype in the film, it is an extraordinary thing to watch.

So is the followup: Armed with the recording of Cristina’s ordeal, Friedkin visits medical specialists, neurologists and neurosurgeons, including the distinguished Neil Martin at U.C.L.A. and Itzhak Fried of the Tel Aviv Medical Center. While not one is willing, or able, to confirm a case of satanic possession, none will deny it either. Cristina’s faith may be involved with her symptoms, some say, but that does not it make it less real for her, or for anyone else—even the circumspect Bishop Barron (“the natural has to be eliminated before we move on to the supernatural”), who has a very funny moment with the curious Friedkin. “What if I started crawling up the walls or slithering around the carpet like a snake?” Friedkin asks. “What would you do?” To which the prelate answers: “Call the police.”

“The Exorcist,” as a work of art, fostered an understanding of Catholic theology.
Gavin F. Hurley

Seriously, though, the bishop says that when all scientific explanations have been exhausted, one has to consider the demonic alternative. “I should be open to that if it manifests itself,” he says. In agreement, surely, would be Father Amorth, an impish man who celebrated his 91st birthday by exorcising Cristina and who literally—you can see him do it in the movie—thumbed his nose at the devil.

I have seen this documentary on my Android mobile. Its really fantastic depiction of exorcism. This documentary is now available for free on your Android and iOS devices using Terrarium TV