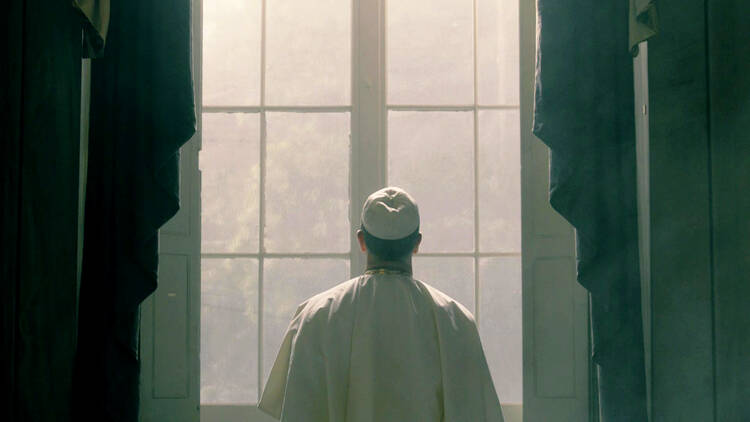 Quite a few readers of America will know more going in than they will get from “Pope: The Most Powerful Man in History.” But the intent isn’t to woo scholars and theologians but rather an audience less familiar with history’s 266 pontiffs, the scope of their power, their various peccadilloes and the peculiarities of papal history. What’s the problem? That the creators of the program didn’t think their utterly fascinating subject was going to be quite fascinating enough.

The six-part part series, which will play Sunday nights at 10 starting March 11, is subdivided into some novel plots of papal territory. Episode 1—predictably enough—is titled “The Rise of the Pope,” an origin story covering Jesus’ commission of St. Peter as his institutional rock; the perceived threat to Rome of early Christian sects; their own internecine warfare; Constantine’s embrace of the faith, the Council of Nicaea, Constantinople, the sacking of Rome, the Crusades and the origins of an East-West schism that persists in various ways today. A commentator draws a parallel to the attacks of Sept. 11, 2001; another is made to Pope Francis, whose various gestures of outreach to the Muslim world are seen as attempts to remedy, among other things, the 1,000-year-old sins of Urban II.

“Pope,” with appropriately sober narration from Liam Neeson, does a terrific job of making all papal history clear and concise.

In Episode 2, matters get considerably more ornate, beginning as they do with the resignation of Pope Benedict XVI—only the fourth pope to resign and the only one in which the pontiff went peacefully. Who were the others? The first was another Benedict, the youngest pope ever, the only one to ever actually sell the papacy and the son of wealthy Romans whose placement in the Holy See was strictly for purposes of familial enrichment. Benedict IX was, shall we say, ill-suited to the task. And apparently shameless.

“Nepotism tended to produce a group of wealthy parasites who lived like grandees,” says one commentator; any modern parallels can be left to the viewers of “Pope.” But Benedict IX did usher in a period of administrative chaos unequaled in papal history. Eventually driven from the throne and replaced by Sylvester III, he managed to later regain power—at which point there were two popes with at least semi-legitimate claims to the office. “Then the really scandalous thing happened,” someone says, which at this point sounds like it might be a laugh line: Benedict decided he wanted to marry, surrendered the post to Gregory VI, had another change of heart and at this point there were three popes. All were deposed, and the church ended up with Clement II.

Benedict IX ushered in a period of administrative chaos unequaled in papal history.

The point of this breathless recitation is that “Pope,” with appropriately sober narration from Liam Neeson and a cast of charming, erudite commentators, does a terrific job of making all this history clear and concise. At the same time, the show belongs to the attention-deficit school of nonfiction TV, its style being one ubiquitous to cable news and quasi-news stations. There is a near-constant thrum of drumbeats, portentous orchestrations and reenactments that border on the comically undernourished. The information being imparted—by the likes of religious historian Elaine Pagels, the ecclesiastical historian Diarmaid MacCulloch, religion scholar Anthea Butler of the University of Pennsylvania and medievalist Susan Wise Bauer of the College of William and Mary—is solid stuff. They provide information and competent analysis. But the editing is frantic, the sound unrelenting, and “Pope” seems constantly afraid you are going to leave the room. Which you might, if only to grab an aspirin.

The academics are terrific, though, and in fact go above and beyond the call when it comes to either comparative history or examining the papacy as a historical continuum. Cambridge University’s Eamon Duffy, for instance, declares Benedict XVI’s retirement a “devastating comment” on the last five or six years of his predecessor’s papacy, because Pope John Paul II, despite his obvious enfeeblement, refused to surrender the chair. As several commentators then observe, what Benedict did with his voluntary abdication was change the nature of the papacy, allowing his successors—including, perhaps, Francis—to retire at a less ripe old age. The result will be an office less like that of a medieval pope, says Ms. Bauer, and “more like a C.E.O.”

The popes of old are certainly colorful. Sometimes they seem like blackguards.

The popes of old, whose departures were often marked by rancor, warfare and political upheavals, are certainly colorful. Sometimes they seem like blackguards. But “Pope” isn’t really in it for the Borgias and the sex. Episode 4 (“Revolution: A Church Divided”), for instance, may be of particular interest to America’s readership, dealing as it does with Martin Luther, Charles V, the baroque nature of the English Reformation and the international ramifications of Henry VIII’s libido. And a dramatic reversal in the church’s fortunes.

“In the face of spiritual revolutionaries and power-hungry monarchs,” says Mr. Neeson, “the once almighty pope sees the power of the office dwindle for the first time in 800 years.” By the middle of the 16th century, he says, it looks like the reign of the Roman Catholic Church is finally coming to an end. However: “Just at the moment when the church seemed in real trouble, a particular champion came along,” says Mr. MacCulloch. “Called himself Ignatius.”

Five years into Pope Francis’ papacy, there is much more noise to be made.
The Editors

While St. Ignatius Loyola’s concepts, among them a personal relationship with God and meditative prayer, largely mirrored Luther’s, he and his fellows at the University of Paris—the Jesuits, as they would come to be known—posed no threat to the church. They ushered in reforms that were not only embraced by many Catholics but by the “great reforming pope” Paul III himself. They protected their independence, Mr. MacCulloch notes with some irony, largely by emphasizing their loyalty to the pontiff. And their great cause—universal education—reinforced Catholicism in areas where Protestantism had made inroads and in the New World, Asia and Africa.

The reforms “set the stage,” Mr. Neeson says (in something of an abrupt leap) for the election of Pope Francis, the first Jesuit to hold the office and perhaps “the greatest reformer in the modern era.” The historical, theological and traditional ironies of Francis’ papacy (“A Jesuit was the last person you’d ever think would become pope,” as Ms. Butler plainly puts it) are not lost on “Pope,” which is certainly noisy but never less than smart.

The apologetic segment on Islam at the end was an incredible double standard. Can you imagine if the situation were reversed and Muslims today were being made to wait for a Christian or Jewish doorkeeper to let them into one of their most sacred holy sites. What a scandal that would be, but CNN makes it seem as if those kindly Muslims were just stepping in to make sure Christians don't trample on the rights of nonbelievers in their quest for global domination. No need to mention the fact that Islam was and remains a religion of empire that is determined to rule the world through conquest - whether violent or peaceful, and once Muslims have a hold on power, they don't let go willingly, because they see it as their duty and right to control things - just like the Muslim guy with the key to the church.