Five years into Pope Francis’ papacy, there is much more noise to be made. 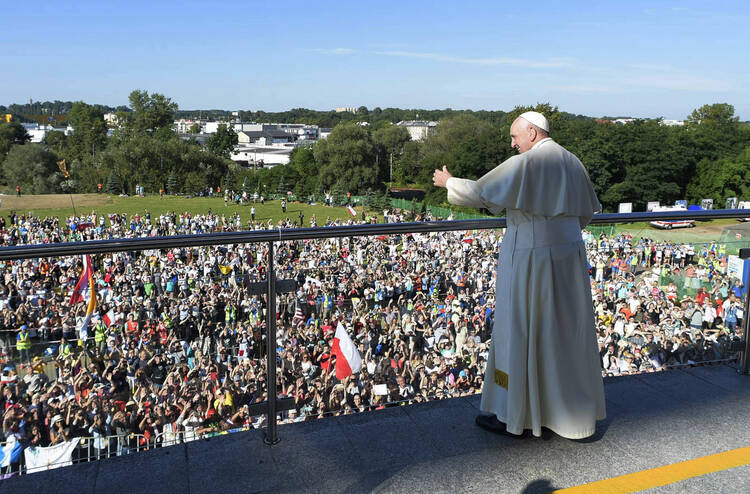 Three years ago this March, Pope Francis made a startling observation during an interview with the Mexican media company Televisa: “I have the sense that my pontificate will be brief: four or five years.” Since two years had already passed since his election on March 13, 2013, Francis’ offhand remark seemed to put an unexpectedly short timeline on his papacy.

We now mark five years of Francis’ pontificate. The editors of America wish him many more. “Hagan lio,” he told a crowd of millions at World Youth Day in Rio de Janeiro in 2013, “Make some noise,” and there is no question that this pontificate has done just that.

Jorge Bergoglio’s own experiences in Jesuit ministries and as archbishop of Buenos Aires clearly molded him to be an outspoken pope of the poor, the marginalized and the victims of a throwaway culture. He has bluntly rejected the wealth and trappings of his office, and the simple gestures that have accompanied this conviction will be the enduring symbols of his pontificate. Francis has intensified his predecessor Benedict XVI’s strong condemnations of war, an unfettered market and growing economic disparity; he has also offered a blunt but welcome prophetic voice of correction to international leaders, including President Trump.

Jorge Bergoglio’s own experiences in Jesuit ministries and as archbishop of Buenos Aires clearly molded him to be an outspoken pope of the poor, the marginalized and the victims of a throwaway culture.

In five years, Francis has produced three landmark documents. First came his apostolic exhortation “The Joy of the Gospel” (“Evangelii Gaudium,” 2013), in which he sketched out his vision of a church whose strengths and resources should “be suitably channeled for the evangelization of today’s world rather than for her self-preservation” (No. 27). It was followed soon after by “Laudato Si’.” While widely received as a call for environmental protections and a critique of consumerism, the encyclical is also one of the most important social justice encyclicals in history. “Everything is related,” Pope Francis wrote. We cannot affirm the rights of humanity while denying the dignity of our environmental home; we cannot abort or euthanize or marginalize unwanted humans as if they were trash; and we cannot trash the planet in the pursuit of wealth or ease or misbegotten notions of freedom.

More controversial was Francis’ post-synodal exhortation on the family, “The Joy of Love” (“Amoris Laetitia,” 2016). That exhortation, which looked at a broad range of topics related to human love, also opened up the possibility for those who are divorced and remarried to return to the sacraments under certain conditions. That pastoral concession has drawn the loudest cries: affirmations from many living and ministering in difficult pastoral situations and vigorous criticism from those who charge that the pope is contradicting the doctrine of the church.

A quieter but more dramatic shift is the new emphasis in “Amoris Laetitia” on the authority of the local bishop in the pastoral application of universal church law. Critics of this devolution of authority say that it will result in the church teaching in one town what is not taught in another, which is contrary to the universality of the church. But this criticism confuses universality with uniformity, an error against which Francis has been outspoken. Respect for the authority of local structures in the church will help us to regain a sense of the ecclesiology of communion while also respecting cultural differences.

Francis’ post-synodal exhortation on the family opened up the possibility for those who are divorced and remarried to return to the sacraments.

Such hopeful lights make the shadows of this pontificate all the more disappointing. None has been more painful than Francis’ uneven response to sexual abuse in the church, precisely because those who have been abused by clergy are some of the most obvious victims of the throwaway culture Francis condemns. The pope recently appointed new members to the Pontifical Commission for the Protection of Minors he created in 2014, including lay representatives, hopefully giving the commission new life after repeated complaints from previous members that some Vatican officials were refusing to cooperate with the commission. Worse is the ongoing crisis of the church in Chile, where Francis defended a bishop accused of failing to report sexual abuse despite substantial evidence of wrongdoing, going so far as to accuse the bishop’s accusers of slander. While Francis has since apologized for his insensitivity and dispatched a high-ranking official to investigate the claims, the damage to already wounded hearts and to the pope’s credibility was great.

Vatican reform has also foundered despite Francis’ appointment in 2013 of a council of cardinals tasked with overhauling the Vatican Curia. Little public progress has been made to cure the Vatican’s sclerotic culture, and much in the Vatican’s operations remains as opaque as ever. Ecclesia semper reformanda est. A church newly open to mission must be a church that listens to voices it has ignored in the past to its great detriment, first and foremost those of women.

How do you rate Pope Francis’ handling of sex abuse in the church?
Our readers

Looking Back: The Election of Pope Francis
James Martin, S.J.

On the level of diplomacy and ecclesiology, recent weeks have brought new signs of hope for the Catholic Church in China. Francis has continued the delicate and frustrating work of engagement with the Chinese government to normalize the church’s life in that nation. Controversial but pragmatic moves toward a policy of jointly appointing bishops with the government have raised the possibility of reaching a long-desired goal: a united Catholic Church in China for the first time in 70 years. Matteo Ricci, S.J. would be proud.

This litany of lights and shadows speaks to a larger matter: the personal goal that Francis seems to have set for his papacy. His critics are certainly right about one thing: He does indeed seek “to change the church,” not in its essentials, but in its orientation to the contemporary world. The church is “not a catalog of prohibitions” to be enforced, Pope Benedict XVI reminded us, nor is it an elite club for the saved. We must not forget that the church is her mission. As Pope Francis said before the conclave in which he was elected, the church must go out of itself to proclaim fully the invitation to join in Christ’s mission of salvation and redemption. Five years into this groundbreaking papacy, there is much more noise to be made.

What is most important about our Pope Francis is his Holinesse's effort to lead our church back to a church that is based on mercy and love and NOT on self-perfection. Only a church that so thoroughly shows the Love Divine of Jesus can attract all who desire Jesus to communion and reconcialiation. Because of this Pope Francis is opposed by all who consider themselves their own Pope because they have ceased to dedicate themselves to the True Christ and True Mary.

I note that you are very quick to judge those who oppose Francis as not dedicating themselves to Christ and Mary. And who are you to judge, sir? What gives you the right, the arrogance, the unbridled conceit to judge the faith of anyone but especially one opposed to this man? I wonder if, like the scribes and pharisee- the hypocrites, you owe devotion to the Jesuit/man, Francis, and not to the Christ he is supposed to represent. Surely not, I pray!! (A question: would acceptance of a sculpture of Jesus nailed to a swastika be any more or less blasphemous then Jesus nailed to a hammer and sickle?) Love and mercy are but a part of our Faith and to think otherwise trends towards the very popular and modernistic Jesus-lite concept. It's almost an attempt to revise Sacred Scripture, you know, acceptance with great flair of the **nor do I judge you** but defintely leaving out the *go and sin no more* part because that would be quite messy and even unmerciful. (Really!!??) No matter, as Paul spoke, we, The Body of Christ, and not only the church hierarchy must instruct those who are wayward in the Faith. (GAL 6:1-2) Perhaps I bear sin here also as I am most imperfect yet I strive towards perfection otherwise my beliefs and actions are stagnant and therefore without any growth. I only point out the sins of Francis that he may consider his errors so as to correct them. Beware those who consider "Man" to be incapable of error. Beware those who claim a lock on the insight given by the Holy Spirit. The Spirit calls us not to be popes but to be Saints and to educate and save the individuals who deviate from Christ.

Hopefully the next Pope will undo the turmoil and confusion of the Francis pontificate. I've had enough of his "noise."

Without equality for women, equal sacraments for all members, and that means the same opportunities for women to be ordained priests, bishops, made cardinals and popes, and same treatment without any discrimination based on gender, race or any other bias, we will continue to shrink, as a church, in any country that is largely literate.

It is not enough to say this pope was better than the last two. He needs to be a bringer of genuine justice and so far he has not been that.

He could have chosen to be the one who really changed our church from an institution of misogyny back to a real Church of Christ, as the gospels demand, one showing love for women the same as men. He could have been this desperately needed bringer of Christ's love and hope to our Church from the start of his papacy but he has not done so and still does not do so. I cannot yell hooray! for a pope who ignores the indignity and abuse this church has committed against its sisters for over a thousand years within it's sexist laws and based on no teaching Christ ever taught or would support.

Shame on us for expecting so little.