In 1219, St. Francis crossed Crusade lines to meet Egypt's sultan. What can we learn from their encounter? 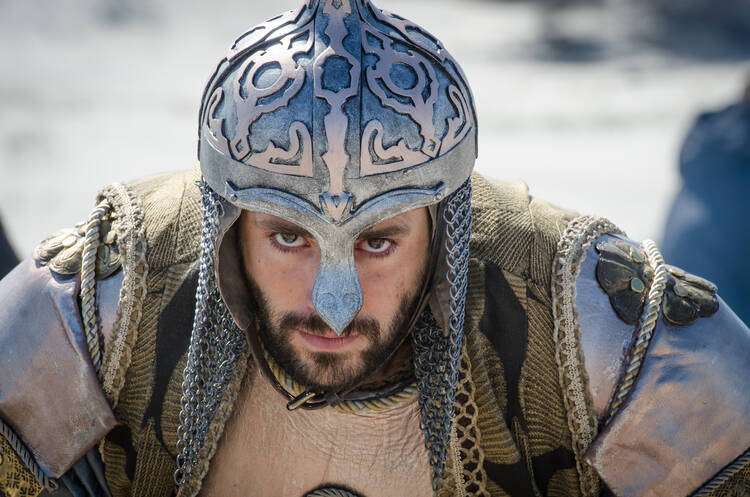 Zack Beyer portrays Egyptian Sultan Malek al-Kamil in the documentary "The Sultan and the Saint," which premieres Dec. 26 on PBS. (CNS photo/UPF)

WASHINGTON (CNS) -- A moment in time that has been captured in art has now been captured on film and could hold a powerful lesson for us today.

The encounter in 1219 between St. Francis of Assisi and Malek al-Kamil, the sultan of Egypt, during yet another flashpoint in the long history of the Crusades -- the subject of one famous fresco in Assisi, Italy -- has been made into a documentary. "The Sultan and the Saint" will get its nationwide premiere Dec. 26 on PBS (check local listings for dates and times).

Not surprisingly, members of the order St. Francis founded participated in the documentary's making.

It is the story of the saint leaving Assisi to cross enemy lines and meet with the sultan in Damietta, Egypt, during the Fifth Crusade. The two discussed interfaith conflict, war and the search for peace.

Franciscan Father Michael Cusato had written four scholarly articles on the encounter. "That's how they found me," he said of the filmmakers.

Father Cusato said his input on the developing script was valuable. "It took quite a bit of dialogue back and forth. They're neither Franciscans nor do they know our history," he told Catholic News Service in a telephone interview.

"People (involved in the project) are trying to read this encounter from the perspective of their own religious tradition," Father Cusato said, while he specializes in the medieval Franciscan world.

"The sources upon which the encounter are based are not exactly straightforward historical sources. They are called hagiographical sources. They were written about Francis for (support of) his canonization," he said. "A person like myself spends his career fine-tuning the lens through which you read these texts. You can't read them as history, but you can derive history out of them. I think that's been one of the major revelations that developed in the course of doing the script for the film."

"The Sultan and the Saint" could serve as a model for interreligious dialogue today, Father Cusato said: "I think that is precisely the purpose of the producers of the film. I believe the company's called Unity Productions, and they are a group of Muslim individuals whose raison d'etre is really to present a very different view of Muslims, especially through American society, than what is bandied about in the popular press."

"The Sultan and the Saint" could serve as a model for interreligious dialogue today.

The Franciscans' own take on St. Francis' encounter, he added, has adjusted to take into account the 9/11 terror attacks, when Americans saw Muslims in a different light.

"It was a decidedly negative version and vision of Islam," he said. "It kind of reminded us Franciscans into remembering that in our own tradition, we have a rather unique story about how Francis met the sultan. They had a conversation under the tent of the sultan, and he (the sultan) was completely transformed by that culture. We like to think it was completely transformative on the other side. We take that tack in the film, that both men were transformed by the encounter."

A second Franciscan, Father Michael Calabria, was interviewed on camera for the documentary. He is director of the Center for Arab and Islamic Studies at the Franciscan-run St. Bonaventure University in New York.

Before that, Father Calabria was a chaplain in residence at Georgetown University, and he met one of the producers in Washington years ago during an event at the Center for Muslim-Christian Understanding at the Jesuit university. "He described the project to me and not only being a friar but being a scholar and a student of Islam. I couldn't resist being part of this endeavor," the priest told CNS.

"Both men were transformed by the encounter."

He said he's seen the documentary three times, and "every time I see it I find that I am genuinely touched by the film, the beauty of the way that the relationship between Francis and the sultan is portrayed."

It's not just him holding "The Sultan and the Saint" in high regard. At one screening at St. Bonaventure earlier this year, Father Calabria said, "it was very well received by the university community. There were also members from the local Muslim community there. They got on their feet and applauded at the end of the film."

I am looking forward to seeing this. Thank you for the heads up. Particularly intriguing is the meeting between Islam and the Franciscan vision, and how that dialogue changed both Francis and the Sultan. I wonder if they each saw something in the other that was in themselves?