David Hockney is popular, but is he a great artist? 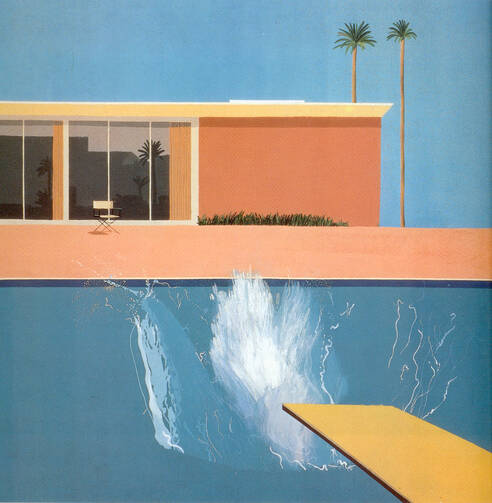 David Hockney (b. 1937), Britain’s most celebrated living artist, turned 80 in July, giving museum curators in London, Paris and New York an occasion to mount a retrospective of his work over the last 60 years.

The exhibition “David Hockney” began at the Tate Britain in London and traveled to the Centre Georges Pompidou in Paris. It has now opened at the Metropolitan Museum of Art in New York City, the show’s final location. From Nov. 27, 2017 to Feb. 25, 2018, viewers can see for themselves Hockney’s mastery of drawing, painting (in watercolor, acrylic, oil and on the iPad) and photography.

While Hockney’s greatness as an artist is an ongoing debate, the popularity of his work is beyond dispute. “A Bigger Splash” (1964), for instance, has become a cultural icon, with its flat-roofed California house, palm trees, pool and a splash with no sign of the one who caused it. We see the artist’s sense of play here and the result of his experiment: to paint water suspended in air for a fleeting second. (“It took two weeks to paint the splash,” Hockney said with a chuckle at the press preview in New York.) “Mount Fuji and Flowers” (1972), in which a blooming narcissus in a bamboo vase is set against a watery blue background and a snow-capped Mount Fuji, is the best-selling postcard at the Metropolitan Museum.

While Hockney’s greatness as an artist is an ongoing debate, the popularity of his work is beyond dispute.

Yet Hockney’s images might not have been so accessible. When he studied at the Royal College of Art in London (1959-62), Abstract Expressionism still reigned. His early works show an engagement with the expressionism of Jackson Pollock and the Cubism of Pablo Picasso. But Hockney soon began to blend representation (almost anathema at the time) and abstraction in portraits, landscapes, cityscapes and interiors. His buildings are the geometrical grids of Minimalist art and Modernist architecture; his people and interiors are constructed of simplified shapes, sometimes flattened, sometimes imaginary or remembered, rather than painted from life. And his paint application is meticulous.

Hockney’s choice of vivid colors, sometimes referred to as a “Matisse palette,” are also popular. One might think of Hockney as a Matisse for our time, designing sets for operas and creating drawings and films big enough for viewers to inhabit.

Hockney’s early adoption of the iPhone and iPad as tools for drawing, painting, photography and video convey more than technological acumen, rare enough at his age. By relishing new technology the artist demonstrates his place in the vanguard and communicates his ideas to larger, younger audiences. Several of Hockney’s Polaroid collages are on view. The Polaroid that seems quaint now was “new technology” when Hockney made these works.

One infers from his writings and the works in the retrospective that David Hockney has spent decades expanding both the spaces within his works and the perspectives of those who look at them. He wants viewers to experience the places he makes visible.

The retrospective begins with the artist’s adolescent works on sexual identity and homosexuality (the “Love series”), acts criminalized until 1967 under British law. These works evince raw power and indignation. Later, in crisp, nearly life-sized, dual portraits—refined, restrained, even corporate looking by contrast—Hockney explores the various relationships of patrons and friends. He invites viewers to look slowly at each tableau to understand the relationship it presents.

Hockney moved to California in the 1960s. There he recorded on canvas his infatuation with the sunny culture and lifestyle. The Yorkshire lad also drove across the country and found a red-rock Southwest unlike anything in England. In his paintings of the Grand Canyon and his views from road trips, which amount to artist-as-motorist innovations, Hockney offers his appreciation of the American landscape.

Hockney has returned to Yorkshire in recent years, where he paints and films local places. In works like “Woldgate Woods, 6 & 9” (November 2006) and “Elderflower Blossom, Kilham” (July 2006), Hockney shows his neighbors the spectacle of nature that surrounds them.

Hockney has also adapted the Cubist idea of showing multiple viewpoints in a single work. In “Large Interiors, Los Angeles” (1988), for example, the artist shows viewers rooms in his own home. He has not fractured the space as Picasso or Braque would have done. Rather, the viewer seems to hover overhead, or to be floating above the room and its furnishings. The painting on the mantle is tipped up so a viewer can see its contents, as are wall paintings and the fireplace decoration. In a similar way, Hockney captures the experience of driving (see “Pacific Coast Highway and Santa Monica,” 1990). One follows the ups, downs and curves in the road and takes in the view ahead and on both sides—all at once.

Hockney’s preoccupation with multiple perspectives can and should be broadly applied. To preserve the environment means looking not from our own backyard or from our own nation, but from the wider vantage point of the planet’s air and water. To promote peace and prevent war means considering the viewpoints of people and groups unlike ourselves. These are examples of multiple perspective too.

Overall, Hockney’s subject is the very act of looking. When he looks, Hockney tends to showcase beauty. It is part of his stance against despair.

Is Hockney a great artist? Surely he has great technical skill and range. But if gravity and relevance are given any weight, the scales are tipped even further in his favor.